"I learned a lot, and improved a lot, but now is what I’ve always dreamed
of: fighting in the UFC, at lightweight, at home, on pay-per-view in
front of 20,000 people." - Mike Ricci 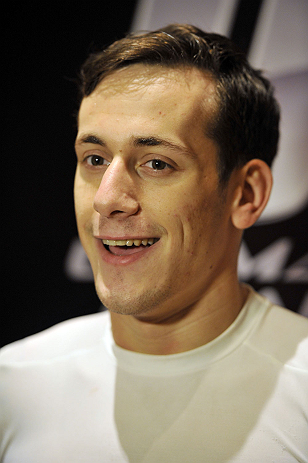 When you’re young and into sports, you envision yourself competing at the highest level.

The game of street hockey with your friends isn’t taking place on Caledonia Avenue; you’re playing at Joe Louis Arena, for the Red Wings, in Game 7 of the Stanley Cup Finals. The basketball court up at the park transforms into the Staples Center, and you’re the new Kobe, doing your thing on the way to another championship ring.

No matter what sport you’re playing, the roar of the home crowd is so real in your head that you swear you can hear it on the wind. The silent play-by-play recited with each step, each move, and each shot becomes audible as you rise up to stroke the winning jumper.

From the time he decided to become a professional fighter, Mike Ricci envisioned himself fighting at home in Montreal, before a ravenous packed house at the Bell Centre, walking towards the Octagon for a bout in the UFC lightweight division as part of a massive pay-per-view fight card.

Over his first 11 fights, the 26-year-old product of the renowned Tristar Gym has experienced different pieces of that dream independent from one another. He’s fought at the home of Les Habitants on a number of occasions, and always in front of passionate, partisan crowds. Last December, he made his first official appearance inside the Octagon at welterweight, losing to Colton Smith in the finals of The Ultimate Fighter.

Saturday night, Ricci will get to live out his dream exactly the way he’s always envisioned it.

“This is what I got started in this sport for, right – to be in the UFC, as a lightweight?” Ricci asked rhetorically. “The hand I was dealt played me into being a welterweight, being on TUF, and going through all of that – which was a great experience. I learned a lot, and improved a lot, but now is what I’ve always dreamed of: fighting in the UFC, at lightweight, at home, on pay-per-view in front of 20,000 people.

“I couldn’t really ask for much more; I get to live out my dream. Even though it’s just the beginning of my career, I get to do what I’ve been wanting to do for the last six years that one night. I can’t really describe (how it feels). I can explain the specifics, but the feeling I can’t really speak on; it’s hard to describe.”

While the feelings that fill Ricci as he thinks about stepping into the cage with Colin “Freakshow” Fletcher to kick off the pay-per-view portion of Saturday night’s UFC 158 fight card are ineffable, the engaging Canadian competitor is not at a loss for words when it comes to his motivation heading into this fight.

After making it to the finals on Season 17 of The Ultimate Fighter as a welterweight, Ricci had no answers for Smith in the finals, losing a unanimous decision to the active-duty member of the United States Army in a fight that can best be described as bland.

Advancing to the finals while fighting up in weight bought the now 8-3 fighter another kick at the can back down at his natural weight of 155 pounds, where he’ll meet Fletcher, who missed out on his chance to join the fraternity of Ultimate Fighter winners when he lost to Norman Parke in the lightweight finals on “The Smashes” the same night Ricci was controlled by Smith.

It’s an evening the long and lean lightweight has regrets about, not for his performance, but for his preparation, and he has actively worked to change the elements of that fight camp in order to avoid experiencing those same distractions and frustrations this time around.

“This fight has been completely about me,” Ricci stated flatly. “I have not focused on any social media; I’ve barely done any interviews. I’m done with everything else. I was so caught up with what everyone else was saying, what websites I was on, what interviews I was doing, and I fought that night in the TUF Finale for everybody else.

“I tore my (lateral cruciate ligament) about a month and a half before the fight, and in all honesty, I was sitting on the bench for four weeks. I probably shouldn’t have taken that fight, but I fought for everybody else. I was in the finale, the first Canadian, I was with a new management company, I was with the UFC, so I had to make them happy.

“I was so caught up in everybody else,” he continued, his frustration with the experience evident in his voice. “I was fighting for everybody else, worried about what everybody else was saying, and I kind of forgot where I came from, and how hard I worked to get to where I am. That has been the best part of this training camp for me, and now on fight night I get to go out there and do what I do best.

“I literally went over to The Ultimate Fighter thinking, `I need to stand up and knock these dudes out. If I do take them down, I have to be very cautious about how I use my energy.’ Now that I’m here at ’55, I can use all my tools – my jiu-jitsu, my wrestling, my striking – and I look forward to showing everyone and reminding everyone that I’m a lightweight.”

When this fight was announced as the opening act for this weekend’s main card, the MMA community questioned the decision. Here were two fighters making their post-TUF debuts, each having lost their last fight, being included on the pay-per-view portion of the show, while more experienced fighters with greater track records were relegated to the prelims.

Ricci understands the pushback, but is confident that no one will be complaining about his inclusion on the main card once he’s done sharing the cage with Fletcher on Saturday night.

“I understand that I came off a loss my last fight, but I think the UFC was happy with my performance on TUF as a whole,” posited Ricci, who will be fighting in his hometown for the eighth time in his career. “I understand that you’re only as good as your last fight, but as a whole for the show, I think they really appreciated what I did. The fact that I’m coming back down a weight class, I think my stock will naturally go up (as a result).

“I moved down, I’m from Montreal, I have a big fan base over here, and I think my fight is going to make a lot of noise, and a lot of people are going to show up to watch that fight,” he continued. “I understand how some people would question `Why is he on pay-per-view? He just lost,’ but I think if you look at the matchup stylistically, it’s very hard to see this fight being anything other than fireworks.

“Colin is a durable fighter; he’s always down to smash, always moving forward. We’re both tall, long lightweights, and my style – I could knock anyone out. He’s super-durable, he’s got great jiu-jitsu, great submissions, and so I don’t see how this fight could be relaxed for even two seconds.”

There is a chip on Ricci’s shoulder; a distinct pissed off tone to the things he says. Nearly three months later, his performance against Smith in the TUF Finale still irritates him, a feeling that is exacerbated by the fact that he’s watched it “over and over again,” as he puts it.

Saturday’s fight is partially about turning his dream into reality, but it’s also about erasing the real-life nightmare from December 15, 2012 from everyone’s memory, including his own.

“When I walked out on the TUF Finale – I’ve watched it over and over again – I don’t even recognize myself. I was barely into it. I got in there, and I just wanted to get it over with. I did damage control the entire fight. I went there just to get it over with.

“I think that when it comes to March 16, people are going to see a difference. They’re not going to recognize me, just like I didn’t recognize myself on the TUF Finale. I’m going to show up to fight and to win. I’m showing up to win this fight no matter what it takes. I’m not showing up just to get this over with.

“I don’t care whether it takes one minute to beat Colin or 15 minutes – the entire time I’m going to be attacking.”