"The way I was brought into martial arts, the way I was trained, the way I
was taught, it’s old school, and I don’t think very many guys are like
that" - Mike Ricci 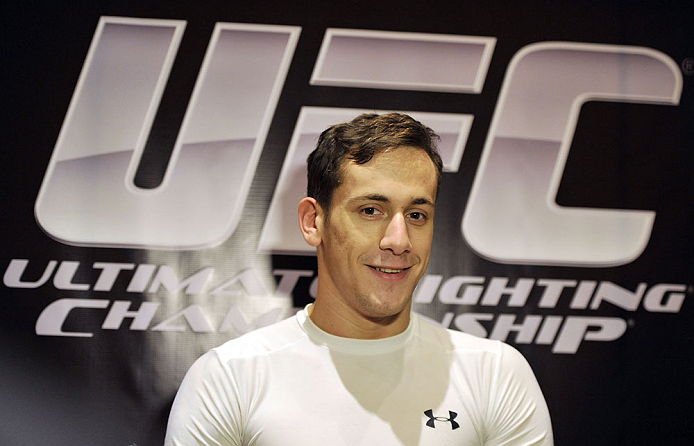 He’s only 27, seen as one of the young guns of the UFC’s lightweight division, but Montreal’s Mike Ricci has an old soul when it comes to his chosen profession.

That type of stuff earns an immediate level of respect, simply because it shows fighter who didn’t do this for the fame, the big bucks, or any of the other trappings that come along with being a pro athlete. And once you do make it, you can look back in pride (or shake your head in disbelief) at what you went through to get here. Ricci does both when talking about his fifth pro bout against fellow UFC fighter Jordan Mein.

“We smashed it out for six, seven hundred dollars,” he chuckled. “You get in there with Jordan for $600.”

No thanks. But it’s moments like those that make fighters, help them through the minefields of the fight game, and prepare them for that moment when they get to perform on the big stage. And yeah, losses are usually part of the equation. Not to say that Ricci reacted well to Pat Curran spoiling his then-perfect record in his first bout after the Mein fight.

“Once I lost my first fight, I didn’t really react to it in the best way,” he said. “I would have liked to react to it a little more maturely, but I took some time off to reflect. It was my road, it was the path I took, that’s what was supposed to happen, so that’s what happened.”

Ricci obviously rebounded, made it onto the TUF 16 cast, made it to the finals there, and then cemented his roster spot with a March win over Colin Fletcher. His opponent this weekend at UFC 165, Myles Jury, has yet to walk that particular stretch of road, as he’s currently unbeaten in 12 pro fights (including three in the UFC). It adds an added layer of intrigue to the clash of lightweights, as we look to see whether Jury fights to finish as he usually does, or fights to keep his “0” intact. Either way, Ricci is not concerned.

“I don’t really care what he gets up to that night; I’m just focusing on myself,” said the 27-year-old, one half of one of the best matchups on the UFC 165 lineup. It’s a fight Ricci wanted, and also one he thinks may not be the last between the two.

“I think the story with me and Jury is not gonna end this week,” he said. “I think it’s the telltale for a lot to come, and it’s a lot bigger than people think it is. I look at Myles Jury the way I look at myself: young, up and coming, and the next big thing in the lightweight division. I feel like the two of us are trying to break onto the scene and I could have taken some easier fights and padded my record and built my name and tried to portray this image of what I was, but I’m not phony like that. I feel like me and Jury fighting is going to lead on to way bigger things. We will fight and the fight will end there, but I think what’s coming for me and him in the future is very big. I’m very fond of Jury’s skills and his style of fighting, I think he’s going to be in the lightweight division for a very long time, I think he’s going to do very well, and I even see us fighting again.”

Ricci may be right on all counts, and if he’s not, at least he’s been bold enough to let the world know what’s on his mind. Most people wouldn’t want to throw hands with the talented Michigan native once, let alone more than that, but as the former TUF finalist admits, he’s “cut from a different cloth” than most of his peers.

“I think that people are just in this for the wrong reasons,” he said. “That’s why they don’t speak their mind and they have a filter. They’re always worried about ‘I should say this, I should say that, people want to hear this, people want to hear that,’ or ‘I’m doing it for this reason or doing it because I want to be on TV and impress this girl.’ You’d be surprised why some people get involved in our sport and all that stuff – popularity, being famous, Twitter statuses – I still feel like I’m one of the last fighters that’s known for fighting. Among the younger ones anyway. Coming up there’s a lot of bulls**t going on and I’m here to fight. I’m not here for any other reason and I don’t think there are very many guys that are like that. I was brought up with the old school. The way I was brought into martial arts, the way I was trained, the way I was taught, it’s old school, and I don’t think very many guys are like that. Now it’s all about what camp are you from and who you associate with. That’s not what I’m about.”

If that doesn’t make you a Mike Ricci fan, it should. But as far as he’s concerned, his honesty doesn’t come from any place other than a pure one – his job as a fighter.

“It’s the most honest thing you can do, my career,” he said. “There’s no lying in there. There’s no way around anything in there. The truth will find you. If you haven’t been training, if you’ve been messing around, if you haven’t been doing what you’re supposed to be doing, it’s going to show. If you’re mentally weak or emotionally weak, it’s gonna show, and that’s what it comes down to at the higher levels. That’s why the mental game is so big and your emotional status is so important. Because fighters will find that weakness in you and they’ll expose it. So I think it is the most honest thing you can do.”

So the job becomes not just training your body, but your mind, something Ricci does plenty of at the renowned Tristar Gym in Montreal. And once you do that, everything else should fall right into place.

“This Jury fight is very simple for me,” he said. “People can try to complicate it as much as they want, but it is what it is for me – it’s just another scrap.”