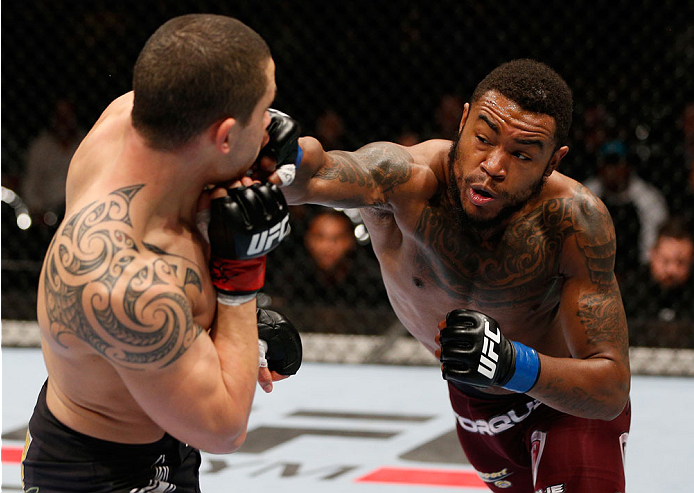 To use language that refers back to Mike Rhodes’ time on the hardwood as a point forward for Ellsworth Community College, the Roufusport product hasn’t exactly had a bunch of open layups since getting the call to the Octagon.

Assignment No. 1: make your UFC debut on less than two weeks’ notice and drop 36 pounds in the process.

Assignment No. 2: fly to New Zealand and face a tough, young talent and TUF Smashes winner on his home court.

Assignment No. 3: head to Brazil to share the cage with a heavily-hyped prospect coming off a loss in one of the most exciting fights of the year.

Those are contested jumpers with the clock winding down and the game on the line, but you won’t hear Rhodes offer up any excuses or complaints.

“The first fight got me through the process of all the ins and outs, the things you have to go through to fight in the UFC – some of the fight week stuff, dealing with the media, all those extra obligations,” the personable welterweight begins, reflecting on the takeaways from his first two appearances under the UFC banner, losses to George Sullivan and Robert Whittaker. “Obviously, losing that much weight in that short amount of time showed me how mentally strong I was and that I could step up and take that opportunity. 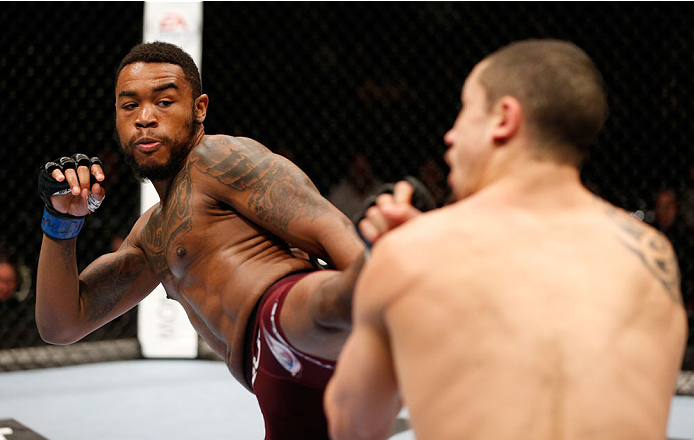 “As far as the New Zealand fight, I’d never traveled like that – that’s my first time out of the country, ever. Cutting weight, training, trying not to overuse my body or burn up my muscles while trying to cut weight while traveling like that, those are just experiences and things that I can take and apply to this trip to Brazil.”

Saturday night, Rhodes will share the Octagon with Erick Silva, the 30-year-old Brazilian who burst on the scene with a 40-second knockout win over Luis Ramos at UFC 134, touted as a future UFC welterweight champion by famous teammates. Though he hasn’t lived up to his advanced billing – or strung together consecutive victories – Silva remains a bundle of explosive power and dangerous strikes capable of handing Rhodes his third consecutive defeat.

Normally, a fighter in his position might beg off such an assignment – look to find something a little closer to home against a less daunting opponent, hoping to secure greater odds at picking up that elusive first UFC win.

But Rhodes has never approached his career that way.

During his time competing under the Resurrection Fighting Alliance banner, he faced off with future UFC colleagues Brandon Thatch and Alan Jouban, losing to “Rukus” before beating Jouban to claim RFA gold and earn his promotion to the big leagues. Now, even with his place on the roster potentially hanging in the balance
, “Biggie” welcomes the opportunity to face Silva in his home country and continue picking up the type of experience you can’t get anywhere else.

“Wins and losses are important, obviously – I want to stay in the UFC and I would like to win any fight that I’m in and we always train to win – but I could have never gotten these experiences and gained this kind of ring time and such without taking these fights,” the 25-year-old whose record stands at 6-3 heading into Saturday evening’s meeting with Silva, suggests. “I’ve never been the type of fighter to pad my record or try and fight guys that I thought were sure wins. I feel like everyone is a sure win for me, that I can beat anyone.

“I feel like this is the fight where my back is against the wall, but why not fight someone that is that good? Why not fight someone like Erick Silva, so that when I beat him and it’s a shock and a statement to everyone else, but I’ve always known myself that I can do it. I deserve to be in the UFC. I’m not fighting bottom tier guys – I’m fighting a guy that was main eventing UFC events or getting ready to break the Top 10 and that’s an experience you can’t take away from me. 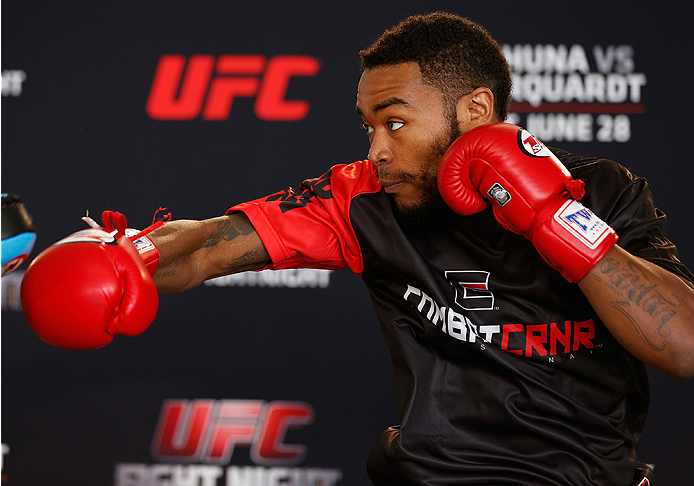 “My idea of being a fighter and my mindset is that if you’re in the UFC and anything but the belt is on your mind, you’re doing it for the wrong reason,” Rhodes continues. “We train and put our bodies through so much that if guys want to hang around and be gatekeepers, stay around and fight lower-tier guys just to say they’re a UFC fighter, they’re taking damage and beating themselves up for no reason.

But Rhodes doesn’t anticipate having to depart the UFC to further hone his skills. Having watched his teammates (and former roommates) Anthony and Sergio Pettis pick up victories at UFC 181, he fully expects to keep the Roufusport momentum rolling by heading to Barueri and opening a lot of eyes by collecting a victory over Silva.