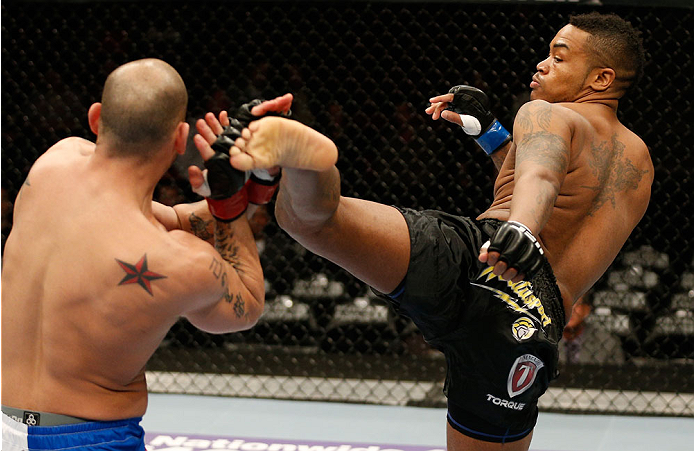 When I asked Mike Rhodes, "What's up, man?" I could not have, in a million years, predicted his response.

"Is that like a block of ice in front of a fan?" I ask. Apparently, it also involves some PVC pipes and is slightly more elaborate, but it shows that just getting into the UFC is only the opportunity - the open door if you will. You've still got a ways to go to get to the top of the heap.

"The [real] air conditioner can wait. The first summer in Milwaukee, I was staying with Erik Koch," he recalls. "We didn't have electricity, we didn't have anything. I was working at a bar and we just paid rent and stayed at the gym all day. I still don't have air conditioning or cable, my car headlight is duct taped in... But that's okay, I'm not above that. I'm chasing the dream and trying to make a living at it."

Mike "Biggie" Rhodes is no stranger to struggles. He clearly chose this path in life out of love, with no illusions that it would be an easy road.

Adopted by his great-aunt and never really knowing his parents, Rhodes didn't have an easy childhood, and that sensitive subject was the first thing would-be bullies would bring up to get under his skin. This is when he had his first taste of fighting.

"Fighting in the neighborhood," he says, "you had to build an image that you'll stick up for yourself and you won't back down from anybody in order to survive in an environment like that. You don't wanna be seen as easy prey. I wasn't an angry person. I was like I am now, a happy person, and I got along with most everybody. But there were always certain people that would pick on you and cause you to flip that switch."

Now that "Biggie" fights professionally, that ability to "flip the switch" still serves him well.

"It's a sport," he says. "Until you get in that cage and you flip that switch and then it's different from sparring."

The leap to fighting professionally wasn't the original plan for Mike and it didn't happen until years later. Initially, basketball was his ambition. "I wanted to go to the NBA and I wanted to play at a Division One school," he says.  But an injury in high school led to gaining a lot of weight. He was up to 273 pounds - which is how he earned the nickname "Biggie." Despite being out of shape, his talent was enough to get him on the junior college basketball team. Fatefully, his coach implored him to get in shape. So he took a cardio-kickboxing class that accomplished the goal of losing weight and getting in shape, but it also ignited a passion for the martial arts.

He fought a couple of amateur fights in his home state of Iowa and went 2-1 before visiting Duke Roufus' gym in Milwaukee. Duke saw his potential and invited him to train. Despite having some regrets about not accomplishing what he set out to accomplish in basketball, Mike knew that fighting was what he wanted to do, and he speaks about getting the MMA bug with no shortage of passion.

"When I fought for the first time, I just fell in love with it and I felt like I was destined to do it... All eyes on me, one-on-one, not depending on anyone else, being under those lights, all the attention... I love that feeling. It made me get kind of addicted and it made me want to train more and eat healthy and it got to the point where I thought I could be really good at this. I could be the best in the world, and from then on I just wanted to fight."

So he finished the semester and moved out to Milwaukee to train full-time, with the UFC being his new goal. While he has accomplished that goal, his UFC debut against George Sullivan resulted in a decision loss. It's a fight that Mike thinks he should've won and he believes the stats back him up. However, he concedes that Sullivan was more aggressive and that's what won him the decision. Yet when all is said and done, Biggie blames Biggie. "I was out of shape," he admits. "I was hanging out in Sacramento with the Team Alpha Male boys and having a good time partying it up, and when I got back home it was my birthday, then Christmas and New Year’s. So when I got the call eleven days out I had to cut 36 pounds. I didn't have my normal gas tank. But I got my shot and I took it. You don't say no to the UFC."

I ask him if the so-called "Octagon Jitters" were a factor and Biggie dismisses that completely. "It might happen to certain people, but fear isn't real in my mind,” he insists. “Why should I be afraid of something that might not even happen? People allow fear to creep into their heads and ultimately make it real. I don't get nervous. I trained for the fight and I know what I'm there to do."

Having the ability to push aside fear is going to be an invaluable skill for Rhodes when he faces TUF: The Smashes winner Robert Whittaker on June 28th.

"I think it's a really big fight for my second fight in the UFC. He's going to be the toughest guy I ever faced," Mike admits. "He's dangerous everywhere. I watched him on The Ultimate Fighter when I was just starting out. He's been in the UFC as long as I've been fighting. I don't see too many things he lacks. I think whoever can perform better on that night is gonna come out with the win."

Rhodes is also aware that his opponent isn't the only thing that he'll have to overcome. "It's high stakes. It's on the main card and I have to deal with flying to New Zealand and dieting and cutting weight. Those are things I have to defeat as well," he says.

He is also keenly aware that coming off a loss, it's important to win impressively. "Not only do I have to beat him but I have to perform well to set my place in the 170 division," he says. "There are guys that are winning that are still being cut. First and foremost, you need to win, but it's also about how you perform. Are you going after it and are the fans enjoying your fights? If they're not, you're gonna get that ax real quick. Hopefully I can get one of those bonuses, but I need the win."

Win or lose, bonus or not, it's clear that Mike Rhodes won't be fazed by adversity. Having to struggle against the odds just means he's in his element.