"Next month I turn 39 years old, and if someone fights me thinking I'm old, just look at my last fight against Waldburger. I'm not out of it by any stretch." - Mike Pyle 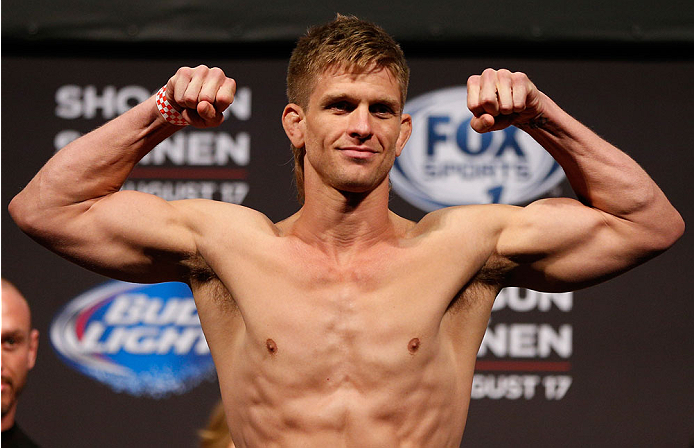 Mike “Quicksand” Pyle didn’t see the UFC welterweight title elimination bout between Matt Brown and Robbie Lawler last month, because just four weeks out from his own scheduled bout at UFC Fight Night in Tulsa this Saturday, he took the weekend off from training… to go fly fishing.

“I missed it,” Pyle says when asked what he thought of the fight, an instant classic. “I was fly fishing so I can’t really talk about the fight at all.”

It’s not something one expects to hear from a UFC fighter when his own division’s contendership is on the line, but Mike Pyle, 38, isn’t like any UFC fighter you’ll ever meet. In fact, the elder statesman in the sport is set in his ways after years and years of experience.

“I will go fishing on a Friday, Saturday and Sunday four weeks out before every fight," he says. “No matter the time of the year. I have to get away from all the sweaty guys in the gym trying to smash my face in. All I can hear is the river running beside me and a buddy saying 'I caught a fish.' Then on Monday I come home, I'm refreshed and rejuvenated and ready to go again. Coaches now tell me, 'Hey it's time to go fish.' They know when I start dragging, it's time to fish.”

Maia ended up being pulled from the bout due to injury, so Pyle will now face 24-year-old Jordan Mein in the co-main event in the BOK Center, a stylistic change from Maia that is as opposite as night and day.

“With Maia I was facing a world-class jiu-jitsu artist,” Pyle says. “Now I’m facing a world-class striker. I was spending a lot of training with Jake Shields, so when I got the news the biggest change we made is using a striker versus a grappler. I learned a lot from Jake and he pushed me really hard on the ground. He's a beast on the ground and he was in it to win it with me. He was keeping me sharp, because when Jake gets on you he smothers you, and if you make a mistake he will catch you, much like Maia would. Now I'm working with strikers and I'm going to have to use a lot more head movement against Jordan than I would have used against Maia. But the time I spent with Shields has gotten me in great shape.”

Many observers of professional sports would argue that someone just a few weeks shy of his 39th birthday’s idea of great shape would pale in comparison to a 24-year-old’s idea of it, but Pyle believes experience over youth will always prevail.

“Remember when MMA fights were only available on InHD,” he asks? “Well, that was in like 1999, and they used to call us ‘InHD Fighters.’ I was one of those. I was an ‘InHD’ fighter. So back then, we didn’t know much about fighting. We had maybe a boxing coach and barely a wrestling coach. We hadn't evolved, but now we have new training tactics, new equipment, and I've adapted with the sport. I've learned better ways to do things and I've been fortunate to be able to do that so that I can sit and have an interview with you and not slur my words or lose my train of thought, which is an unfortunate thing to see. Next month I turn 39 years old, and if someone fights me thinking I'm old, just look at my last fight against Waldburger. I'm not out of it by any stretch.”

Indeed, Pyle made quick work of TJ Waldburger back at UFC 170, with a first round TKO of the 26-year-old.

“Age only means I know how to train smarter,” Pyle says. “If my body tells me I need a rest, I rest. I can easily say ‘There’s no way Jordan Mein is resting right now. He’s definitely in the gym,’ and some guys would push through two-a-days just because they think they have to in order to win. That’s just not training smart. That’s what experience has taught me. It’s taught me to listen to my body. I know what I need to do to win. One of my greatest tools that I can attribute to my longevity in this sport is that I know how to change things up on the fly in order to get the win.”

Pyle is not a brawler, and that’s another thing he can attribute to his longevity. While some fighters will stand and take punishment in order to land one knockout blow, Pyle has always been more strategic.

“I know I’m tough; I don’t need to leave a fight with twenty stitches to prove it,” he says. “I don't get into big brawls or Rock ‘Em-Sock ‘Em robot fights. You don't see me come out of fights with cuts over my eyes or bruises all over my face, because I don't get hit much. When I do, I go down (laughs). I don't fight that way; I don't believe that's the art of war. I know I'm tough. I don't have to prove it by getting my face beat in and leave with twenty stitches; to me that's not art. I haven't taken a lot of the punishment, and it's not just on fight night when you have that kind of style. If you like to brawl then that's how you're training and doing that kind of s**t for eight weeks isn't always the smartest way to train for a fight. Those things take a toll on you and it makes you slow down a lot. Over the years I've learned a lot of things from different people on different ways to train, how to rest and recover, diet, and things like that.”

But while Pyle knows he’s got the advantage that age brings to any athlete, he also knows however young Mein is, he’s got just as many fights after beginning his professional fight career at age 16.

“Jordan’s dad (Karate instructor Lee Mein) did an amazing job with getting Jordan ready,” Pyle says. “I hope that if my son wanted to get into this business I am able to do the kinds of things his father did. He got the right training, he made sure he got the right fights to bring him along in his career, up to the big show. So if my son wants to be a fighter I want to be able to get him to wherever the Big Show may be when that time comes.”