"We’re just gonna go in there and whale on each other until somebody
gives up. Afterwards, maybe we’ll go have a beer or something, but until
then, we’ve got jobs to do." - Mike Pyle 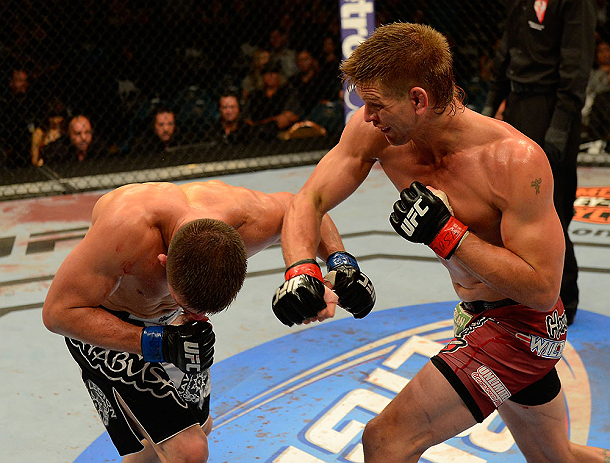 Mike Pyle had his summer all figured out.

After earning a hard-fought split decision victory over Rick Story at UFC 160, the veteran welterweight was ready to press pause on his climb up the divisional ladder in order to prepare for the birth of his first child. In the midst of the best run of his UFC career, the 37-year-old with a sweet mullet and Southern drawl was intent on spending time with his growing family, and – let’s be honest – putting his black belt in fly fishing to good use.

But you never know when opportunity is going to knock on your front door. When it does, the best laid plans of mice and men often go awry.

Three days into July, the UFC announced that Pyle would replace former title contender Thiago Alves opposite Matt Brown on the main card of the UFC on FOX Sports 1 event slated for Boston’s TD Garden Arena on August 17. Alves’ long road back to competition had hit another detour, but his bad break produced a chance that was ultimately too good for Pyle to pass up.

“Right after his birth, I wanted to be home and not have to be so focused on my fight, but that’s the way it is,” said Pyle, whose wife gave birth to a happy and healthy baby boy, Maximus Michael Pyle, on July 26. “They called and said, `Hey, we need you to step in if you can. We know you’ve got the baby coming – any way that you could work around that and make this happen, we’d appreciate it.’ So I did it, and here I am.

“It took some time -- sitting with the wife, talking about things, trying to see how she could be comfortable here alone without me for a week with a newborn baby in the house. It’s not like we’ve just gotten a puppy.

“It was a big decision for us, and I’ll tell you right now that I took some time, but in the end (I agreed to take the fight). I’m just glad we got a nice cool little baby that doesn’t fuss too much. He likes to rest.”

While his son and his wife remain in Las Vegas, Pyle will be making like the Dropkick Murphys to step into the cage with Brown.

Like Pyle, Brown too is in the midst of the best run of his career inside the UFC Octagon. He rebounded from a UFC 139 loss to Seth Baczynski with a victory over Chris Cope two months later, and hasn’t looked back since. In April, the tough-as-nails Ultimate Fighter alumnus extended his winning streak to five with a second-round TKO win over promising Canadian Jordan Mein in one of the most entertaining scraps of 2013.

“Matt’s been on a tear right now – five wins. There are not a lot of people right now that are on those kinds of streaks, unless they’re champions. That says a lot. He’s doing his work. I’ve been doing my work. We’re going to get together, and it’s gonna be a fight. It’s gonna be a helluva fight.”

It’s also a bout that continues the run of big fights with championship implications that started with the UFC on FOX 8 bout between Rory MacDonald and Jake Ellenberger, the only two men to get the better of Pyle over his last 10 outings.

Business picks up again this weekend, as Pyle and Brown look to cement their places in the pecking order within the 170-pound ranks heading into the final four months of the year.

But Pyle’s decision to accept this bout wasn’t predicated on furthering his push for a title shot or getting a quick chance to rebound from a frustrating – albeit successful – outing against Story back in May.

“I wasn’t completely pleased with the way I performed,” explained Pyle, who pushed his record to 25-8-1 overall with his win over Story at UFC 160. “Now that I look back, in that first round, he hit me with a big shot that took a lot of steam out of me, but I was still able to take what percentage I had left and get the job done.

“Unfortunately, Thiago was hurt, and that sucks, but sometimes in this sport, there are opportunities, and there was an opportunity for me, and I took it.

“This turnaround is let’s get another win, let’s get some more money. It’s about getting paid for this one, and taking advantage of an unfortunate situation, and making it something positive.”

It’s also about sharing the cage with a fellow veteran, a friend, and a fighter he knows is going to bring the heat from the opening bell as well.

“He’s a powerful dude; he’s gonna be bringing it. I’m gonna be bringing it,” Pyle said with a laugh. “Matt and I know each other. We’ve known each other for a few years, training around here in Vegas. We’ve trained together, been to gym barbecues, and just hanging out. I know him, his wife – Matt’s a cool guy. We’ve slugged it out on PlayStation before, sitting around the house, but he and I both have families to feed. We know what we’ve got to do.

“Just because we know each other doesn’t change the fact that we’re fighters and we have to fight. That’s our job. He wouldn’t have turned it down, I’m sure. It’s a good opportunity – FOX Sports 1, an opportunity for both of us to be featured on the main card; it’s good for everybody.

“We’re just gonna go in there and whale on each other until somebody gives up. Afterwards, maybe we’ll go have a beer or something, but until then, we’ve got jobs to do, and we’re both going to perform, guaranteed.”