"I need to go in there and do my absolute best to put this guy away, and
keep promoting myself; calling guys out and climbing my way back up to
where I want to be." - Mike Pierce 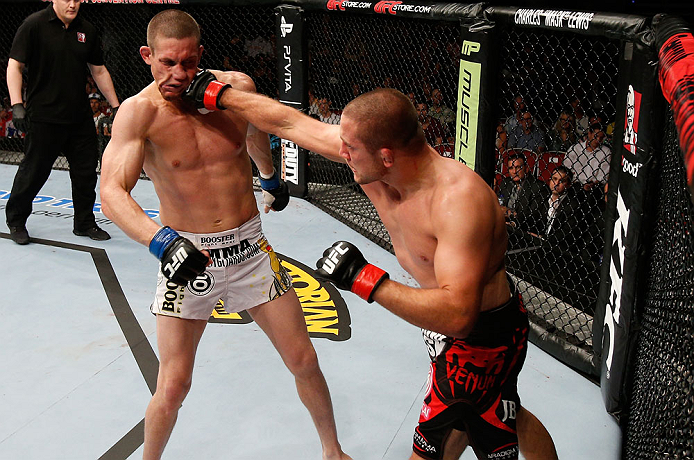 Mike Pierce sports an 8-3 record in the UFC.

Of the three men to beat him, only Johny Hendricks has yet to fight for a title, and that fact will change come November, “Good Lord willing” as Hendricks would say.

Next Saturday night, the 32-year-old Portland, Oregon native will return to action at UFC 162. Rather than taking on a fellow fringe contender in a preliminary card bout feature on FX, Pierce will serve as one half of the opening act, squaring off with David Mitchell in the first bout of the fight card, one fight before Baczynski welcomes Brian Melancon to the Octagon for the first time in his career.

“I saw that he was on the card the other day because I haven’t been paying attention,” Pierce said of Baczynski and their respective placements on next weekend’s fight card. “And I saw that he was fighting a new guy too, so I find that a little weird.”

If it wasn’t clear before, Pierce’s positioning on the UFC 162 fight card stands as a clear indication that when it comes to moving up the competitive ladder in the Ultimate Fighting Championship, it takes more than just winning.

The Sports Lab Fight Team member has amassed victories, but of his eight wins inside the Octagon, five have come by way of decision. Of his 11 UFC appearances to date, eight have made their way to the scorecards. While going the distance with contenders like Hendricks, Koscheck, and Jon Fitch remains a feather in the former Division I wrestler’s cap, his grinding, “good chance this is going 15 minutes” style doesn’t do him any favors when it comes to increasing his “I want to see that guy” factor with fans.

It would be understandable for fighters in Pierce’s position to rant and rave in the media about searching for his fourth consecutive win on Facebook while athletes with fewer accomplishments under the UFC banner earn television time.

Though he’s undeniably frustrated by the situation, that’s not the route the 16-5 welterweight is opting to take. Instead, it’s “message received” with designs on advancing further up the fight card next time out after dispatching Mitchell.

“I’m coming in here with a little bit of an attitude and pissed off, and I’m going to do everything I can to put this guy away quickly and in dramatic fashion.”

While fans will always clamor for highlight reel finishes and the UFC will continue to encourage fighters to leave it all in the cage, there is a danger for fighters when it comes to deviating too far from what has worked in the past in order to deliver the type of performance that appeases both the audience and the UFC brass.

“First and foremost, winning is the most important,” begins Pierce. “You always want to win – that’s number one I think – and if you happen to get a great finish, that’s icing on the cake to me, but there are other elements (at play) in the sport of MMA that help catapult your career.

“Sometimes you have to do things out of character in order to try and get the upper hand, but it’s definitely a difficult battle. On one hand, you want to win, but if you don’t win, that’s usually worse than if you win and have a poor performance.

“You go in there with a particular game plan - you’ve been training for a while, you think you know what he’s going to do, and you have weapons in your arsenal to deal with that - but sometimes those things don’t always come together, and you just have to find a way to win. Sometimes that ends up being a boring, grueling grind, and sometimes that ends with a quick knockout; you found something that connected and got your hand raised with a finish.

“It’s really hard to balance that, and I’m not the only guy that has struggled with that.”

Inside the cage isn’t the only place Pierce is looking to make some changes either; he also plans on putting more of his personality on display outside of the Octagon. But just because he’s a well-spoken resident of the Pacific Northwest, don’t expect him to follow the trail blazed by a certain “Gangster from West Linn” any time soon.

“It won’t be as dramatic as Chael,” laughs Pierce. “That guy has got that act down cold, and I don’t want to try to imitate it because it would look horrible.

“My antics with Josh Koscheck at weigh ins with the wig and all that stuff - playing to the fans, telling them how I was the guy that wanted to beat the crap out of him because no one likes him, which is still generally true, those are things that I want to do, and bring back to the light.

“It seems like I was getting close (to breaking through) with the Koscheck fight, and that’s kind of what I need to get back to again. I need to go in there and do my absolute best to put this guy away, and keep promoting myself; calling guys out and climbing my way back up to where I want to be.”

For all the criticism that has been directed at Pierce for his performance and all the discussion of areas where he needs to improve, you would think he was stuck on a losing skid, but that isn’t the case.

In one of the most competitive divisions in the UFC, he’s put together a three-fight winning streak, and earned himself a place in the top 20 of most rankings. As much as there are always things to work on, the past year has brought far more successes than failures.

“That’s the internal dialogue I have with myself frequently,” he admits. “I have had a lot of success in the UFC, and have a couple very close decisions that had they gone my way, my career would be in a completely different light right now, I imagine. I do think about it – maybe I would be in the top 10 right now, and fighting on the main card, looking at a potential title shot down the road, who knows?

“That’s just not the case right now,” says Pierce sharply, pivoting from what could have been to the task at hand. “I have to deal with reality, which is that I have David Mitchell on July 6th and that’s the only thing I care about right now.”

A submission specialist who posted a perfect 11-0 mark before being called up to the big leagues in 2010, the 33-year-old Mitchell broke through to collect his first UFC victory last time out, earning a unanimous decision win over Simeon Thoresen back in January.

As far as Pierce is concerned, there is no reason he shouldn’t be able to push his own winning streak to four, while opening things up in the process.

“I’m definitely prepared for David. I don’t think that he has any tools in his arsenal that are going to nullify any of mine, so I see myself being able to take some of those risks, and hopefully get that finish.

“Frustrations aside, I’m focused and ready.”