Mike Pierce - From Learning to Lose to Fighting to Win

"I’ve been on a little bit of a roll lately, finishing my last two guys, and the last one was a knockout, and that’s something I’d like to continue." - Mike Pierce 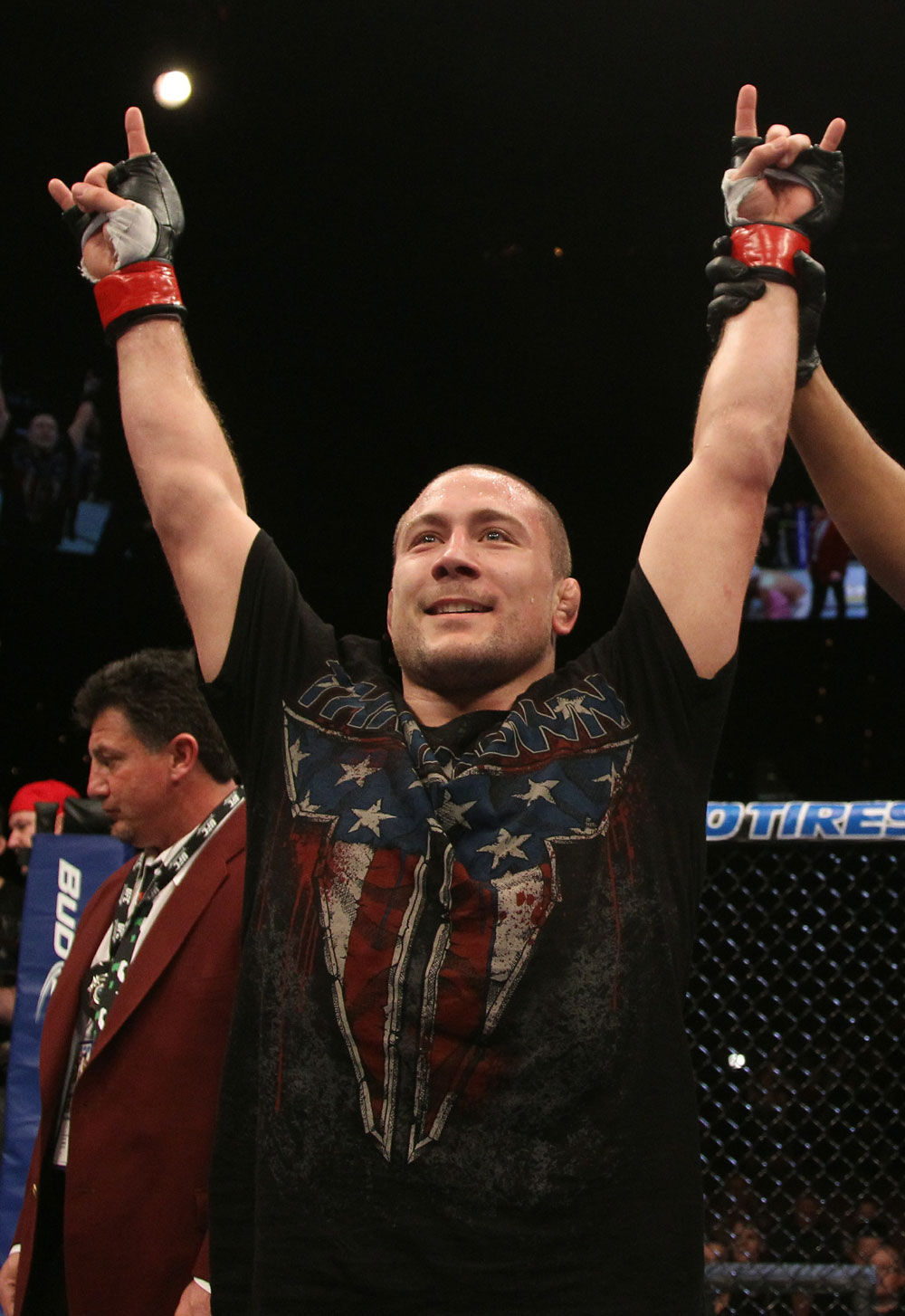 Coach Bruce Robnett didn’t pull any punches when sophomore Mike Pierce walked into the Barlow High School wrestling room to prepare for his second year on the mat.

Not exactly the rah-rah, you can do it, stuff you hear on afterschool specials, but wrestlers and their coaches never were the sentimental type. And after what he described as a “fun” freshman year, the teenage Pierce did get a particularly harsh dash of tough love that second season.

“I really got beat on sophomore year,” said Pierce with a chuckle. “It was frustrating because I was losing, but at the same time I could see the progress I was making, and then after that year I stuck it in my head ‘okay, this is my year.’ And I went from not placing at State the previous year to winning the State title the next year, so that made me feel good.”

In all, Pierce took home two Oregon State championships during his high school career, in 1998 and 1999, and in addition to his own determination and talent on the mat, he can also thank Robnett and a teammate who remains a training partner in his current gig as a mixed martial artist, WEC vet Dave Jansen.

“He was the guy I had the biggest rivalry with and he would kick my butt,” said Pierce of Jansen. “I would literally challenge him every single week for the varsity spot and he would beat me every single time. But then that junior year, we were in different weight classes and I ended up doing really well and winning state. It was us two pushing each other and beating on each other that made us better.”

Pierce went on to wrestle briefly at Portland State University before eventually settling into the world of pro MMA in 2007. He has since won 12 of 15 bouts, including nine of his last 10, with his only loss in that stretch coming to top welterweight contender Jon Fitch. But despite his success, Pierce is still seen as being in the prospect stage of his career, something he would like to change with Saturday’s UFC 133 bout against fellow wrestler Johny Hendricks.

“Facing another wrestler is always fun,” said Pierce. “We kinda know each other’s game, we’ve been doing it since we were kids, and so it’s the other facets of the game that become a little more interesting. I see Johny Hendricks and me being an exciting fight. I don’t think this is gonna be a fight you’re gonna see ground out on the floor. I don’t see that happening. I see us being more on the feet, in the clinch, working in the open or maybe against the cage, but I think it’s gonna be more of a standup battle than anything, and I’m looking forward to that.”

And even though the 30-year old Pierce is far removed from his high school days, in recent months he’s realized the wisdom of Robnett’s words to him before his sophomore wrestling season, and he has learned the value of patience. Don’t mix that up with content though.

“I want to hurry up because like (UFC President) Dana (White) says, your window of opportunity in this business is only so long,” said Pierce. “Nobody can do this forever unless you’re Randy Couture. (Laughs) Everybody’s got a finite amount of time in this business, so my goals are what they are and I’d like to get there as soon as possible. But at the same time I know I can only do it at a particular rate.”

But given the limited amount of time each fighter can realistically compete in the Octagon each year, every trip from the locker room has to count, and Pierce, a UFC vet since 2009, has grasped on to that reality with both hands. Winner of three in a row, the Portland native has finished his last two fights, submitting Amilcar Alves and knocking out Kenny Robertson. It’s a stark contrast to his decision wins over Brock Larson and Julio Paulino, which got fans up in arms about his inability to decisively end fights. But after the last two, he’s suddenly in their good graces again. Welcome to the fickle world of pro sports.

“I’ve read all the good stuff and all the bad stuff and something that people always complained about before was ‘oh, he just does decisions, there’s nothing exciting going on,’ but at the same time, some of the guys that I was fighting were tough guys,” said Pierce. “Jon Fitch was my second fight in the UFC, and I came close. I tried to finish the guy – everybody saw that, but it still came out a decision not in my favor. I like to finish, I don’t like leaving things up to the referee or the judges, and I don’t think any fighter does. But I’ve been on a little bit of a roll lately, finishing my last two guys, and the last one was a knockout, and that’s something I’d like to continue. I think I have the capability to do it, and that’s what I’m looking to do in this fight.”

What makes Pierce scary and a legitimate threat to his fellow welterweights is that even though he comes from a wrestling background, he has shown the ability to handle himself wherever the fight goes, and to do it with an ease that’s impressive. You don’t see him winging wild shots or shooting for takedowns from 20 feet away. If he can take you down to the mat and beat you there, he will; if he has to stand for 15 minutes or less, he won’t get flustered. In other words, he’s hard to decipher simply because he’s adaptable.

“You just have to be open minded in the training room, listen to your coaches, and try to put something together that is mixed martial arts,” said Pierce. “There are guys that go into the training room and they learn boxing or Muay Thai and they forget how to mix that up and transition into an MMA fighter. Instead, they’re in boxing mode or Muay Thai mode and then they go to wrestling mode. There’s a fine line in there where you gotta learn how to mix all that together and make it mesh and flow. That’s what I’ve always been trying to achieve – finding a style that meshes really well and where I can transition really well from one to the other.”

He seems to have found that style, even if the old Mike Tyson line that everyone has a plan until they get hit still applies at times. The trick is trying to reduce the percentage of times it does happen.

“It takes a long time and a lot of repetition to get it burned into your head to where it doesn’t even become a thought process, it’s just a reaction,” he said. “And what Tyson says is true; there are a lot of times when even the best of us get smacked pretty hard and we revert back to what we know. We go into that survival, freak out mode (Laughs), and you know what you do best, so you try and hang on to that. But there are times when you gotta just think for a moment about what you need to do instead of what you’ve always done.”

Aiding in this process are a couple of pretty fair fighters in their own right, Pierce’s training partners for the Hendricks bout, Chael Sonnen and Nate Quarry, who have had plenty of good advice for their gym mate about MMA in and out of the Octagon.

“These guys have been my training partners for this whole camp and even at this tail end I’ve been working with (middleweight contender) Yushin Okami because he’s in town getting ready for his fight,” he said. “Between all those guys, they have a wealth of experience and they have pointers here and there about what you should do on the business side of things or what might help, so you’ve got to take all those things into consideration and hopefully it pays off in the end.”

If he keeps winning, it’s about to. Pierce’s record speaks for itself: 12-3 with three UFC wins as well as victories over Paul Bradley, Justin Haskins, Mark Miller, and Mike Dolce. Plus, he’s on a two fight finishing streak and he gave Fitch a tough scrap in his lone Octagon loss. As Bruce Buffer would say, “It’s time.”

“I hope so,” he said. “They sent me Jon Fitch in my second fight, which is a huge honor and not very common that they’d throw a newcomer one of the top contenders in the weight class. I think I handled myself pretty well. I did better than probably 99 percent of the people thought I would do, and I really only improved since that fight. So I think after this fight I’d really like to get a little deeper into the mix and work my way to the top. That’s really what I want to do.”

And when a wrestler puts his mind to something, it’s hard to break him loose from it.

“There’s something about wrestlers,” said Pierce. “They have a mental toughness to them that’s just inherent to the sport. You’ve got so many levels of discipline – you have to maintain a particular weight, you’ve got to watch your diet and you’ve got to work out a lot, and learn different techniques - so I think the amount of discipline that’s involved in this sport by nature makes these people tougher if they really want to be serious about it.”