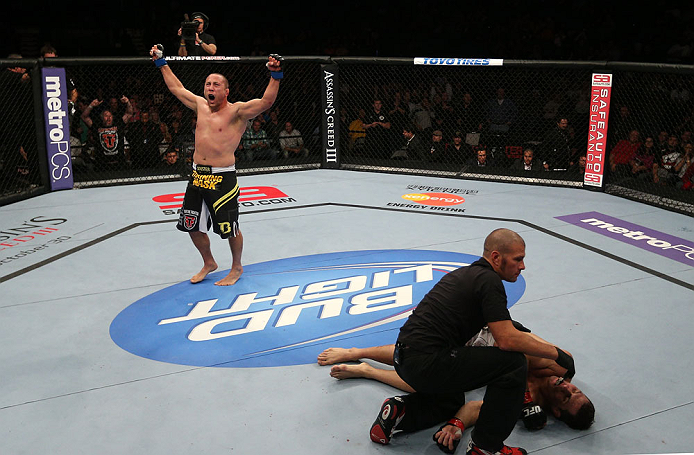 Mike Pierce doesn’t have a nickname.

He doesn’t have any tattoos, dyed hair, a chiseled physique or a walkout song that makes you think, “Here comes Mike Pierce” when it kicks in over the sound system. He’s never been featured in ESPN’s Top 10 Plays of the Day. There are no clips of him in the UFC’s pre-main card introduction video set to The Who’s “Baba O’Riley” that gives everyone in the arena chills as they watch it.

He doesn’t cut scathing promos on other welterweights when his fights are over or lobby for title shots on Twitter. He doesn’t complain when he’s slotted on the preliminary portion of the card either.

When his name is on the fight card, he shows up on weight, ready to fight, and when it’s his turn to step in the cage, Pierce punches his timecard, and then proceeds to wear out the unfortunate soul who signed up to spend 15 minutes locked in the Octagon with him.

There is only one way to describe the Mike Pierce and his fighting style – he’s a grinder.

“I’m obviously a fan (of the grind),” laughed Pierce, who is making a quick return to the cage after stepping in for the injured Kyle Noke against Seth Baczynski just two months after defeating Aaron Simpson on the October FX card in Minneapolis, Minnesota.

Through his first 10 UFC appearances, Pierce remains equal parts unknown and under-appreciated. He’s earned seven wins in his three-plus years on the roster, starting with an upset win over veteran Brock Larson in his debut, yet he remains unidentifiable to some.

“It’s simply exposure; I haven’t has as much face time in front of the cameras as some guys,” Pierce suggested of his current placement outside of the spotlight and on the fringes of contention. “I think once I start getting a little more consistent with putting guys to sleep, submitting them, getting TKOs, and just having more exciting fights that aren’t 15-minute grinds, that’s what is going to transpire. That’s what I’m really working on, and that’s what I’m looking forward to doing here from now on.”

Last time out, Pierce took a positive step towards more recognition with a knockout win over Simpson, connecting with a short left hook early in the second round to earn the finish. Collecting the stoppage was satisfying, but don’t expect it to change Pierce’s style when he steps in against Baczynski in Australia. Instead, he’ll stick to what has worked thus far, and see where the fight takes him.

“It was huge for me; I’ve only had a few knockouts in my career, and Aaron Simpson is no slouch. He’s a two-time All-American from Arizona State, fought at 185 beforehand and did very well there. He’s a really athletic, strong guy who is a veteran of the sport and knows what he’s doing, and to come back from kind of getting wobbled in the first and surviving that, readjusting, and getting the KO was huge. I was thrilled to get that, and I’m just looking forward to continue doing that.

“At the end of the day, you want to win; that’s how you get paid, and that’s how you stay in the UFC, and how you keep working towards the top,” Pierce continued. “But at the same time, you also want to make it exciting, to get finishes, to get on the main card, and win those bonuses.

“Sometimes you get in there and it turns into a grind, and that’s not how you planned it, but it turns into that, and then there are other times where maybe you were preparing for a grind (and it doesn’t turn out that way). I was preparing for a 15-minute battle of a wrestling match with Aaron Simpson, but we both like to throw hard too, and it just happened that I got the connecting punch there in the second round.”

Pierce will aim to continue delivering exciting performances when he steps in opposite Baczynski as the UFC makes their maiden voyage to Gold Coast, Australia.

After dropping a unanimous decision to Brad Tavares on the Ultimate Fighter 11 Finale, Baczynski was dropped from the UFC roster, and so far, it appears to have been a blessing. He dropped to welterweight and scored consecutive victories over veteran Tim McKenzie and promising prospect Alex Garcia before getting the call to fill-in opposite Clay Harvison last September in New Orleans.

The 30-year-old Baczysnki stopped “Heavy Metal” in the second round, and hasn’t slowed down since. Three more wins – including two stoppages – have the “Polish Pistola” riding a six-fight winning streak into this meeting with Pierce, but the blue-collared former wrestler from Portland State University fully intends to end his run when the two square off.

“He’s had some good wins here recently, and a good run,” said Pierce of his opponent, “but I think I’m going to put a stop to that real quick on the 15th in Australia. I think it’s safe to say that I’ve fought the tougher competition so far in the UFC. The only guys that I’ve lost to in the UFC have all had title shots, with the exception of one, and that’s Johny Hendricks, and he’s certainly in the mix of getting a shot here soon too.”

For Pierce, the opportunity to return the cage quickly is a welcome departure from the lengthy layoffs he’s endured since joining the UFC roster. After needing just 22 months to post an 8-2 record in his opening 10 fights, it’s taken another three years and change for Pierce to put together a 7-3 mark in his 10 fights under the UFC banner. So when the call came to replace Noke, Pierce jumped at the opportunity.

“Fighting more frequently would definitely be fun, and it gives you something to train for,” admitted Pierce. “When you have long layoffs, you’re training, and you’re working on things that you need to work on, but it’s always nice to have a goal and an end date; something that you’re preparing for.

“Usually my layoff between fights is a little bit longer – or it has been in the past – so to get the call back so quickly kind of gave me a big smile. I was eager to get back to the training room and get back to work. A lot of times I’ll take that longer layoff between fights, and it’s kind of a process getting back into the rhythm and routine, but this time it wasn’t so bad.”

In addition to being able to get back into the cage quickly, Pierce sees his bout with Baczynski as an opportunity to close out the year with a third consecutive victory and position himself to make some headway in the welterweight division in 2013.

While the two represent the tallest and shortest fighters competing in the 170-pound weight class, Pierce doesn’t see the size difference being a factor.

“He’s a tall guy but, I’ve dealt with things like that before, and I’m not really too concerned with it. I’m going to get in close. He’s going to be too close to me to throw his power if I’m inside, so I’m all right with it.”

He doesn’t plan on this fight being a grind either.