"I’m ready for any of the tricks he has for me, and I’m looking for another big finish." - Mike Pierce 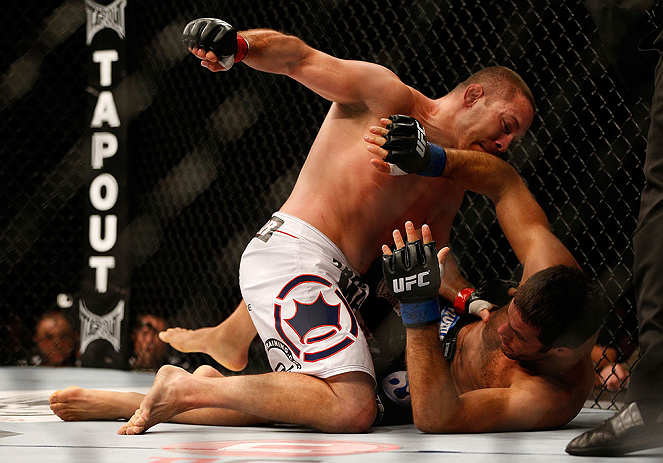 “We’re kind of caught walking this fine line between having it look like a semi-bar fight where we’re throwing leather wildly or making it a little more technical.”

Mike Pierce is laughing before he’s done with the sentence, but that doesn’t make the sentiment any less true, especially for someone in his position.

The hard-nosed wrestler from Portland, Oregon has spent the last four years building a reputation as a tough out in the UFC welterweight division, amassing a 9-3 record inside the Octagon, including having won his last four outings. Because he’s a former Division I wrestler that employs a “grind you down” approach in the cage, Pierce has also been labeled “boring” by some, and a “decision fighter” by others, even though his wins on the biggest stage in the sport are split 5-4 between decisions and finishes.

Despite the reputation that precedes him, Pierce has actually finished two of his last three opponents, most recently earning a second-round technical knockout win over David Mitchell at UFC 162 in July.

With four straight wins and fresh off what many considered a much-needed stoppage, the 33-year-old veteran anticipated a step up in competition and a move up the fight card the next time the UFC called with a fight offer.

“My last few fights, I’ve been able to find those finishes and put guys away, and it was like, `Okay, this next one should be a good one,’ and then it’s in Brazil, not on the main card, guy on a losing streak. I was like, `What do I have to do here?’”

Wednesday night in Barueri, Brazil, Pierce will share the cage with Rousimar Palhares. While the hulking Brazilian known as “Toquinho” is an established name, he’s also returning off a nine-month suspension and making his debut in the 170-pound weight class.

“It doesn’t make a lot of sense in a lot of respects, but in some it does,” Pierce says of the matchup with the submission specialist. “I think him moving down to welterweight is a last ditch effort to stay with the company. He hasn’t had a lot of success in recent times at 185 – he’s a shorter guy with not a lot of reach for those bigger guys at 185, and he lost his last two via TKO.

“I wasn’t originally on the main card, but then somebody got hurt and they bumped us up, which is a great opportunity. I get a chance to showcase what I’ve been doing in my last several fights, and hopefully get a KO or a TKO or some sort of dramatic finish that will elevate me to those main card fights a little more often than they have in the past.

“Palhares is a tough guy, he’s got a decent name, he’s a relevant fighter, and I’m going to go in there, do what I’ve been doing my last few fights, put this guy away, and move on to the next one.”

Pierce’s run of success and the slow ascension up the welterweight rankings that has accompanied it have drawn comparisons to former title challenger and perennial contender Jon Fitch, one of the three fighters to have beaten the Sports Lab Fight Team member inside the Octagon.

It took Fitch eight victories to earn the chance to challenge Georges St-Pierre for the welterweight title. Halfway there, the former Portland State University wrestler acknowledges there are parallels between he and the former perennial contender, but also makes sure to point of the differences between them as well.

“I really don’t like comparing myself to Jon Fitch because he kind of has this weird stigma about him,” he says with a chuckle. “He’s a great guy, he was a tough fighter, but I like to think I have a more active striking game, or at least I’ve put more guys away with my hands. I don’t want to be mixed in with him where it just turns into a grindfest – I’ve had fights like that, but not all of them end up that way. There is method to my madness and that’s looking to finish guys; I’m not just laying on guys, looking to win by points.

“I see that we’re in a somewhat similar situation where I’m put in a position that I have to keep doing what I’m doing, putting guys away, and eventually I can’t be ignored.”

But it’s not that simple and straightforward, and Pierce knows that all too well.

“We’re kind of caught in this Catch-22,” he says of himself and others that employ the “wear you out” approach inside the cage. “We want to make it exciting – we always want the finish; there’s not one of who goes into a fight and says, `Man, I can’t wait to see what the judges say after this fight!’ We want to finish fights, we want to put guys away – it feels good, it’s exciting for everybody, but they don’t always happen.

“So sometimes you’re kind of like `Do I want to go out here and get an all-out war going, get some excitement going? Toss out some of the technique and strategy? Or do I want to play it a little more methodical and strategic, and get this win because I know he’s a tough guy that doesn’t make a lot of mistakes?’

“What I like to do and what has worked for me for a long time is wearing guys out and getting them to make mistakes. When you’re tired, you’re going to make more mistakes – your hands are going to drop, and that opens up those opportunities to land those shots, put guys to sleep. That’s something I’ve worked very hard on, especially in recent times – grinding on them a little, but finding those holes and opportunities to open up, whether it’s landing with my hands or knees or kicks or whatever. I’ve had a couple nice finishes in my last three fights – I’ve definitely been working on that, and it’s starting to pay off a little bit.”

And he’s keyed up to keep that going when he shares the cage with the returning Palhares on Wednesday night.

“For me, this a good opportunity to go to his home country of Brazil, put it on him, and make a statement, like I have in my last several fights, and move forward. He’s a tough and dangerous opponent – he’s finished lots of guys with leg locks; that’s kind of his thing, and I think really that’s the only area where he has any kind of chance of beating me, but I’m obviously prepared for that.

“I know what it’s like to get down to 170, unlike him, so I think it’s going to be new and different for him, and probably a lot harder than he’s used to. But this is just another fight for me – I’ve been there, I’ve done that.

“I’m ready for any of the tricks he has for me, and I’m looking for another big finish.”