Mike Perry Thinks His Job Is On The Line

On the eve of UFC 245, “Platinum” Mike Perry sounds a little more like a Jedi Knight than a welterweight standout set to square up with emerging contender Geoff Neal this weekend at T-Mobile Arena.

“I’m feeling like my job is on the line — and it is — and I have to fight my ass off and find that balance,” said the 28-year-old fan favorite, who arrives in Las Vegas having earned a Fight of the Night bonus in each of his last two appearances — a unanimous decision win over Alex Oliveira in April and a split decision loss to Vicente Luque in August. “I’ve been looking for that balance this whole time, through training and everything else.”

Just as the final three installments of The Skywalker Saga have been about Rey and Kylo Ren trying to figure out where they fit between the darkness and the light within The Force, the whole of Perry’s UFC career has been a journey of self-discovery and a search for balance.

He arrived as an undefeated knockout artist — a brash, flamboyant figure who quickly dispatched his first two opponents in devastating fashion while establishing himself as a must-see attraction in the loaded 170-pound weight class. Over the years, he’s refined his skills and rounded out his game, seeking out ways to maximize his natural talents and blend in fundamentals that can help carry him to greater heights in one of the most competitive divisions in the sport. 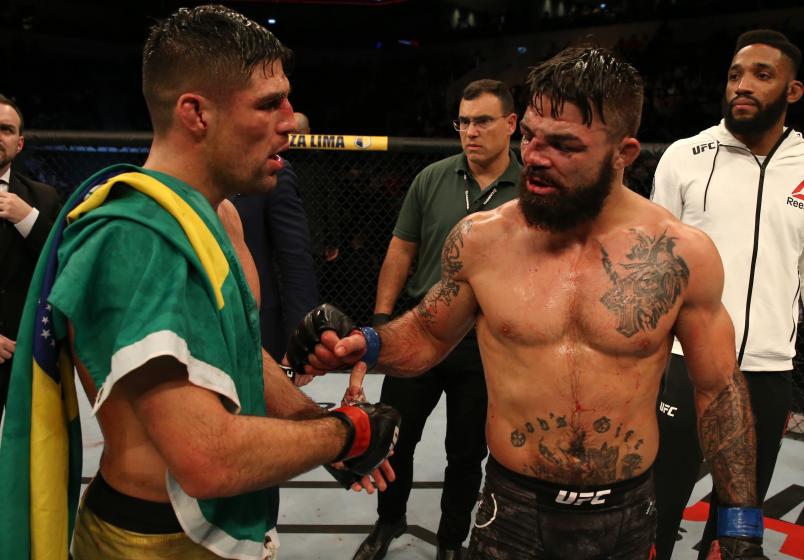 While he’s consistently delivered entertaining performances, the results themselves haven’t always been there, as Perry enters Saturday’s final preliminary card bout with a 6-5 record in the UFC and just two victories in his last six starts.

“To me, the only fight that I’ve lost is to Cowboy,” he said of his November 2018 submission loss to Donald Cerrone. “(In all the other ones), I get through the 15 minutes and I give guys hell, but I’ve been disappointed and think back on that armbar and think that it wasn’t me and I was in a confusing place in life that didn’t let me focus on the task at hand.

“Technically, to me, I only have that one real loss; the other ones were just really good fights against top tier competition,” added Perry, who has shared the cage with established talents like Jake Ellenberger, Santiago Ponzinibbio, and Paul Felder during his time on the UFC roster. “I’m grateful that the fans look forward to me fighting.

“They don’t care how I fight at this point — they want to see me succeed and do well and I owe it to myself, my training partners, and the fans that have supported me since Day One (to pursue those victories). Yes I need to bring the fight, but I also need to get the results that we’re looking for, so no matter how I do that, the fans will get behind me.”

That’s the issue at the core of his struggle for balance.

In the three years and change that Perry has competed inside the Octagon, few have built the kind of “can’t-miss” reputation he owns in less time and with less top-end success. Hellacious finishes sandwiched around an entertaining loss to veteran Alan Jouban over his first five fights made the one of a kind fighter from Orlando appointment viewing and that desire to tune in has carried over into the second half of his UFC career.

Unfortunately for Perry, the results haven’t been there and while there is a sense of pride in going toe-to-toe for 15 minutes with a streaking finisher like Luque in South America, a Fight of the Night bonus and the admiration of fans, fellow fighters and media members for such a gritty performance doesn’t carry as much weight as coming away with a win.

Saturday’s bout is one that the Fortis MMA product sought out following his victory over Niko Price in July and Perry’s clash with Luque a month later. A graduate of the Contender Series, the 29-year-old Neal has earned victories in each of his first four UFC appearances, earning three finishes while extending his overall winning streak to six.

While many look at this fight as Neal calling out an established name because he knows he needs a signature victory over someone with a little more clout to really propel himself up the rankings, it’s Perry who enters this weekend’s final preliminary card fight positioned outside of the Top 15.

“I guess we’re both thinking that, ain’t we?” he asked rhetorically when presented with the idea that Neal chased the fight knowing he needed a big name win to hasten his ascent in the ultra-competitive welterweight division. “To be honest, Geoff has done something that I haven’t been able to accomplish in the UFC, which is a four-fight win streak.

Perry himself has never gotten to three straight wins, yet alone four, but some of that can be tied to the quality of competition he’s faced during his first 11 fights.

After earning back-to-back wins over Ellenberger and Alex Reyes to begin 2017, he closed out the year with an assignment against streaking Argentine Santiago Ponzinibbio, losing a unanimous decision in a typically entertaining, hard-fought affair.

After edging out Paul Felder at UFC 226 to get back into the win column, he jumped into the cage with Cerrone and lost by submission, then followed up his victory over Oliveira in April by taking the fight few in the division were eager to accept against Luque.

There have been no “gimmes” for Perry over the last couple years as he’s worked to find that balance between being an ultra-aggressive juggernaut and a more refined, more composed mixed martial artist and while Saturday’s showdown with Neal is no different, he’s hopeful that it will be the start of something special.

“I have to show him in the fight that no matter what he does — if he lands a shot, keep coming at him; keep putting that pressure on him,” he said. “I think I have to go back a little bit to how I came into the UFC before the Jouban fight and really put pressure on guys and not care if a guy is hitting me because I don’t care about getting hit.

“I don’t feel it and if you hit me, it’s so that I can hit you and my hit is going to be better. It’s who hits last, not who hits first.

“The path is what really matters,” added Perry, who clearly takes a bigger picture perspective on his career, even when preparing for a specific assignment. “I leave good fights behind me and I take it all as it comes. I’m going H.A.M.”

And then, win or lose, he’ll continue is Jedi-like journey in search of balance.