Mike Perry Is Hungry For Saturday

Mike Perry is laser focused ahead of his matchup with Mickey gall at Saturday’s Fight Night
By E. Spencer Kyte, on Twitter @SpencerKyte • Jun. 24, 2020

Mike Perry has a Dr. Jekyll and Mr. Hyde thing going on ahead of his return to the Octagon against Mickey Gall in Saturday night’s UFC Fight Night co-main event.

Ask him about certain subjects — his preparations for this weekend’s fight, his current life outside the cage, what a victory this weekend would mean for him — and you encounter the personable, engaging Dr. Henry Jekyll. Venture too far into territory he doesn’t care to explore and the angered Mr. Hyde appears on the scene, quick to clap back and ask what you would do if he were squaring up to punch you in the face right now, in real life?

“What if we were face-to-face and I was about to punch you in the face. What would you do?” asks Perry.

The UFC welterweight’s question comes at the end of an exchange that began with me incorrectly suggesting he’s commented on the level of competition Gall has faced to date, which he has not done, and quickly pivoted into a “none of you reporters know what you’re talking about and I’ll fight all y’all, too” rant.

When I demurred and said I hope we’d never have to square up because that would go terribly for me, Perry is as quick with the counterstrike above as he can be with his hands inside the cage.

I say I would do as he suggested — stand there and take the shot, which would probably render me unconscious, at which point, someone watching the unexpected encounter between a dangerous knockout artist and a forty-something writer from Canada would likely step in, acknowledge that I probably deserved it, and wave off the fight.

“They’re gonna get hit, too,” Perry says, chasing his words with a laugh, happy to have expelled his Mr. Hyde energy and eager to return to being Dr. Jekyll.

The truth is that this inner struggle between Jekyll and Hyde is nothing new for the 28-year-old Floridian.

Throughout his UFC career, Perry has been searching for a way to make his natural, aggressive instincts and obvious raw talents mesh with the structure and systems that most professional fighters operate within.

He’s tried to dial back the “guns blazing” offensive approach that yielded nine straight stoppage wins to begin his career and 11 finishes in his first dozen fights, including each of his first four UFC victories.

He switched coaches and camps a couple of times, sporadically suggesting he would coach himself and bounce around to different gyms when he wanted to go live with someone. He’s also expressed frustration with the relationship between coach and fighter, questioning why he would take direction on how to contend with his next opponent from someone who isn’t going to be in the battle, dealing with whatever transpires on fight night.

Perry addressed those persistent issues ahead of this weekend’s clash with Gall by opting to run his own camp. He brought in a couple different bodies to help him prepare, but for the most part, it has been a one-man show, with Perry calling the shots, and his girlfriend Latory Gonzalez holding pads for him from time-to-time.

Saturday night, she’ll be the only one in his corner.

“I’m not going to worry about my corner; they’re going to be safe,” he says, addressing his decision to eschew coaches in favor of having his lady join him Octagonside this weekend. “The UFC handles a lot of this — they help us with nutrition, they’re here to help us with the weight cut, they set us up in these rooms and I’m grateful. 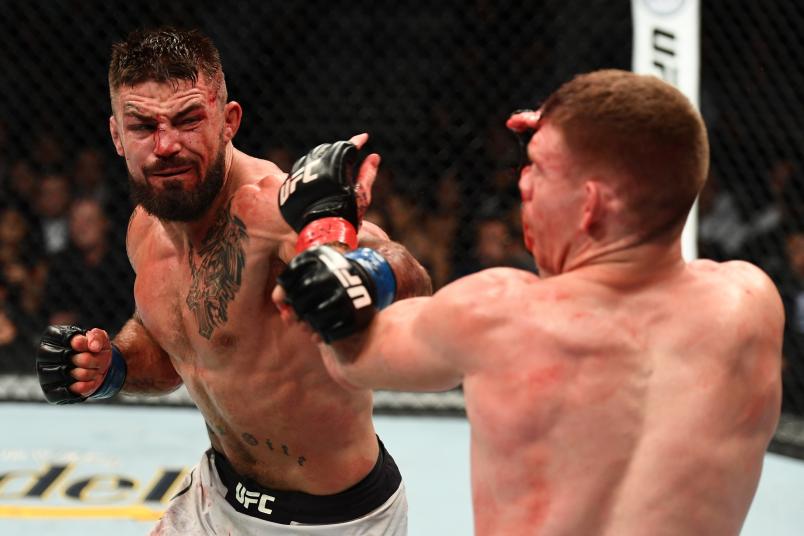 “We’re just chillin’ and waiting to go to the show, so I’m not going to be worried about nothin’ — I’m just gonna go in there and focus on reacting and fighting and winning, beating this guy up; punching him in the face as many times as I can.”

As he discusses his preparations and readiness to get back to work this weekend, it’s Dr. Jekyll speaking, conveying his excitement in soft, measured tones; his anticipation evident in his voice.

“It’s an easy life — it really is — and I don’t have to overthink it, just keep it simple,” he adds. “It don’t matter if I’m on my back, if I’ve got him on his back — in any position, I’m stronger, faster, better, more experienced, crazier, dumber, smarter, all-around genius over here with this fighting s***.”

But just when it seems like Dr. Jekyll has grabbed control and is going to remain at the fore, Perry himself acknowledges that he’s feeling both his best and his worst at this moment, which ultimately leads to Mr. Hyde making another appearance.

“This is the best I’ve felt and the worst I’ve felt; the highs are high and the lows are low,” he says. “I’m 28 and I’m living my best life, like I always have. I always say, ‘How’s it gonna get any better than this?’ and it always gets way f***** better.

“But I let people get under my skin because life is so f****** great and they want to hate,” he continues, his delivery quickening, his tone beginning to shift. “So I want to beat their *** for hating and then I’ll be happier again.

“If I’m happy and excited, people try to take you down, and when you get mad at them, they’re like, ‘See - you’re not happy!’” he continues, clearly aggravated by the social media trolls and commenters who seem to exist solely to egg him and turn Jekyll into Hyde. “But then I punch them in the face and they’re sleeping in Dreamland and I’m happy again.”

Ahead of his last fight at UFC 245 in December, Perry admitted that he felt like his job was on the line as he entered his bout with Geoff Neal having earned just two victories in his previous six bouts. While he was quick and correct to point out the strength of schedule he’s fought throughout his UFC tenure, the contemplative and combustible welterweight believed he needed a victory.

That didn’t happen. Instead, Neal became the first man to stop Perry with strikes, stunning him with a head kick and putting him away with punches just 90 seconds into their preliminary card clash.

This week, Perry is focused exclusively on the present.

It’s a statement that is both Jekyll and Hyde — equal parts thoughtful and passionate, focused and ferocious.

After several years, Mike Perry just might have found the balance he’s been searching for this whole time.