Mike Massenzio - Living For The Challenge

“I just put it in my head that it’s gonna be the best Palhares. He’s
training hard and he wants to come out and win in dominating fashion,
and I expect the best Rousimar that there is.” - Mike Massenzio 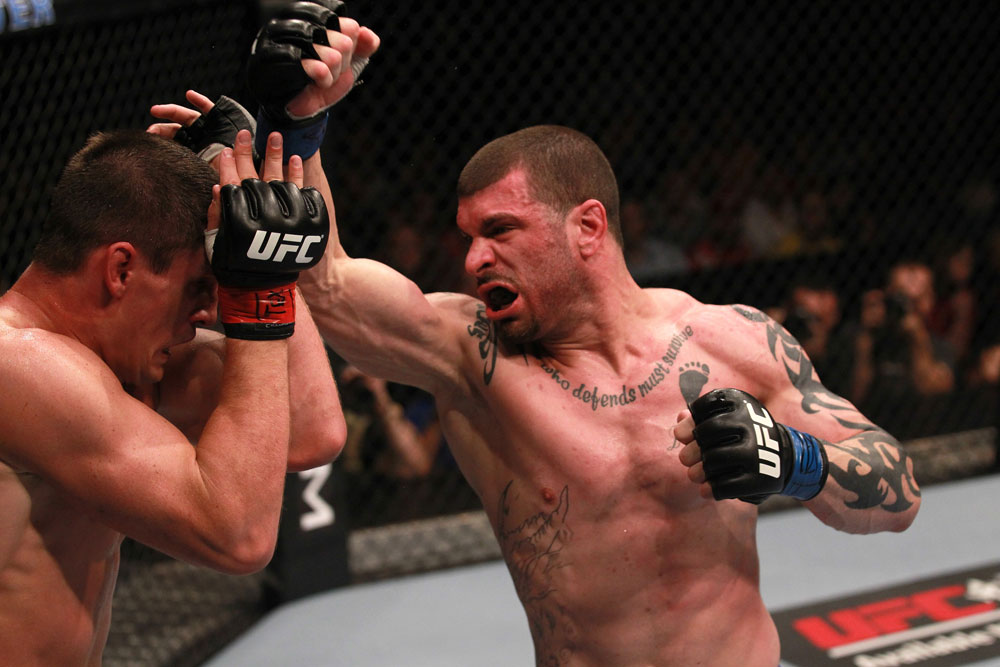 Middleweight contender Rousimar Palhares has taken plenty of flak for some bizarre behavior that has ranged from holding on to submissions for too long to jumping to the top of the Octagon and celebrating a victory before the fight was even stopped. But if he thinks Mike Massenzio isn’t willing to go wherever necessary to win their UFC 142 bout this Saturday, he’s sadly mistaken.

“If it has to be a war, let’s do it,” said Massenzio, who earned himself a spot on the main card not with the skill that made him a Brazilian Jiu-Jitsu black belt and national junior college wrestling champion, but with the grit and determination he showed in bouts against Brian Stann, Krzysztof Soszynski, and, most recently, Steve Cantwell. In other words, he can beat you with technique, or he can beat you with relentless pressure and heart. Pick your poison.

“I definitely had to dig down deep in the last fight,” said the New Jersey native, who pounded out a three round win over Cantwell at UFC 136 last October. “Cantwell’s really technically sound, and it took one minute to really pull everything together. I aborted the first game plan, and I noticed very briefly that he didn’t like going backward, and that’s what I was capitalizing on more than anything and that’s when everything started connecting. No matter where it is, whether it’s on the ground or on the feet, I believe in myself that I can handle myself there.”

It was Massenzio’s boxing, not his wrestling or jiu-jitsu, that paved the way for his first UFC win since 2008. It was a much needed victory for the 29-year old, and one in which he showed just how dangerous he can be wherever the fight goes.

“I’ve been boxing since I was a little kid, but I never really let my hands fly,” he said. “Going into that fight, I knew it was gonna be another tough one, and I just told myself that no matter where the fight goes, just let it go. And honestly, it just happened. It came off crisp and I felt real comfortable and I was really happy with myself.”

The next test is Palhares, winner of six of his eight UFC bouts, and the premier leg lock master in the sport today. Unfortunately, the Rio de Janeiro resident has gotten more attention lately for his aforementioned antics than for his performances, which is unfortunate, but that unpredictability can also make an opponent tentative, wondering what’s going to happen next. Massenzio’s doing his best not to fall into that trap.

“The biggest thing is that I just stick to my gameplan, stick to the way I fight, and try not to fall into what he’s doing and his tendencies,” he said. “Obviously we picked him apart a lot and did a lot of tapework, especially in the beginning, and just tried to pick the things he’s consistent with. Pretty much everyone knows he’s a big leglock guy, but overall I’m just training in every area and not just worrying about one thing. I’m solely focusing on fighting my fight, and not falling into this mode where I’m completely fighting his way and worrying about him.”

And who knows, with Palhares seeing a sports psychologist and doing his best not to repeat the errors of the past, he might be the one who is tentative on fight night. But again, Massenzio isn’t basing his odds of winning on Palhares being a pacifist when the bell rings. He’s expecting the “Toquinho” who has sent the likes of Dan Miller, Ivan Salaverry, Jeremy Horn, and Tomasz Drwal down to defeat.

“He’s a world-class athlete and one of the best of the best and I don’t really think about what he’s gonna do,” said Massenzio. “I just put it in my head that it’s gonna be the best Palhares. He’s training hard and he wants to come out and win in dominating fashion, and I expect the best Rousimar that there is.”

If anything, Massenzio probably has the edge standing, and Palhares has had some struggles with wrestlers like the two Dans on his ledger, Miller and Henderson.

“If you think about the Dan Miller fight,” said Massenzio, “he really didn’t do any leglocks – one attempt. So the key is to stay smart wherever the fight goes and the big thing is trying to avoid getting taken down and trying to avoid clinch areas where he’s gonna look to then start attacking. Just have good hands and keep it active with a lot of movement.”

He almost makes it sound easy. But it’s not, and he knows it. In fact, if you know Mike Massenzio, you’re aware that if something is easy, he doesn’t want anything to do with it. So put him in with one of the best submission artists in the game, and put the fight smack dab in the middle of his hometown. That’s the kind of fight he wants.

“To me, this is what I like,” said Massenzio. “I want the challenge. This is gonna be the hardest test of my life, going to his hometown, his home country, with over 20,000 people against me, but that’s what I live for. In wrestling, I’ve been there. I’ve been the underdog my whole life, I pulled it out before, and the main thing I always told myself is to never quit, never give up, never stop coming, and just keep it going and keep pushing forward.”