Mike Jackson Is A Dangerous Man

37-Year-Old Welterweight Set To Enter His Third Decade In The Fight Game vs Dean Barry This Saturday
By Thomas Gerbasi, on Twitter: @TGerbasi • Apr. 21, 2022

“You would not turn down that fight,” said Mike Jackson, completely addressing in seven words the negativity that he has often received for fighting both of his professional MMA bouts in the UFC.

And he is one hundred percent right. So as he approaches his third pro MMA matchup against Dean Barry this Saturday in Las Vegas – and yes, it’s in the UFC – he’s more interested in his performance and getting his first official victory than listening to critics. And there is a particular milestone that goes along with this fight, as well.

“After this fight, I will have fought in three different decades,” Jackson said. “That's wild. The fighting came first, and then the media personality came. And now I've got this new crop of kids - these are some killers. The group right under Adrian Yanez, I was at his very first fight and now he's in the UFC. I've got guys right under him calling me OG, and I'm like, I've been doing this way too long. (Laughs) I love it though.” 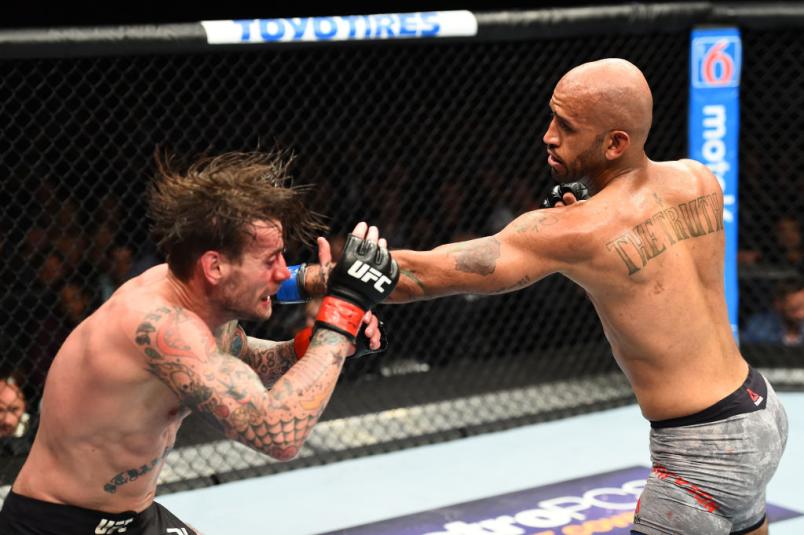 That makes the 37-year-old a dangerous man, because when he fights, it’s not because he has to, but because he wants to. That distinction is a key one for the Houston native.

“For me, personally, I never had to fight,” Jackson said. “My dad is retired from the HPD, but he was like the avenger of the Houston Police, the top guy. My mother was a nurse, she remarried and my stepdad at the time, he was a doctor. So I come from a different kind of privilege, and it's a privilege that makes me think, 'Why are you fighting? Why would you do that?'”

He laughs, not really sure of the answer, but whether it’s been amateur or pro MMA, pro kickboxing or pro boxing, he’s had the bug in his system, and it’s not leaving anytime soon, even if there are those who take it personally that he made his pro MMA debut in the UFC against Mickey Gall in 2016 and followed that up with a 2018 bout against CM Punk.

“People are so emotional, and they'll feel they're right until they're proven wrong,” Jackson said. “And sometimes even then, they don't want to concede. You have to find your place - this was just the right place at the right time for me. It may not be for you. We're all on different paths here. What I do doesn't impact another person.”

You would think otherwise based on some of the barbs “The Truth” has received over the years. But the photographer, videographer and respected chronicler of the Texas MMA scene isn’t overly concerned with what other people think. He’s doing his own thing.

“I'm enjoying the ride,” he said. “Things always fall into place, especially when I least expect it. This is no different. I'm grateful. I know I have something other people want and it makes me smile.”

Next up is Ireland’s Barry.

“With Dean Barry, he has no real grasp of the dangers that I bring to him,” Jackson said of his foe. “All these people see the Gall fight, they see the Punk fight, and they're like, 'This guy can't fight.' But everybody's objective is to be the best and to be world champion; I'm just here to knock motherf**kers out. I'm here to have fun and carve out this place in life. You've got these guys who are like, ‘I want to be the best,’ and then they get there, and there's the reality. Now what do I do? This sport is so crazy, and you have these guys who want to compete in it, but they don't understand the reality. I possess the skill set that this kid is simply not ready for and he's gonna find out. Not only are there levels, but there's so many dangers, man.”

Oh yeah, let’s not forget that Jackson is a student of the game, and when he saw Anderson Silva’s UFC debut against Chris Leben in 2006, he found a way to express all his artistic leanings in the space of a 15-minute fight.

“I look at fighting from a chess standpoint,” he explains. “I'm not trying to maul someone. I want to beat them in a way that's impressive. I look at myself like an artist - whether it's the photography, the videography, the fighting, it's all art to me. And out of nowhere comes Anderson Silva doing ninja s**t. I remember seeing that, and I was like, that's out of a movie, and he's really doing it. Why wouldn't you want to try that?”

So he did, and here he is, all those years later, just trying to have fun doing what he loves. And that annoys some people.

“They say, ‘You don't deserve to be here,’” said Jackson. “Who the f**k are you to tell me what I do and don't deserve? You have no idea what I deserve.”

And among his peers, Jackson is respected as someone who has paid his dues and seized the moment when it was offered to him. That respect means a lot, and while “The Truth” may never wear a world championship belt, he’s going to make the best of his time in the spotlight.

“I just go,” he said. “Whatever happens happens, and I want to use my platform to help elevate fighters. I love this sport so much and I want to build up this platform through fighting that helps other guys out. I'm building a brand that's beneficial for all the people that are in my circle. The more success I have, the bigger eyes that are gonna come to these people. And I understand my position and my role. But make no mistake about it - I can actually fight.”