With His Father Battling A Terminal Illness, Mike Grundy Hopes To Put On His Best Performance Yet
By Thomas Gerbasi, on Twitter: @TGerbasi • Mar. 16, 2022

It’s always a good parental go-to when a kid is driving them crazy with something or other.

I don’t know if Dave Grundy ever said that when his son Mike was tearing up the wrestling mats and then doing the same thing in mixed martial arts, but whether he did or not, Mike did get one just like him in his 17-year-old son, Jack.
“Now I know how he feels because my son fights,” said Grundy, whose son is two fights into his amateur MMA career. In fact, Jack just fought last weekend, a week before dad enters the Octagon for the fourth time this weekend to face Makwan Amirkhani at London’s O2 Arena. It’s not easy, but Grundy is doing his best to keep his nerves under control.

“I do hold it together quite well,” he said. “I was nervous on his first one. He had his amateur debut a few months back but he did really well. It was just before Christmas and he won his amateur debut with a TKO in the first round. But yeah, I held it together pretty well. I can't get emotional over this one, but I'm confident in him. He's very talented and he's doing great. He's gonna go very far.”

Needless to say, it appears that young Mr. Grundy is going to follow his father into the fight business, and if anyone knows the good, bad and the ugly of that business, it’s the Wigan native, who has seen injuries and bad luck keep him to just three UFC bouts since his debut in 2019.

“You do worry about things like that, but he's said he wants to do it, he wants to commit his life to it, and he has done it,” Grundy said. “You just gotta support him and make it as good as you can for him rather than push him away from it, because if you push him away, he's gonna rebel and what's he gonna do then? But he has the love for the sport and he really wants to do it and I'll back him a hundred and ten percent.”

Sound familiar? It’s the same philosophy embraced by Dave Grundy, a father of five who introduced wrestling to his own children and backed them every step of the way as a coach. And now it’s Mike’s turn to do the same for his three boys. 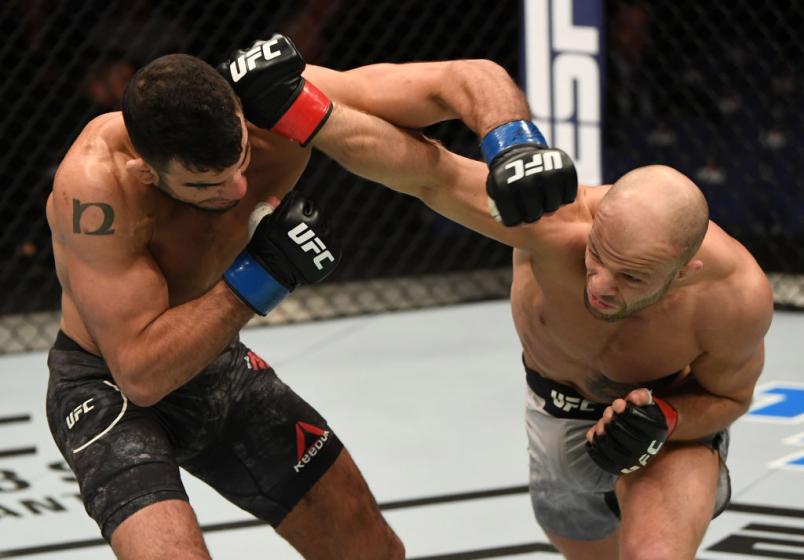 Mike Grundy of England punches Nad Narimani of England in their featherweight bout during the UFC Fight Night event at The O2 Arena on March 16, 2019 in London, England. (Photo by Jeff Bottari/Zuffa LLC)

“He coached me from a young age,” Grundy said of his dad. “So I wasn't surprised at all, really, (that his own sons took to wrestling). My son started rolling around and messing around on the mats from when he was born pretty much because he was watching me wrestle. So he started doing stuff when he was three and four years old, and it's always what he's done. I've got a newborn now, he just turned one year old and he's sat on the mat watching the wrestling right now. I've got three kids and I've got a five-year-old as well and he's wrestling, so the youngest one's watching him. It's just in our family. My dad did it, my sister actually just qualified for the Commonwealth Games, I've done it obviously, and all my other brothers and sisters have done it - it's just what we've always done.”

That doesn’t mean Dave doesn’t get the butterflies in his stomach when his kids and grandkids compete.

“He loves it, but he's very, very nervous, and you can see that he's nervous as well, but he keeps it together just about,” said Mike. “He's excited to watch Jack and excited to watch myself.”

Dave Grundy will be in the O2 Arena on Saturday to watch his son face Amirkhani. And while every fight is important at this level of the sport, this one has a lot more attached to it.

“I want to get out there and I want to make a statement, especially on this show,” said Mike. “Obviously, it's in London, it's the last fight on my first contract. I'm coming off a two-fight losing streak and I suppose I've gotta fight to keep my job a little bit, as well. But more so, this is gonna be a very special fight. My dad was diagnosed with a lung disease and it's terminal, and I don't know if this is gonna be the last time he's gonna see me fight, so I'm fighting for him, really. I'm fighting to make a statement and make a new memory for my family, and that's what it's about this time. It's not even about keeping my job, it's about fighting for him.”

Mike Grundy is one of the good guys of the sport, but if you needed any more reason to root for him, this is it. The family has launched a GoFundMe page to help scratch the items off dad’s bucket list, but you get the impression that seeing Mike get his hand raised would be number one.

“We don't know how far he's gone right now, but he is terminal, and right now we're trying to raise money for him to get his bucket list done - all the things he wants to do and things like that,” he said. “So we're concentrating on making new memories, and March 19th is gonna be a great memory for me and my family, for me to get on that mic and tell my dad what he means to me after the win.”

“Me and my family have done combat sports all our lives,” said Mike. “We all live the life - it's just what we do and what we've always done. It's not even about the money, really. Obviously I need money to live and to support my family, but it's not about the money; it's about creating something great and showing my kids that if you believe in yourself and really work hard and put your life into it, then you'll come out on top.”