Mike Grundy Only Wants To Beat The Best

Mike Grundy is only interested in beating the best to get to the top
By Zac Pacleb, on Twitter: @ZacPacleb • Jul. 22, 2020

As Mike Grundy warmed up for his UFC debut in his home country of England, he made a decision: He wasn’t going to wrestle too much and instead focus on boxing.

While that might seem like a valiant, all-action type of decision, it was more out of necessity. Grundy had a slight hamstring tear heading into that March 2019 bout with Nad Narimani and felt like he couldn’t utilize what is always Plan A in a fight. To that point, Grundy secured submissions in eight of his 11 victories and hadn’t earned a knockout win at all. So, in the biggest fight of his life, he switched things up and earned a second-round TKO to start off his UFC career.

“It worked out on the night,” Grundy said. “I got the TKO, but I didn’t get a chance to showcase my wrestling skills, really. This one, especially (Mosvar Evolev) being a wrestler, too, and a decent-level wrestler, you’re going to see my wrestling I’m sure, and I’m going to dominate the fight.”

Since the win, injuries and the coronavirus pandemic kept Grundy from making his encore performance, and he spent the better part of 16 months watching the talent-saturated featherweight division jostle for the inside track at climbing the ladder.

“It’s been very frustrating to sit on the sidelines and watch a lot of these featherweights make a statement when I just generally know I can be there and better than these guys and be working up these rankings quick, and just as quick as these other guys,” Grundy said.

While most gyms – like everything else in the world – shut down for months, Grundy was able to keep training at his gym in Wigan with his 15-year-old son, Jack. Grundy said his son has wrestled since he was five years old and is adept at mixed martial arts, as well, sharpening his boxing, grappling and Thai boxing skills alongside his father.

Quite the way to get some father-son bonding in during a pandemic.

“He’s outgrowing me,” Grundy said, laughing. “I was just training with him during lockdown, so we had a good working relationship. It was good time for me to pass on my knowledge to my son and make him a better fighter himself but, all in all, he was a great training partner for me.”

The 33-year-old might not want to pass on all his knowledge just yet, though, considering a handshake agreement the two made about six years ago.

“I’m bit worried about that now to be honest,” Grundy said. “When he was nine years old, we were just in a restaurant talking, and we got talking about my Commonwealth Games medal. I got a bronze in the Commonwealth Games, and he says to me and my dad, who was also my coach at the time, ‘I’m not getting a bronze. I’m getting a gold.’ So, we had a little bit of a banter back and forth, then we ended up shaking on a deal when he was nine years old that we would have a wrestling match when he was 18. I’m actually more nervous about that than I probably am about the fight at the weekend.”

Grundy has about three more years to prepare for that scrap. On July 25, he finally gets his second foray into the Octagon. He and Evloev were originally booked August 2019 in Shenzhen, but injury forced Grundy off the card.

To make things a little sweeter, Grundy isn’t on Fight Island on his own. Two of his teammates from Team Kaobon in Liverpool made the trip as well: UFC debutant Tom Aspinall and middleweight headliner Darren Till. The camaraderie of training for the same card and traveling together eased the strangeness of the whole situation. 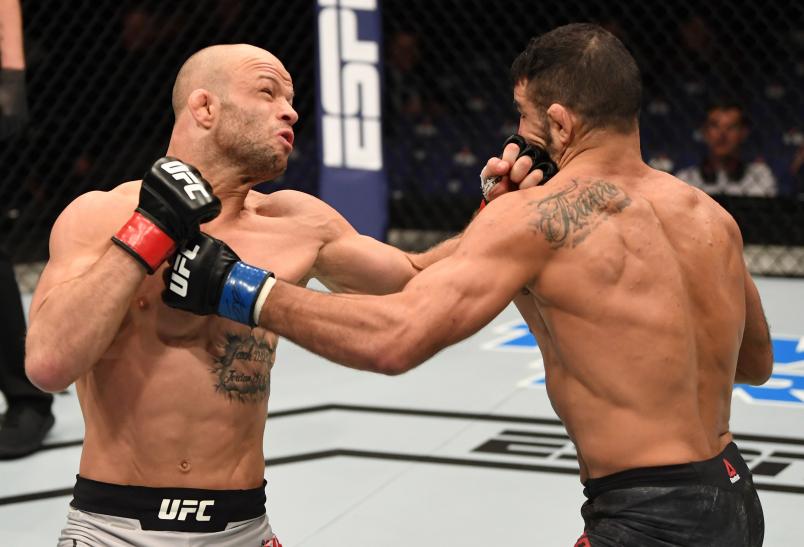 LONDON, ENGLAND - MARCH 16: (L-R) Mike Grundy of England and Nad Narimani of England trade punches in their featherweight bout during the UFC Fight Night event at The O2 Arena on March 16, 2019 in London, England. (Photo by Jeff Bottari/Zuffa LLC/Zuffa LLC via Getty Images)

LONDON, ENGLAND - MARCH 16: (L-R) Mike Grundy of England and Nad Narimani of England trade punches in their featherweight bout during the UFC Fight Night event at The O2 Arena on March 16, 2019 in London, England. (Photo by Jeff Bottari/Zuffa LLC/Zuffa LL

“Atmosphere has been great,” Grundy said. “Tom Aspinall is making his debut. Darren Till is main eventing, as always, so (training) camp has been class. Fight Island is great. It’s lived up to everything, really, and I think what (UFC President) Dana (White) has done for the sport is massive, really. I’m enjoying it. I’m not just sitting in my room. Been out to the jet skis, been out to the beach. Just relaxed, and we’re a team that just has a lot of banter. We’ll think about the fight probably Friday, Saturday, and that’s it. We’re good to go.”

When fight night (or more properly, fight morning for the athletes) arrives, Grundy expects more of the same results to which he is accustomed, and given the lost time, he isn’t planning on feeling shy about asking for his next opponent.

“It’s not something I’d usually do,” he said. “But I feel now that if you don’t ask, you don’t get. Like I said, just through having that time off, all the frustration has built up really and just made me a bit angry about certain things, and I just want to climb them ranks and beat the best guys now in the featherweight division.”

Training every day with the famously confident Till certainly helps cultivate that attitude, but Grundy joked he won’t be giving a Till-style Octagon interview any time soon while still making it clear what and who he wants next.

First, of course, Evloev is all that’s going to occupy his mind for the next few days. He won’t even need to consider abandoning his usual game plan, which is a scary and intriguing proposition for fellow featherweights and fans alike. Should everything go to plan, whatever comes out of Grundy’s mouth afterward might just attract as many eyes and ears as his fight.