Mike Easton: Not Ready to Go Yet

"I’m pushing my body to the limit because I really want that title shot. I want that belt, and I gotta get my revenge." - Mike Easton 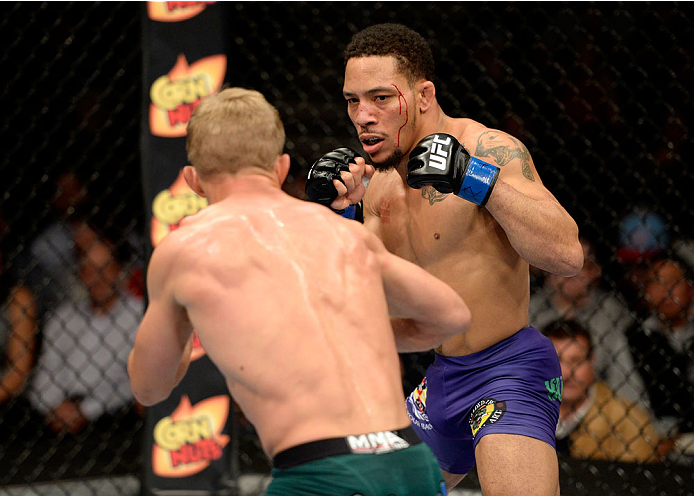 No fighter likes to get knocked out, especially in a highlight-reel manner broadcast around the globe. But in his particular case, Mike Easton is willing to accept getting finished by the legendary Bruce Lee in commercials for the upcoming EA Sports UFC video game.

“Oh man,” he beams. “I feel it was an honor getting knocked out by Bruce Lee.”

On Tuesday, the digital Easton can have a rematch with the digital “Dragon,” but on Saturday, it’s real life fighting, and “The Hulk” has business to tend to with Canada’s Yves Jabouin in a UFC 174 bout that sees Easton in dire need of snapping a three-fight losing skid. Well, dire to everyone except the Maryland bantamweight.

“I don’t feel like my back’s against the wall because I believe that the UFC likes me,” said Easton. “I think people say ‘Yeah, he may have lost, but he don’t get finished and he comes in to bring it every single time.’”

He’s right. He is a likeable young man, the only time he’s ever been finished in his 11-year career was in a non-UFC bout back in 2007 due to a broken arm, and he certainly brings it every time. And while you can look at those three losses as a giant warning flag, Easton sees them as something else.

“The losses were motivation for me,” he said. “I don’t know how other guys think, but I’m a fighter, man. The UFC needs me and I need the UFC – we need each other. The UFC changed my life and I’m thinking about big things in the future. All I can do is get better, and I want it so bad. All I have to do is keep fighting. But I have to finish these guys, and I’m tired of losing. I hate losing more than I like winning.”

And Easton really hates his most recent defeat, a hard-fought three rounder in January against the man who now rules the 135-pound weight class, TJ Dillashaw. So how did “The Hulk” enjoy Dillashaw’s UFC 173 win over Renan Barao for the belt.

“Man,” said Easton, “TJ looked good. What can I say? (Laughs) But I know I looked better against TJ than Barao did.”

It’s the moral victory that Easton won’t describe as such, but after a rough lead-up to the fight and after taking an accidental eye poke in the first round, he’ll try to take all the positives he can from the bout.

“A lot of personal things happened in my life for that camp too and a lot of people don’t know that about fighters, that we do have normal lives as well outside the gym and outside the cage,” he said. “But we do our best to make sure our outside issues don’t affect what happens in the cage. Fighting a guy like TJ Dillashaw, I got poked early, close to the end of the first round, and it was accidental, but I couldn’t see. And fighting a guy like him, you need everything proper, and no excuses, but it definitely played to his advantage.”

As for the biggest takeaway from the bout, Easton doesn’t hesitate.

“Damn, I am tough,” he said. “And I am somebody in the UFC’s 135-pound division. I’m a big threat, and all I can do is keep getting better. I can’t wait to fight Yves Jabouin. He’s a good fighter, he’s an experienced fighter, but to finish him inside of Canada, I know it puts me back up there in the rankings, and maybe I can call out Takeya Mizugaki or Renan Barao or Urijah Faber, so I can get myself back in title contention. I want to kill two birds with one stone: I want to get my revenge and get the belt. That would be something awesome.”

Still ranked eighth in the world, Easton can maintain his spot in the rankings, break his losing streak, and get back in the title hunt with a win on Saturday. That’s a lot to put on one 15-minute fight, but the 30-year-old from Camp Springs is up for it.

“I almost went through a little depression period after the loss (to Dillashaw),” he said. “My son is like ‘get over it, man.’ (Laughs) My own father said ‘get over it, you fought good, you fought hard; a loss isn’t a real loss if you learn from it.’ And I learned a whole lot from it. TJ showed me a lot and I just gotta open a little bit more.”

It’s a great storyline. Dillashaw teaches Easton the most valuable lessons of his career, and then Easton uses those lessons to beat Dillashaw. Well, that’s the plan at least.

“I’m pushing my body to the limit because I really want that title shot,” he said. “I want that belt, and I gotta get my revenge. It’s nothing personal; it’s business. And like TJ said, all you gotta do is believe. I believe, and we’re definitely going to have to scrap again. So I have to finish these guys and let the UFC know that I’m one of the guys that can hang in there with TJ and beat him.”