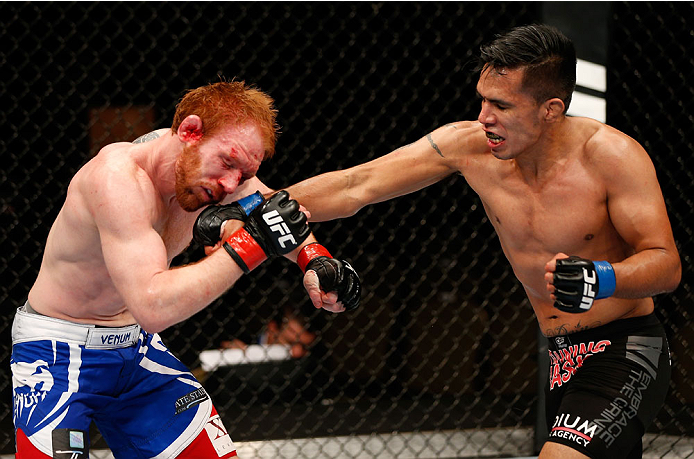 Mike De La Torre, like any American fighting a Brazilian in Brazil, is aware that he’s probably going to be booed when he walks to the Octagon to fight Tiago Trator this Sunday night in Porto Alegre. That’s fine, says the featherweight from Glendale, Arizona. He’s been through worse.

More specifically, when “El Cucuy” began his MMA career in 2006, he did so south of the border in Mexico, where things were, let’s say, less than UFC-like.

“You have to start somewhere,” he laughs. “I started fighting down in Mexico, and that environment…”

He pauses, as if setting the scene, and what a scene it was.

“I used to fight in nightclubs down there and it was all right,” De La Torre recalls. “But one fight was in a cockfighting arena, and when you walked in, it was crazy. It was all dirt, there was blood all over the floor, and in the backroom the cages for the roosters were there. There was blood all over the walls, and I’m trying to warm up and I feel uncomfortable, but you have to just stay focused and get the job done.”

Add in the security guards walking around with AK-47s, and it’s that kind of atmosphere that will either make you or break you.

“It was a crazy environment, but you have to hope for the best.”

De La Torre won his fight that night, one of 12 he’s compiled over the last nine years. He has yet to have his hand raised in the Octagon, but he hopes to rectify that this weekend against Trator, and if he has to be underdog, so be it.

“I’ve always been the underdog in every fight,” he said. “No one gives me the credit. Everybody considers me as not the good guy, but the tough guy that’s going to give them trouble. But that’s nothing new to me. I also fought most of my fights in someone else’s backyard, so I’m comfortable and I feel ready for this fight. It’s just another fight and I’m always better when I’m pressured or in a bad situation.”

There wasn’t more pressure on De La Torre than when he got a call from the UFC to face Mark Bocek on less than a week’s notice in Quebec City last April. The MMA Lab team member had a three-fight winning streak at the time, but he wasn’t exactly in the ballpark of making 155 pounds either. That didn’t matter, not after all it took to get that phone call.

“People don’t realize how much work I really put in,” he said. “It took me almost ten years just to get to the UFC. And I had a hard time getting there. It was like an emotional rollercoaster ride, but you’ve got to stick with it. You see a lot of guys come in and they say ‘oh, I want to be in the UFC,’ but they’ll train a year or two years, and when they don’t make it, they give up. My mentality was to keep pushing forward, it will come. And then I got that call, it was six days’ notice. I had to drop like 35 pounds within four days and it wasn’t easy, but I knew what I wanted and I couldn’t give that up for anything.”

De La Torre made weight for the fight and arguably beat the longtime UFC veteran. The judges didn’t agree, awarding Bocek a split decision win. The next fight didn’t go his way either, as he was submitted by Brian Ortega, but when Ortega tested positive for drostanolone, the result at least ended up as a no contest on De La Torre’s record. Not that it’s any consolation for the 28-year-old, who got right back into the gym.

“After that loss with Ortega I went right back into the gym and started putting in work and doing everything,” he said. “The way I stay positive is that I knew I beat Bocek. We sat next to him on the bus and I saw his face and I thought I got robbed with that fight. Ortega, he beat me, but he got popped, so that’s kind of like, whatever. But I normally stay positive. I’ve got a good team behind me, helping me out, keeping me focused and working harder. I feel like I’m in the best shape that I’ve been in for a while, the weight is coming off easier this time, so I think everything’s falling into place slowly. This is going to be a good year for me, and I think Tiago’s a good test. He matches up with me perfectly stylewise, so I’m excited for this fight.”

And after everything he’s seen and been through, that’s a great feeling to have.

“I got the controversial fights out of the way, so it’s going to start off as a solid year,” he laughs. “I’ll start off strong with a win and, depending how this fight goes, I want to fight right away. Everything’s falling into place, so I’m just going to ride the train and hopefully we can pick up momentum with a win and everything should be good.”