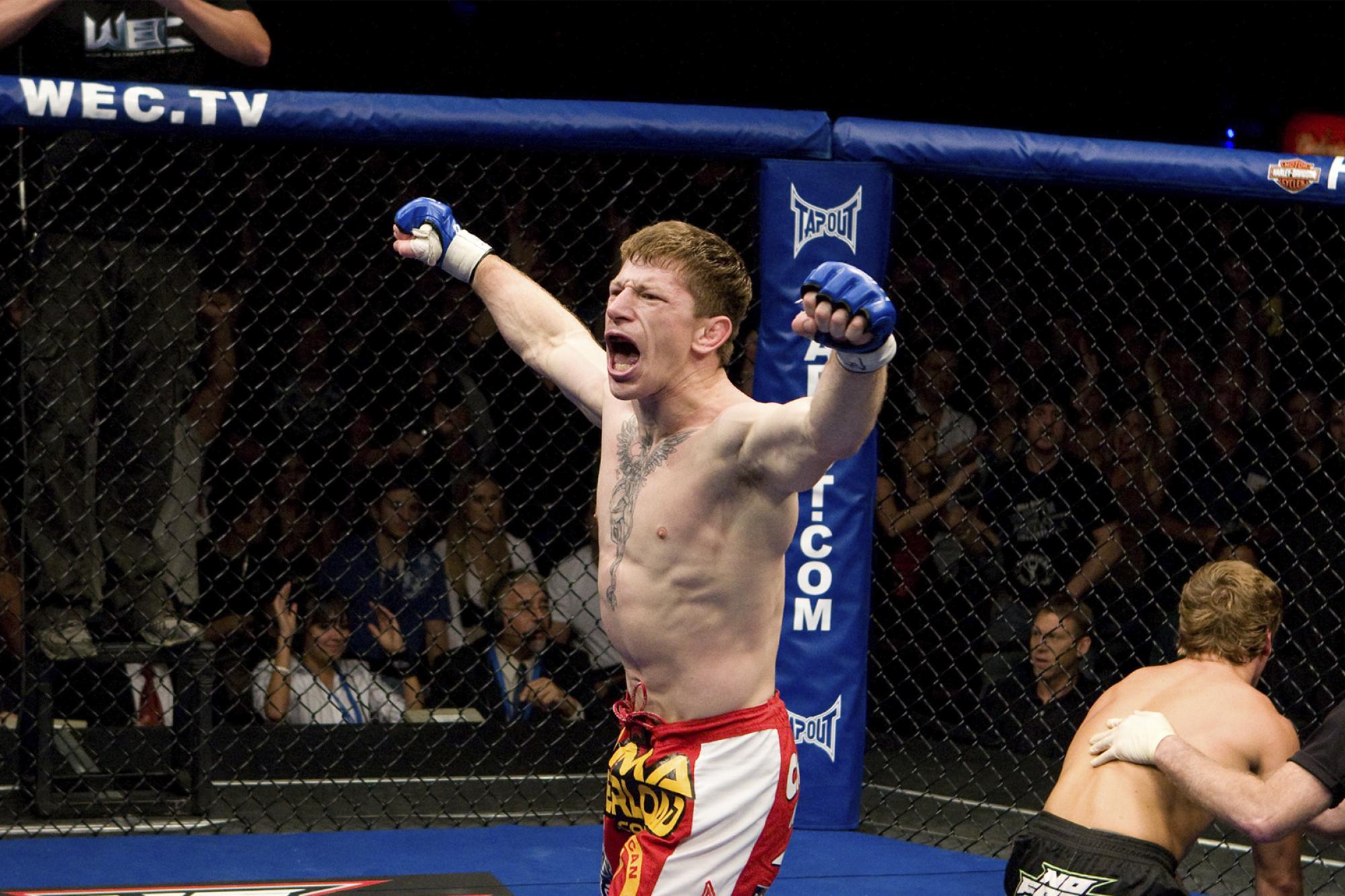 Mike Brown's MMA journey has helped him become one of the best minds in the sport.
By Walker Van Wey • Dec. 14, 2020

In a sport where personalities and “selling fights” rule the social media landscape is it possible for a “we before me” fighter to climb the ranks and win a title?

UFC fans or fans from the Conor McGregor era hear the name or see the man and immediately recognize him as the man behind some of the biggest names in the sport. It may come as a surprise to some that Brown took an axe to the dreams of two of the most devoted WEC veterans in his heyday.

It took only one fight in the WEC for Brown to find himself across the Octagon from the face of the WEC, Urijah Faber, for the WEC Featherweight title. While the jump into the fire would likely inflate the egos of some and intimidate others, it did neither to Mike Brown, who still refers to the jump into the title fight as a fortunate bounce.

“I think I just had a little bit of luck,” Brown said. “I think I just beat the right guy. (Jeff) Curran was the guy everybody was talking about, so I beat the guy who was ranked number two. I don’t know if he was the second-best guy in the world but he was ranked number two, so I beat Curran. I actually think they were planning on having Little Nogueira (Alexandre Nogueira) fight Faber. He was the number one guy and he was the Shooto champion for years so a lot of people thought he was the number one guy for a long time but he lost to Aldo in his WEC debut when nobody knew Aldo.”

According to the pre-fight interviews, Faber, like many others, viewed Brown as a ringer brought in to challenge for the title, while Brown modestly refers to his title shot as luck and pins it on beating the right guy at the right time. What he leaves out is that he was 19-4 with UFC experience to his name. If there was going to be anybody to put an end to Faber’s five-fight title defense streak, it was most likely going to be Brown.

The Hollywood, Florida crowd was stunned as Brown knocked Faber out in the first round. It was a sight most WEC fans didn’t think could ever happen and none wanted to see happen.

Before Brown had left the building, fans were doubting his win. Even broadcasters couldn’t help but mention the number of fans referring to it as a lucky punch in his following fights. Even in the midst of a number of the fanbase questioning his title victory, he never sprouted a chip on his shoulder.

While the chatter was going on around him, Brown kept it moving and stepped into the Octagon with one of the most game opponents in the WEC. Leonard Garcia, who made his WEC debut at WEC 1 where he broke his leg in his promotional debut win, was the type to break a hand and fight for two more rounds. How do we know? He did it before.

Brown was up against grit and heart like few other fighters have. How did Brown plan to combat Garcia’s style? By beating him at his own game before submitting him in under two minutes.

It seemed that even after finishing two of the men who built the WEC in less than half a round, Brown’s champion status was still in question. Scattered boos welcomed Brown to the mic for the post-fight interview before the question was asked, ‘When does Urijah Faber get to challenge for the title again?’

With no ego to be found, Brown welcomed the rematch.

“I was good,” Brown said. “I was happy with it. If that’s what they want, I’m confident. Especially at that time. I felt like whoever they brought to me it wasn’t going to be a problem.”

Not only would the prodigal son get his rematch, it would be in his backyard - Sacramento, California, where Brown didn’t have a friend in sight. Over 13,000 people showed up for one reason only and it was to see Faber get his title back.

Brown would go on to dominate Faber for five rounds, winning by unanimous decision and leaving no doubt in anybody’s mind who the featherweight king was. He was now looking back at two victories over Faber and one over Garcia. He was finally validated. There were no more comparisons to Faber, no more room for talk of luck. The featherweight crown was solely on his head.

Brown didn’t need social media or quick insults at a press conference to earn his shot. It was done respectfully and solely in the Octagon.

Coming up the rankings was another silent but violent featherweight, Jose Aldo. The two met later that year and Brown would lose the title that the world finally admitted was his.

Aldo would go on to convince many he’s the greatest featherweight to ever live. With a title run that spanned six years and reclaiming the title again, it took a true contender for pound-for-pound greatest fighter alive to take the title from Brown.

Looking back, it still seems as though Brown’s title reign has gone lost over time. Perhaps the hope of Faber winning his title back removed any possibility of celebrating the new champion until it was too late. How does Brown feel about his quiet title run now? Believe it or not, without a lick of bitterness.

“I think everybody was starting to get behind me,” Brown said. “I was starting to get a push and then I lost to Aldo. That’s the fight game. I think Aldo is still probably one of the best featherweights who has ever lived. He had the longest reign and all that. I ran into a really tough guy. I think that’s how the sport is.”

Mike Brown would never return to title contention. He did continue to fight for the WEC until the promotion merged with the UFC ten years ago before fighting for the UFC for three years and then retiring to coach full-time.

As one of MMA’s most recognizable coaches, Brown seems to be happier as “the man behind the man (or woman),” than he is as “the former WEC champion.”

“It’s hard to say because everything has its own place and everything helps in different ways, but it’s more about the guys I’m with now,” Brown said. “Dustin Poirier winning the interim belt, Joanna defending her belt so many times, Jorge winning the BMF belt, this is where I’m at now. I’m literally training the best fighters on the planet. That’s pretty special.”

Brown would go on to list seemingly every other fighter he coaches with just as much enthusiasm as the previous one. There’s even less ego in the former featherweight king now than there was when he was on top of the division. To this day, Brown has no idea which of his fighters are familiar with his credentials as a fighter because, as he explains, “It never comes up.”

Brown’s voice carries more happiness discussing the generation he’s producing now than it did when discussing the days where he made a mortal out of the WEC’s most popular fighter and he’s never questioned whether or not he got the attention he deserved.

To this day, it’s only been about the fighting.

“That’s not what I looked at or what I cared about,” Brown explained. “At that time, he was the best guy in the world at that weight and then he wasn’t. I was. That, to me, is what’s special. After me it was Aldo and I’m proud I carried that baton.”

For the entire WEC library sign up for UFC FIGHT PASS TODAY!