Mike Breeden: 'I Want To Be A Fan Favorite'

About seven weeks out from his Saturday bout against Natan Levy, Mike Breeden was already in training camp and loving it, especially since he was starting to see his jawline again.

It was a joke from the 33-year-old from the Missouri native, but the fact that he can joke while getting ready for a fistfight shows just how a fighter’s mood can change when they have a full camp. That’s been a rarity for Breeden throughout his career, especially as of late.

“I don't remember the last time I had a camp,” he said. “I think four fights ago. I had two fights in FAC - a week notice, nine days' notice. The (Alexander) Hernandez fight, nine days’ notice. Romero, I had seven weeks for that but I had surgery seven weeks out. So I signed the contract for Anthony Romero on Contender Series and literally the next night, I had to get surgery, so I was on bed rest for five weeks. I had two or three weeks of light training to prepare for that fight, so it really wasn't even a camp. But this is real nice. I got notified nine, ten weeks out, so it's really nice.”

Breeden lost the Romero bout on DWCS, won the next two in the FAC promotion, but in his short notice debut against Alex Hernandez last October, he was on the wrong end of a first-round knockouts, showing that taking fights without a full camp is often a roll of the dice. Sometimes it works out, sometimes it doesn’t. But getting a shot at an established UFC fighter like Hernandez was an offer Breeden couldn’t refuse.

“It was just an opportunity I couldn't pass on,” he said. “Hernandez has been around the block, he's fought some big names. He did that (scored a first-round stoppage) to Beneil Dariush and he's number three in the world. He's a vet. So if I would have won that fight, it would have put me where I wanted to be, so I had to take that.”

How does the gameplan change when it’s short notice, though?

“When you get those last-minute calls, you really just gotta go for it,” Breeden said. “You really didn't have time to prepare for anybody. I went back to all those fights, and in the Hernandez fight, my range was off, a little bit of my timing. I had double underhooks on Hernandez twice and I didn't spin him to the fence. Those are little details I didn't notice because I'm like, I gotta finish this dude, I gotta come at him hard because there's no telling how long I can push for.”

That’s got to be scary, knowing that at one mysterious point, the gas tank will be empty.

“It's a little scary, but even though I didn't have a real camp, I'm always in the gym, still,” Breeden said. “So I knew I could push; it was just going to be a lot harder than usual. I've been doing this long enough to fight in spurts. I'd find my range, burst and re-settle and go. There's ways to do it, but if you just sprint, you're gonna be in big trouble.” 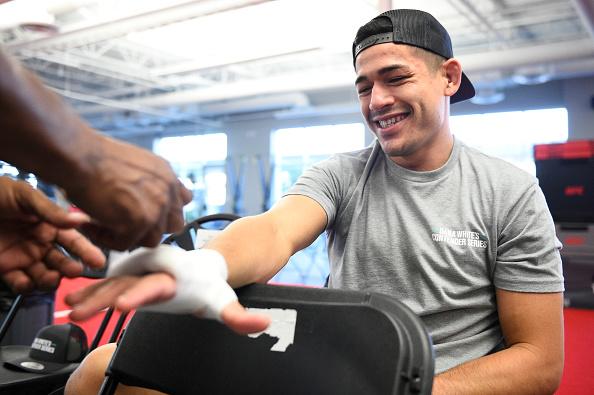 Mike Breeden has his hands wrapped prior to his fight during week four of Dana White's Contender Series season four at UFC APEX on August 25, 2020 in Las Vegas, Nevada. (Photo by Chris Unger/DWCS LLC/Zuffa LLC)

Breeden didn’t get that win in his UFC debut, and that’s disappointing, but not defeating for “Money” Mike.

“I just looked at it as, it is what it is, and my debut is now, my upcoming fight. And I can actually show the world what I'm about.”

With a full camp, to boot. So what does “Full Camp” Breeden look like?

“I want to be a fan favorite,” he said. “I'm gonna push the action, I'm gonna bring the pressure and make it exciting. I just love entertaining.”