Miguel Baeza knew for sure that he made it to "the big show" when he got called to fight longtime veteran, Matt Brown
By Thomas Gerbasi, on Twitter: @TGerbasi • May. 14, 2020

Miguel Baeza did a double take when he first got contacted about a fight with veteran welterweight Matt Brown.

“I was like, 'There are two Matt Browns?'” he laughed. “Is it the Matt Brown that we're thinking of?”

It was. Matt Brown. A member of the UFC roster for nearly 12 years and the owner of the most knockout wins in UFC welterweight division history. And yes, there is only one “Immortal.”

“At first, I was shocked because he's one of those guys you watched in the sport while you were growing up,” said Baeza. “I knew it was a big step up, but I was also excited. So it all kind of hit me at the same time. But it was good to hear it.”

If you’re wondering why “Caramel Thunder” was initially surprised by the matchup, consider that Baeza is one fight into his UFC career, and that when Brown made his pro debut in 2005, the Floridian was just 13. So that was a normal reaction. It was also a sign that the UFC sees the upside of the unbeaten prospect and is confident that he has what it takes to be on a level playing field with Brown.

“It made me realize that this was the big show,” Baeza said. “They can call you up any second and call you up for a guy that maybe you don't know very well or a name that strikes fear in most guys. It's a big one, and at first, I got caught up in the name a little bit. Then I thought about it, and the UFC must think pretty highly of me if they're throwing me in there with a name like Matt Brown. It's gonna be a lot of fun stepping into the cage with him.” 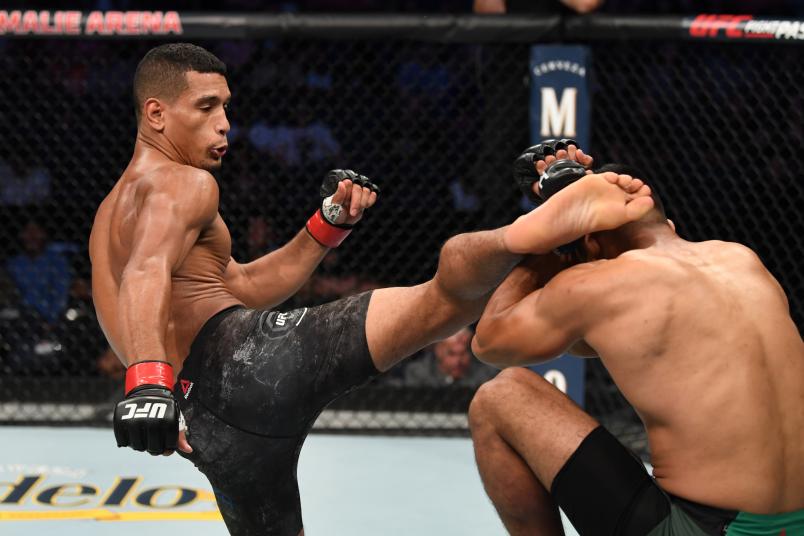 But does he prefer the unknown opponent or the one that strikes fear in the hearts of men?

Getting locked in an Octagon with Brown for 15 minutes or less doesn’t sound like fun for anyone but those who get paid to fight for a living. They’re a different breed, and on that theme, let’s not forget to point out that Baeza was initially scheduled to face Brown in his Columbus hometown in March, another aspect of the fight that didn’t bother him a bit.

What may be new to the 27-year-old is the new reality of fighting in front of no fans this Saturday in Jacksonville due to the COVID-19 pandemic. Then again, he did earn his contract fighting on Dana White’s Contender Series last June with only a small crowd in attendance. So he’s somewhat prepared for the new normal.

“I remember hearing his corner as if he was in my ear,” said Baeza of his fight with Victor Reyna. “I thought, ‘This is weird.’ I could hear his coach telling him exactly what to do.”

Whether it helped or not, Baeza left the Octagon that night in Las Vegas with a unanimous decision victory, but he didn’t know if he would get a UFC contract to go with it, so there were no smiles or joyous celebrations after the final verdict was rendered.

He didn’t blow it. Instead, Baeza joined Miles Johns in getting UFC contracts, but still the Boricua from Davie, Florida didn’t smile. That would come four months later when he made his UFC debut in Tampa and halted Hector Aldana in the second round. He finally got his finish, and we got to see that he had teeth.

“You're right, I had a brief moment where I cracked a smile and I got ripped into by my coaches later on,” he laughs. “Nah, I'm kidding. But it was great because a lot of my family were there, a lot of my friends from down south. Everybody made the trip up and that was probably the best part of it, to win in front of them. That's why you saw me crack a smile.”

And presumably he’s left the disappointment of his Contender Series fight behind him, right?

“I feel like I'm gonna hold on to that one for a real long time.”

I don’t know if he’s serious or not, but it may be safe to say that a win over Matt Brown would soothe all past wounds.

“Maybe,” he laughs now, but he will be all business on Saturday night. He knows that a win over a respected veteran will take his profile to a new level, one that includes more big fights. But that’s a conversation for Sunday morning, not now.

“I haven't really looked past Matt Brown, so my focus has just been trying to make sure I get the win,” Baeza said. “I haven't thought about the aftermath. I know it's a big step up and I know that after this everything's gonna change, but the saying is, you don't want to count your chickens before they hatch, so I have to get the job done. I've gotta beat him first.”