Reaching The Top Of The UFC Welterweight Division Is A Difficult Task That Miguel Baeza Is Excited To Take On.
By E. Spencer Kyte, on Twitter @SpencerKyte • Nov. 10, 2021

Back in June, Miguel Baeza stumbled for the first time in his professional career, landing on the wrong side of the scorecards in a competitive bout with veteran welterweight contender Santiago Ponzinibbio that earned the duo Fight of the Night honors.

After beginning his career with 10 consecutive victories, including a trio of stoppages in his first three appearances inside the Octagon, the 29-year-old walked out of the cage reflecting on a loss for the first time, identifying areas that needed improvement while struggling to find many positives to latch onto.

“Uh — it’s tough, but… man, it’s really hard,” said Baeza on Wednesday afternoon, searching for positive elements from his loss to Ponzinibbio just a few days ahead of his return to action opposite Khaos Williams on Saturday. “It helped me understand that I’m not too far from where I want to get, so I guess that’s a positive.”

While the MMA Masters product is perpetually hard on himself like many of his contemporaries, dropping a decision to a battle-tested divisional stalwart like Ponzinibbio after just 10 pro fights certainly isn’t something for Baeza to hang his head about. Less than two years after earning his contract with a victory on Dana White’s Contender Series, the native of Floridian was competing on the biggest stage in the sport, against a seasoned veteran with three-times as much experience, and he got the better of things early on.

Though Ponzinibbio steadied himself and rallied back to take the last two rounds on all three scorecards and earn the victory, Baeza showed he’s able to hang with a ranked opponent, and likely not far away from earning a number next to his name himself.

“I think it’s just the details and the preparation,” the welterweight hopeful began when asked about the changes he’s made since his last appearance and how he takes the next step forward in the talent-rich 170-pound weight class. “It’s about working smarter, instead of working too hard; treating my body like a machine — you’ve got to put in the right fuel, have the right recovery, and do the right things leading up to fights to make sure I’m able to fight at my peak performance. 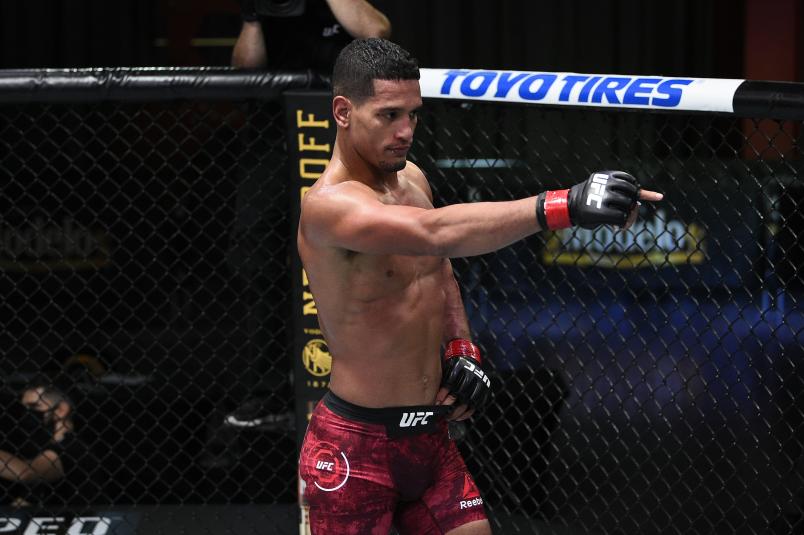 Miguel Baeza reacts after submitting Takashi Soto of Japan in their welterweight bout during the UFC Fight Night at UFC APEX on November 28, 2020 in Las Vegas, Nevada. (Photo by Chris Unger/Zuffa LLC)

“I think that’s going to be the difference, and that’s definitely what I took away from that fight.”

In the five months since that fight with Ponzinibbio, the well-rounded finisher has focused in on a few key elements outside of the cage that needed some refining as he looked to ready himself for a return to action.

“Not that my nutrition was bad, but I feel like sometimes I would take things too far, like I’m cutting weight by doing what I’ve been doing for years, not really getting any science behind it,” explained Baeza, who earned Performance of the Night bonuses for his second-round stoppage wins over Matt Brown and Takeshi Sato in his two 2020 appearances. “The strength and conditioning, I’m trying to use that in a more sport-specific way — to be faster, be stronger in my sport, and not just faster and stronger.

“I have to prepare the right way,” he added. “I think that’s going to be the difference between getting wins against these high-level guys in the UFC — doing the small, little things, like making sure I’m cutting weight the right way so that it doesn’t impact my performance.

“There are still things I know I can do better, so after this fight, I plan on doing the same thing: analyzing my entire camp, inside and outside of the gym, to make sure I’m putting the best version of Miguel out there.”

That’s the kind of mindset and approach that can often make a significant impact in an individual’s career, and when you’re talking about someone that has already proven themselves to be quite good at their craft, the fact that they’re committed to constantly stripping things down in order to get the absolute most out of themselves and every training session can be the difference between being a Top 15 staple and a potential title challenger. 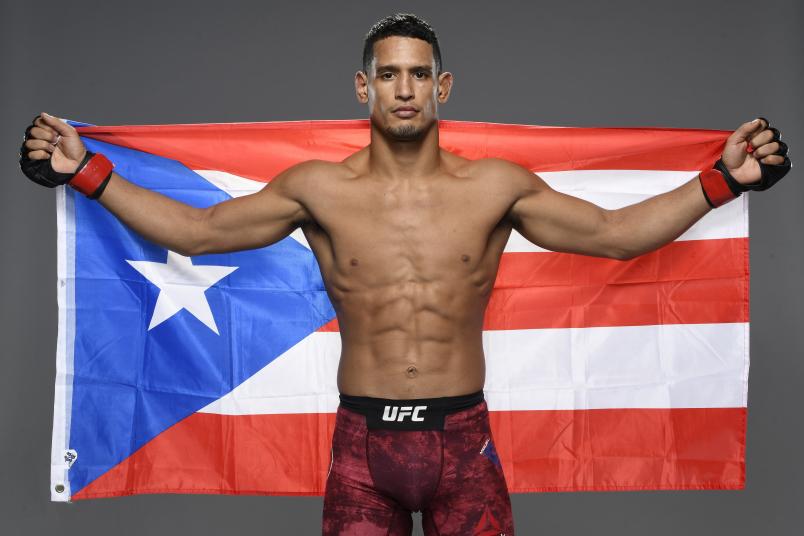 Reaching that level is certainly something Baeza wants to achieve, but those future ambitions run a distant second to stepping into the Octagon this weekend and handling his business.

“I focus on each fight as it comes, so my focus is just on beating Khaos Williams; doing the right things in the gym to make sure I’m ready to fight Khaos,” Baeza said when asked about returning after suffering the first loss of his career, espousing a version of the “0-0 every time I fight” philosophy adhered to by one of Saturday’s headliners, former featherweight champ Max “Blessed” Holloway. “I’m not thinking about Ponzinibbio because I’m not fighting him; I’m fighting Khaos.

Best Finishes From The Athletes Of UFC Fight Night: Holloway vs Rodriguez

“I haven’t been focused on anything else, so hopefully that results in me getting the win,” he added. “It’s about who’s in front of me now, nothing else.”

And while he’s familiar with Williams’ handiwork and cognizant of the weapons he brings to the table this weekend, Baeza’s focus is on getting to compete and prove himself much more than it is on who he’s sharing the Octagon with in Las Vegas.

“I’ve seen him fight, he’s a tough guy, but to be honest, it’s all the same to me at this point,” he said when asked about the pairing. “I wanted to fight, I wanted to get in there and prove I’m one of the better welterweights in the division, if not the world.

“I didn’t overthink it. I didn’t celebrate or get nervous; it’s just, ‘Okay, let’s fight.’

“I’m in the UFC to fight,” he added. “I don’t pick fights. If you’re in my division, it’s more than likely we’re going to cross paths, so let’s make it happen.”

As for how he sees things playing out when the cage door closes on Saturday, his answer mirrored his prediction.

“I plan on making it a short night,” he said quickly. “I don’t get paid by the hour.”