Miguel Baeza may have earned a contract on Dana White's Contender Series, but he's not even close to satisfied. Find out why:
By Thomas Gerbasi • Aug. 21, 2019

If you haven’t seen it with your own eyes, you might not believe it, but when legendary boxers like Felix Trinidad used to fight, in Puerto Rican homes it wasn’t just a fight night; it was almost like a national holiday celebrated in honor of one of your own.

“I remember as a kid watching ‘Tito’ fight and that was a party in itself,” he said. “We’d get the family together, buy the pay-per-view, have a barbecue, and it was a big thing. My uncles would be watching the fights and I’d never seen so much shadowboxing in my life.”

Baeza laughs, but that’s the kind of connection fighters like Trinidad had with Puerto Ricans both on the island and abroad. It’s a love shared with other world champions like Miguel Cotto, Wilfredo Gomez and Wilfred Benitez, as well, and something Puerto Rican mixed martial artists like Baeza hope to one day bring to their sport.

“That’s definitely a goal of mine right there,” said Baeza, who earned a UFC contract with a win over Victor Reyna on June 25. “In boxing, Puerto Ricans are all over that. There are great Puerto Rican fighters, great Puerto Rican champions, but not a lot in MMA. I really want to show that we can do it all.”

He’s got the chance now, and that’s great news for the welterweight prospect, who turns 27 this Friday. You might not have known how great judging by Baeza’s response to his win over Reyna. 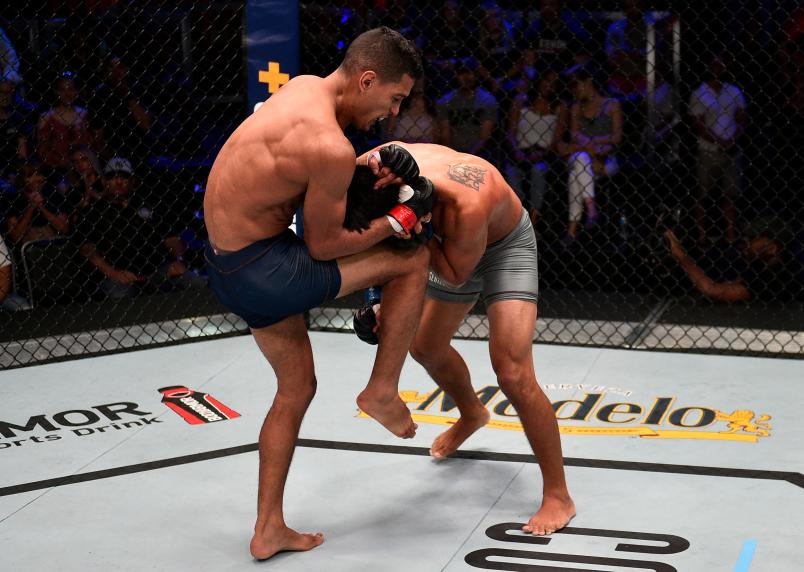 “I caught a lot of flack for that when I got back home,” he laughs. “After the fight, it’s crazy. I was happy to get the win, but I wasn’t really happy with my performance and being the first fight, I didn’t know how it was gonna play out. My mind went to the worst place – there’s gonna be a bunch of knockouts and they’re gonna get those guys. I couldn’t finish my guy and I had a sub-par performance, so my mind went to that and that’s why I was all gloom and doom after the fight. But when I got my name called, I was so taken aback by it, I didn’t know how to react. It was all a rush. Afterwards, I got to see my family and hang out with my friends and it hit me then and the smile came on my face.”

No, Baeza didn’t finish Reyna, and with five knockouts in his six pro MMA wins, going the distance isn’t something “Caramel Thunder” was accustomed to. But…a little background is necessary when discussing what happened in Las Vegas in June.

First, Baeza lost his original opponent on the Contender Series – Ramiz Brahimaj – less than two weeks out from the fight. Then, Brahimaj’s replacement – Reyna – weighed in at 178 pounds for the welterweight bout.

Two strikes already against him, Baeza refused to let a third strike sail by him. And while he didn’t get a home run blast on fight night, a game-winning double certainly fit the bill to get him his UFC deal. And his tenacity and toughness was evident throughout the whole process.

“A lot of it is mental fortitude and you just gotta keep going forward and not get so caught up in it,” he said. “A big thing I didn’t want to get caught up with was the show itself. You’re fighting in front of Dana White, you’re gonna be on TV, this is going to be the most televised fight you’ve ever had, the change of opponent and all that, I tried to tell myself it’s all the same. I’m fighting, that’s all that matters, I’m getting in the cage and I’m gonna beat somebody up. That’s my job. And what I was gonna do was get that W.”

He got it, and now he’s in the big show. That victory changed Baeza’s life and career, but not just in the obvious ways. What many don’t understand is that life on the regional circuit is often like the Wild Wild West, especially for fighters with less than ten bouts like Baeza.

“The regional circuit is always unpredictable,” he said. “I’ve had guys bail out of fights, and I was even on a show where the whole thing disintegrated and there was no show at all. So to have the stability now, I don’t even know how to describe it. It’s a weight off your shoulders knowing that you’re gonna get paid and you’re gonna have a fight.”

It may have even helped Baeza deal with the situation he faced in June. And the way he dealt with it was to grit his teeth and fight. 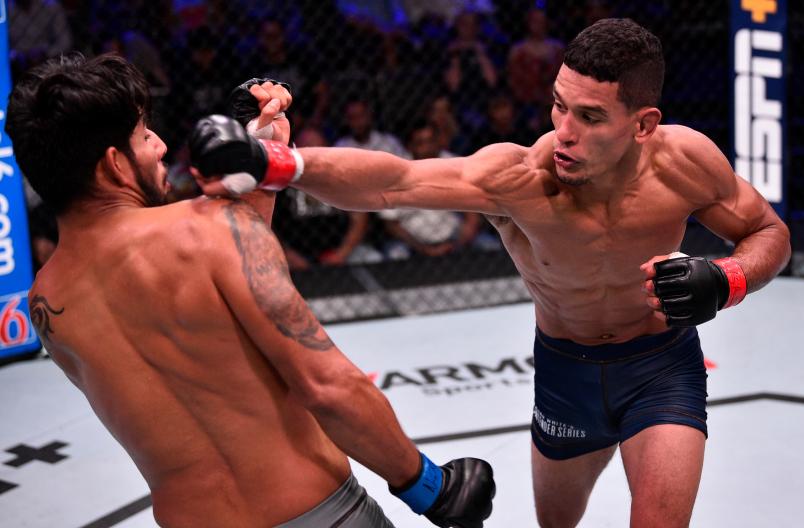 “When it happened, I wasn’t happy about it, but it wasn’t anything I hadn’t seen before, so my concern was more like, am I still fighting?” he said. “It was an amazing opportunity, I didn’t want it to go by, so it didn’t matter who they put in front of me. I was gonna try to do the same thing to whoever it was – knock him out, tap him out, finish it.”

Baeza didn’t get his finish, but there’s plenty of time for that now that he’s in the UFC. In the meantime, he’ll remain a perfectionist.

“I wouldn’t call myself that,” he laughs. “But I guess everybody around me would say that.”