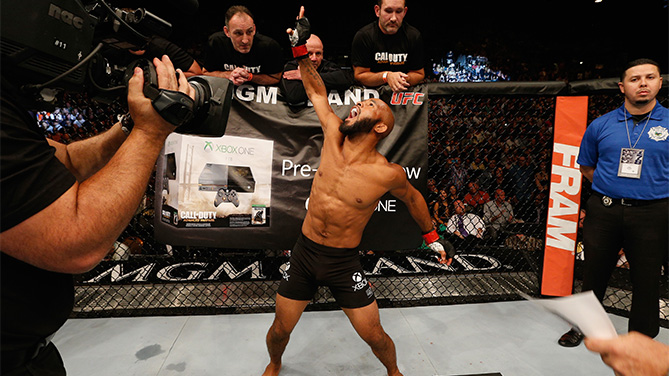 LAS VEGAS, September 27 – Heading into his UFC 178 main event bout against Chris Cariaso at the MGM Grand Garden Arena Saturday, UFC flyweight champion Demetrious Johnson was a huge favorite, and he did what great champions do in such situations, dominating then submitting Cariaso in the second round.

The victory was the seventh for “Mighty Mouse,” and the fifth successful defense of his 125-pound title.

After a brief feeling out process to kick off the bout, Johnson took Cariaso down in the second minute and went to work, trying to improve position in rapid-fire fashion. Cariaso’s defense was good, and he eventually made it back to his feet, although he remained in Johnson’s grip along the fence. With a minute left, Cariaso broke loose, but he was unable to do anything of note before the horn, as it was Johnson catching and stunning him in the closing seconds.

Johnson put the stand-up pressure on in round two, but a slip by Cariaso put the fight back on the deck. The champion moved into side control, letting loose with his strikes before locking up an arm. Moments later, Cariaso tapped out, with the end coming at the 2:29 mark.