Read on for the latest installment in UFC.com's weekly series of articles on proper nutrition from the biggest names in mixed martial arts...this week, Demetrious Johnson 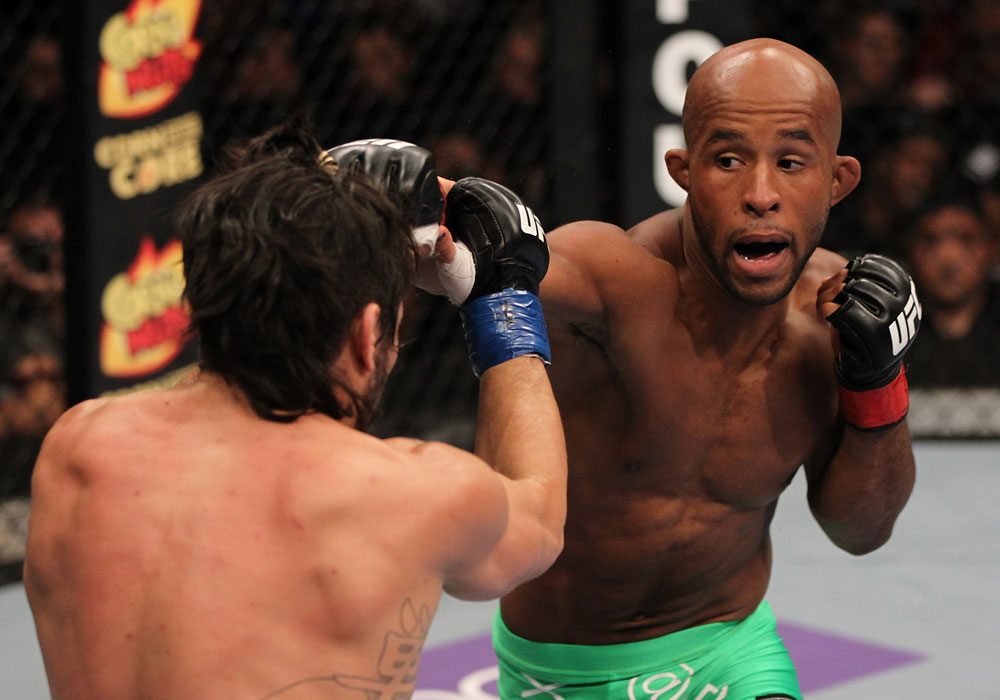 A few weeks before a fight that could define his career and forever shape the way strangers perceive him, Demetrious Johnson has been tipping the scales in the neighborhood of 141 pounds – putting him right on pace to make the 125-pound weight limit at UFC 152. I caught up with the former bantamweight to talk eating habits before his clash with Joseph Benavidez in the first-ever UFC flyweight title match. At stake on Sept. 22 in Toronto: Eternity in the history books.

A DAY IN THE EATING LIFE OF MIGHTY MOUSE

* 10 a.m.: Head off for a power, strength, speed and agility workout that lasts one to two hours.

* Post workout: Head over to Teriyaki Madness and get their special – grilled chicken, brown rice, cucumbers and teriyaki sauce. (“It doesn’t have to be white meat chicken,” Johnson said.).

* 8:30 p.m. Dinner with his wife (“Last night she cooked me whole wheat pasta. Sometimes she’ll cook me black beans with corn. Or chicken breast with spices. Even when I’m not training for a fight I try to eat healthy. I don’t like stuff that is processed.”).

Yeah, I can get away with it. I had a frosty the other night (from Wendy’s) and my weight is still low. Right now I’m walking around at 141, 142 (pounds), which is right where I need to be three weeks out from the fight. I’m right on schedule to make weight. I don’t deprive my body of what it wants naturally. I enjoy my Wendy’s, Burger King and Jack-In-The-Box. I have a sweet tooth so I eat a lot of frozen yogurt, a lot of sugar, so I just cut a lot of the bad stuff out. I usually eat healthy.

All I drink is water and milk when I’m dieting. Just regular water, from the faucet. It doesn’t matter, as long as it doesn’t taste like crap. Our water here (in Washington state) is pretty good.

I rarely add any extra protein. If I take a protein shake I might stop on the way to the gym and grab a Muscle Milk.

Corn, chicken nuggets and a little brownie. That’s what I used to eat all the time growing up.

I don’t need a diet or a dietician, it’s just eating smart. You don’t want to deprive your body of everything (it craves) because, in my mind, you need that sugar and all that stuff. Now, some of those foods will leave inflammation in your body longer, so the cleaner you eat the faster your body will heal.

WHEN I WAS A BANTAMWEIGHT

I ate whatever I saw. If I saw a milkshake, I drank it. I ate everything and I didn’t care because to me everything was just energy and fuel.

I wasn’t eating fast food back then but I ate much bigger portions. I also lifted a lot heavier. Right now I still eat pretty much everything I want but it’s all healthy stuff. Now instead of drinking a milkshake every night I drink water.

I just eat smart and don’t get too much in detail. The first time I cut to 125 I cut out carbs and did a whole bunch of stuff and basically hurt my body going into the fight. So I learned that you don’t want to change your diet too much when you’re training … it’s a lifestyle. I try to have a healthy eating lifestyle and organic is not part of my regular lifestyle so I don’t think too much of it.

I’m not a big fan of hamburgers during camp because when I eat very healthy then a hamburger doesn’t settle very well in my stomach. But after the fight I’ll get a double cheeseburger and a milkshake.

Nope, not that I know of yet!