"Mighty Mouse" Back to Save The Day 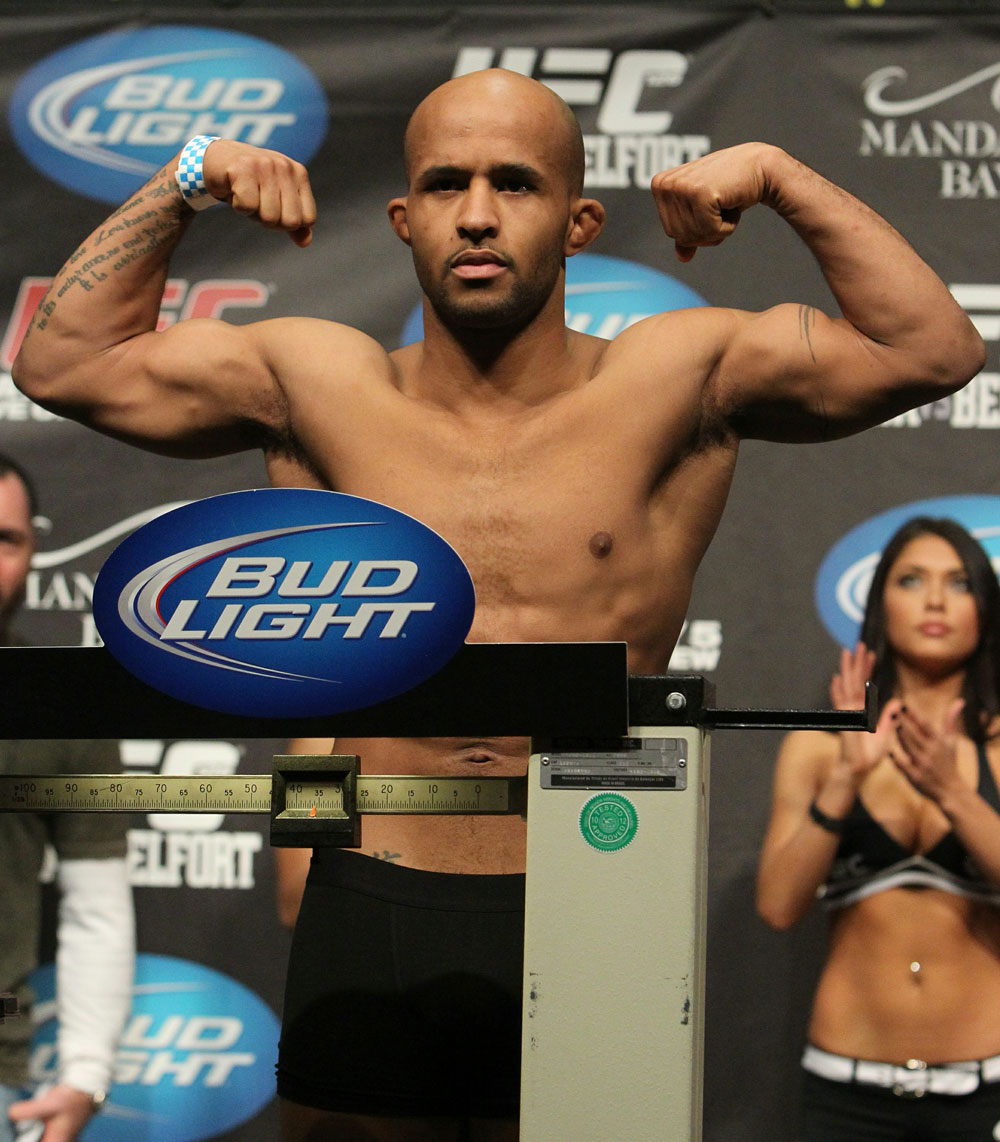 The UFC is in the honeymoon stage with its bantamweights. Last year’s marriage between the UFC and the WEC ushered in a vast talent pool of lighter fighters, and the sprightliest of the weight classes has quickly become one of the most compelling in the company.

There are almost too many great 135ers to name and each one more exciting than the next. Brian Bowles, Scott Jorgensen, Joseph Benavidez, Michael McDonald, Takeya Mizugaki, and the list goes on and on. Not to mention, the champion Dominick Cruz and his number one contender Urijah Faber.

It’s a matchmaker’s dream come true, as it’s impossible to make a bad matchup for the fans. Even if a fighter is forced to withdraw due to injury, there is a litany of high level fighters waiting in the wings ready to step-in and, possibly, make an even more entertaining fight than the original. Case in point: Demetrious Johnson vs. Miguel Angel Torres at UFC 130.

Originally, Torres, the former WEC bantamweight champion, was scheduled to fight British brawler Brad “One Punch” Pickett. That would’ve been a fun fight. On the same card, Johnson was set to face Brazilian submission machine Renan Barao. That would’ve been a wonderful fight. But, Pickett gets injured and the UFC calls Johnson in to replace him. Meanwhile, Barao will now fight WEC veteran Cole Escovedo. There is simply no wrong move to be made with these bantamweights.

“When (matchmaker) Sean Shelby called, Matt [Hume] said ‘are you asking him or telling him to fight Miguel Torres because DJ will do what you tell him to do.’ This is my job. This is what they pay me to do. They don't pay me to go out there to look pretty. They pay me to go out there and fight and I like to fight. Whether it is Renan Barao or Miguel Torres, I feel exactly the same about the fight. My coaches put together a solid gameplan and then I'm ready to fight.”

That’s the short and sweet of it for the 5-foot-3 Demetrious “Mighty Mouse” Johnson. The opponents are interchangeable. They’re all tough and Johnson is ready, willing, and able to take them on to get to the top. Being a professional fighter is about training, fighting and winning, regardless of who the competition is.

Even with the switch of opponents, there were no hiccups in the 24 year old’s fight preparation at AMC Pankration in Kirkland, Washington. “When I was training for Renan Barao I was already training really hard for him,” Johnson continues. “When they switched it to Miguel Torres, I just kept on track, preparing myself to be the best ‘Mighty Mouse’ I can be on May 28th. I added a little bit more to spice up my cardio, so my gas tank is longer and my explosion is stronger. I'm excited to get in there and mix it up with Miguel Torres.”

On paper, this is a bigger fight for Johnson, considering Torres is easily one of the most famous and respected names in the bantamweight division. “It's nice to fight Miguel Torres because there's a lot more in it for me if I win, but I approach all the fights the same,” notes Johnson. But beating a well-known fighter has its perks, which he knows all about after his UFC 126 win over Norifumi “Kid” Yamamoto. “I'm just looking to go in there and execute my gameplan. Make sure to go in there and give 110% and make it an exciting fight for the fans. At the end of the day if my bosses Sean Shelby, Joe Silva and Dana White are happy with the fight, then that's it.”

The keys to Johnson’s gameplan are speed and movement and lots of both. “I'm not going to let you hit me, but I'm going to put pressure on you until you make mistakes, like I did with ‘Kid’ Yamamoto,” says Johnson about his flawless unanimous decision performance against the revered Japanese superstar. “I'll capitalize on those mistakes and make you pay for it. I plan on going out and doing my usual, putting pressure on him and using my footwork.”

An aggressive fight with a frenetic pace is exactly what the fans have to come to expect from him. There’s a certain buzz about this fight, which is a mixture of Johnson’s style and Torres’ last fight. There are high expectations for Torres in the UFC, but his debut bout against Antonio Banuelos was the least exciting of Torres’ Zuffa career. It was a three round conservative striking match, where neither fighter appeared to take a risk or to get inside on the other.

“His last fight with Antonio Banuelos, everyone got to see what he wants to do with shorter fighters. Antonio was scared to engage him and I don't blame Antonio Banuelos. Miguel Torres didn't want to engage Banuelos either. He played the tall man's game, but in the UFC you want to see attacking fights where guys go all out.”

Johnson will need to break through the taller Torres’ game, where recently other fighters Johnson’s size have failed. “He's been knocking off the 5-3 wrestlers, Charlie Valencia, Antonio Banuelos,” jokes Johnson about Torres’ back-to-back wins against pint-sized opponents, but prior to that, Torres did lose to Joseph Benavidez due to a second round guillotine choke. “It crosses my mind that he's 5-9 with a reach of 76 inches. He's real tall, lanky and boney for the weight class. But I'm short and compact, so if he wants to him me in my head he has to bend down to hit me, when all I have to do is raise my arm up to hit him.”

“Mighty Mouse” has been battling and overcoming size advantages his whole career, earning him his 13-1 record, a three fight win streak and his nickname from teammate Steve Skidds. “I walk around at like 140, so I'm the smallest guy and I’m 5-3, so I'm also the shortest,” Johnson continues, noting that his big ears explain the “mouse” part, but as far as the “mighty”, it has to do with who he trains with. “I've sparred with guys like Tim Boetsch, Rich Franklin, Matt Brown, and I'll hang with them too. Back in the day when I was an amateur, I weighed 126 and I was still training with bigger guys like Matt Brown, so that's how that nickname landed on me.”

On May 28th in Las Vegas, Nevada, the question of speed versus size will be answered as Johnson takes on Torres. “I always move, I always make sure my opponent never gets a lock on me,” says the rising star, who will push the fight every second against the former WEC bantamweight champion. “It's going to be a good fight for the fans and a good fight for the UFC to see where the bantamweight division lies.” And with the 135-pound division in the hands of contenders like “Mighty Mouse”, this marriage of the UFC and lighter fighters will never lose its spark.