Mighty Max Beats Miller; Is Cub Up Next? 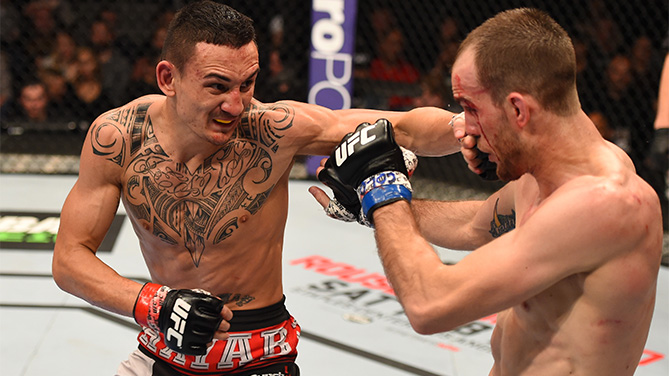 With five consecutive wins, Max Holloway’s run up the featherweight ladder is gaining speed, but it was that fifth victory over Cole Miller Saturday night at 1st Bank Center in Broomfield, Colorado that showed the maturity of the 23-year-old Hawaiian phenom, as he bounced back from a slow start to take command in the latter stages of the UFC Fight Night co-main event.

Scores were 30-27 and 29-28 twice for Holloway, who could be back in action in Newark, New Jersey on April 18 to face perennial contender Cub Swanson.

The biggest shot of the opening round was likely Holloway’s left kick to the midsection, but outside of that, it was Miller who used his range well standing and then showed off his ground game late to cap off a solid frame.

The back-and-forth action continued in the second until a clash of heads brought a momentary halt to the bout midway through the round, cutting Miller over the left eye in the process. The exchanges heated up from there, but this time it was Holloway finishing strong at close range against the fence.

With the fight up for grabs, Holloway turned up the heat in the final round, and though it was the Hawaiian a step ahead throughout, Miller’s heart and determination kept him in the bout until the final horn, even though he didn’t get the end result he was after. 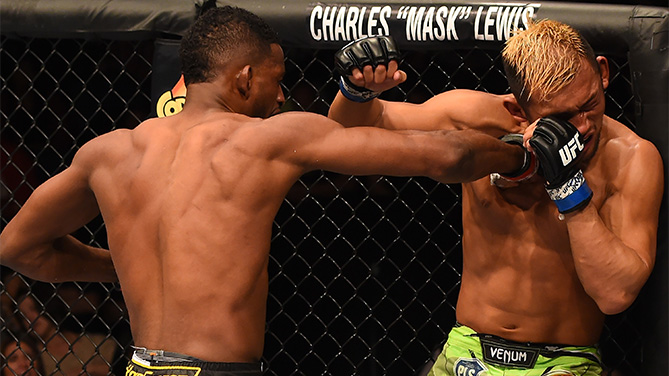 After tying the UFC record for most victories in a calendar year in 2014, Denver welterweight Neil Magny kept his streak going, winning his sixth straight by submitting Kiichi Kunimoto in the third round.

Magny produced a brilliant effort in the first round, not only tagging Kunimoto at long range, but wearing him down in the clinch as well, forcing the Japanese vet to feel the high altitude even more.

Kunimoto was able to get Magny to the canvas in the second minute of round two, but after a few moments on his back, the Coloradan got to his feet, rocked Kunimoto with his punches and took him down to the mat, where he delivered a series of unanswered strikes that nearly ended the bout.

Picking up where he left off, Magny took Kunimoto down early in the third, almost finished with strikes and then left no doubt with a rear naked choke that forced the gutsy Kunimoto to tap out at 1:22 of the round. 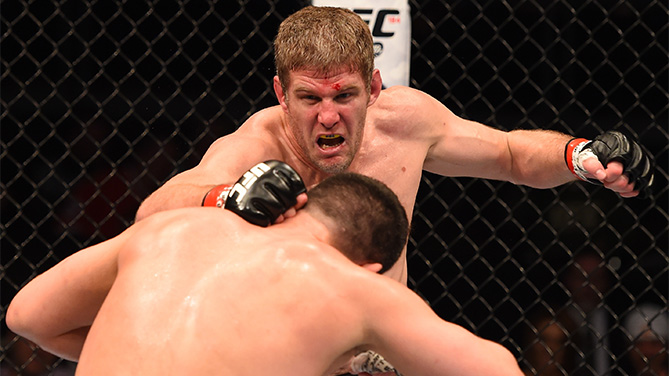 The two southpaw grapplers kept it standing for much of the first round, with Walsh the busier of the two but Kelly packing a heavier punch. In the closing seconds though, Walsh may have broken open a close frame with a slick takedown.

Round two provided more stand-up action, and while the techniques were sloppy from the pair, the fans got a charge out of the competitive battling. A round later, they weren’t as happy as the pace dipped and produced more swinging and missing than landed shots, but Kelly finished the stronger of the two.
> Watch: Daniel Kelly Backstage Interview 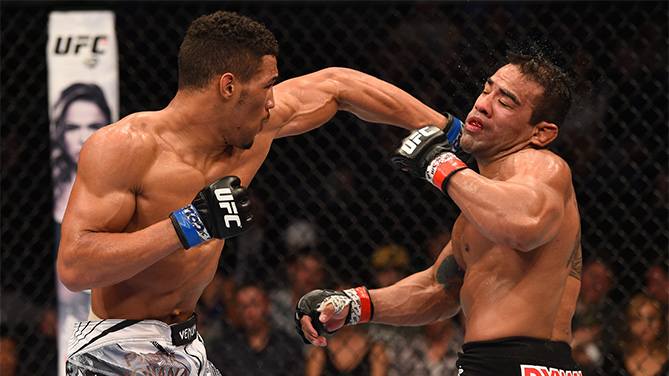 Prazeres (18-2) got the takedown early, easily getting out of Lee’s guillotine attempt. Lee rose to his feet and shook Prazeres off his back, kicking off some striking exchanges between the two, with the busier Las Vegan holding the edge.

After getting peppered with more strikes by Lee, Prazeres went after the takedown hard and got one, but after Lee rose, “The Motown Phenom” took the bout to the mat himself and controlled the Brazilian powerhouse on the ground.

Lee (10-1) turned up the heat with ground strikes in the third and nearly sunk in a rear naked choke in the final seconds, dominating the round and capping off a huge victory.
> Watch: Kevin Lee Backstage Interview 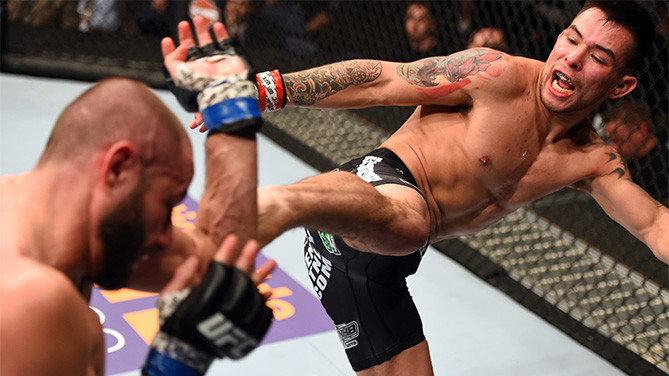 Flyweight prospect Ray Borg continued to impress in the main card opener, picking up his second UFC win by submitting Chris Kelades in the third round.

Despite his pre-fight desire to show off his stand-up game, Borg got the bout to the mat early and he controlled matters there, working his ground-and-pound attack before a guillotine choke attempt allowed Kelades to reverse position. With two minutes left, the combatants rose, but Borg slammed his foe back to the canvas twice, allowing him to stay in the lead and sink in an arm triangle choke attempt just before the bell.

Borg didn’t let up in the second, dominating the ground action once more and nearly finishing with a D’Arce choke in the process, and in the third, the 21-year-old closed the deal, blitzing Kelades on the mat and locking in a kimura that forced the Canadian to tap out at 2:56 of the final frame.