In Her First Main Event Since Returning To The Sport, Miesha Tate Hopes To Continue Her March To Title Contention At UFC Fight Night: Vieira vs Tate
By Thomas Gerbasi, on Twitter @tgerbasi • Nov. 17, 2021

“I know I’m back as a UFC fighter. It’s been a long journey, but I can definitely feel comfortable saying that I’m back.”

Miesha Tate’s declaration almost feels John Wick-esque, and when she engaged in her first fight since 2016 against Marion Reneau in July, she was quite the action hero as she became the first fighter to stop “The Belizean Bruiser,” picking up her first knockout victory since 2009 in the process.

Yeah, I’m thinking she’s back. But this is no one-off for the former UFC women’s bantamweight champion. She’s chasing gold again.

“I look back at my first UFC title as a great memory, but it’s not just a memory,” said the 35-year-old. ”I have recreated myself. I have the stability in my life to finally put the best version of myself forward, so it’s a goal again. And that changes everything. I know what it feels like to be a world champion and I want that more than anything.”

Back in March of 2016, Tate was on top of the world as she brought a four-fight winning streak into her fight with Holly Holm, who was riding pretty high herself after beating the seemingly unbeatable Ronda Rousey four months prior. And if you were playing MMA math, Rousey beat Tate twice, so Holm was obviously going to win.

No one told Tate, though, and despite falling behind on the scorecards and needing a fifth-round finish to win the fight and the title, she did just that, submitting Holm to take the 135-pound belt.

“That was symbolic of my life,” she said. “I always had to push through adversity, and I had so many battles before that victory. And I feel like that fight summed up my career and kind of summed up my life at that point. I was never starting out ahead, but I always had to find a way to win.” 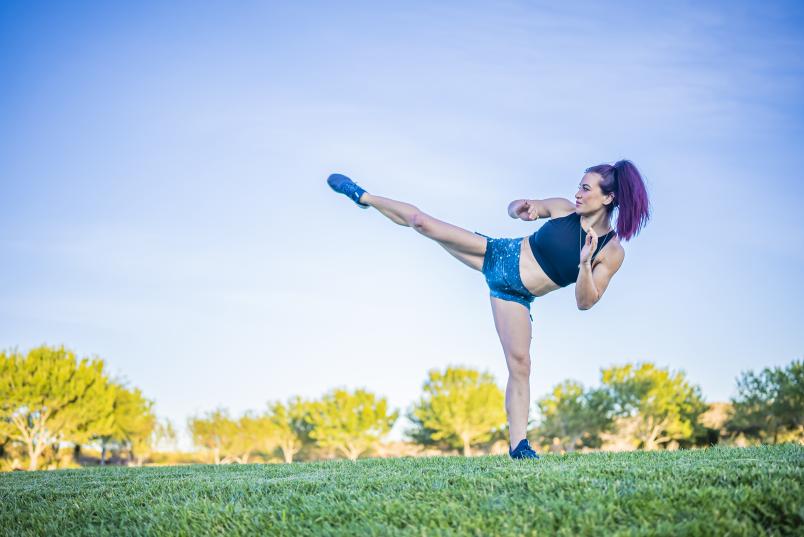 Tate’s win was one of the feel-good stories of the year, but by November, she had lost her title to Amanda Nunes and dropped a decision to Raquel Pennington. After that UFC 205 fight, she walked away.

The decision to retire shocked the MMA world, but Tate was content with the decision.

“Truthfully, at that point in my life I never thought I would fight again,” she said. And unlike most combat sports retirements, this one stuck, with Tate having two babies with her partner, Johnny Nunes, participating on podcasts, and even delving into fighter management for a spell. So just as shocking as her retirement was, her announcement that she was returning this year brought just as much surprise.

Then came the Reneau fight, and more surprise, this time that she didn’t just not skip a beat from 2016, but that she looked better than ever in beating a quality foe on the big stage. But Tate knew she had the win as soon as Bruce Buffer was introducing the combatants.

“I always think I’m gonna enjoy this moment so much when Bruce Buffer is announcing me, but truth be told, once I lock eyes with my opponent, I don’t like to break that stare,” said Tate. “And I smiled because she (Reneau) broke that stare. And I hear Bruce Buffer and I’m taking it all in, but that’s just stalling until I could get a hold of her. And that smile was knowing that she had broken before the fight had even begun.”

At 1:53 of the third round, the referee stopped the fight and Tate had her win and a Performance of the Night bonus. And when she let out a scream in victory, it was one she had been holding in for years.

“This was five years in the making, a whole transition from the moment I retired and thought I wouldn’t even want to do this again, much less would I do it again,” she said. “And I felt so good to be back there and to want to be back there, and to get that win and do something that no one had done – finish Marion Reneau – it was just the victory cry.”

Now it’s time to do it again, this time in a five-round main event against Brazil’s Ketlen Vieira this Saturday in Las Vegas.

“Five rounds, main event,” said Tate. “This is the progression that I wanted. I didn’t want five rounds in my first fight, I didn’t want a main event, I didn’t care about being on pay-per-view. I didn’t care about any of those things; I just wanted to come back and win a fight. Now I’ve got Ketlen Vieira standing in my way. It’s this weird Twilight Zone of being a veteran but also feeling like a fresh, new fighter. I’m ready. This is what I wanted.”

“The new journey is just getting started,” she said. “Tate 2.0 is not one fight, not two fights. It’s a journey to the title, and that’s where I’m headed.”