"It’s amazing to be fighting in the UFC, but more than that, to be
fighting for the world title on Pay-Per-View is such an amazing
opportunity." - Miesha Tate 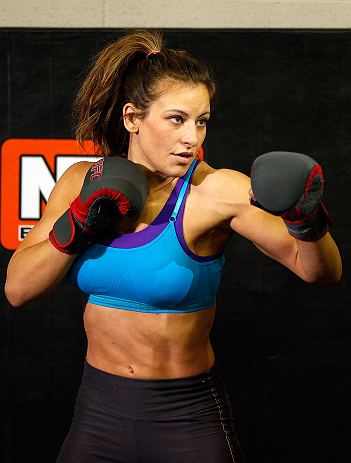 Revenge can be a very powerful form of motivation.

What initially starts out as an impulse slowly takes over the thought process, and once it obtains a sense of urgency, the road to obsession is not too far away. For all the things Miesha Tate wanted for herself - and on a grander scale the sport of women’s MMA - the aftermath of her loss to Ronda Rousey was the perfect environment for the seeds of vengeance to grow.

And honestly who could blame her? Where Tate had been outspoken about her wishes to see women receive the proper amount of respect in the sport even though the grand stage of the UFC wouldn’t have them, her rival had single-handedly knocked down those doors.

UFC President Dana White had long said women would never compete inside the Octagon, but that all changed with Rousey, and the ever-vocal White wasn’t shy in charging the former Olympic judoka as the reason. The last woman to hold the Strikeforce bantamweight title was absolutely the catalyst for women being brought over to the UFC, and everything outside of Rousey’s star power appeared to be exactly that…everything else.

Where her rival’s ascension ate at her, it paled in comparison to coming out on the losing end of their fight. The Washington native is a competitor through and through, and taking the loss when the top two 135-pound women in MMA collided in Columbus, Ohio, nipped at her brain on the regular. The proudest moment of her fighting career came just eight months earlier when she pulled off a submission finish over Marloes Coenen - a fighter she truly looked up to in the sport - and suddenly she was on the opposite end of the spectrum.

Her belt was gone. Her elbow was jacked because of her initial refusal to tap to Rousey’s signature armbar, and she had to sit on the sidelines and watch as Rousey’s profile exploded. While Tate could have set about a spiral of obsessive behavior in her quest to regain her place in the sport, she did the polar opposite and let it all go.

And that is where things get truly interesting. Rather than her story being one of revenge or redemption, Tate’s reality couldn’t be further from those marks. Tate has come to realize she is more than a rivalry and refuses to allow their feud to define her. She’s one of the best fighters in the world at 135 pounds and she’s absolutely willing to prove her worth inside the cage.

“My career is not going to be determined off this one fight or this rivalry,” Tate said. “I’m not trying to put the weight of the world on my shoulders. I believe I’ve done enough thus far in my career to solidify a spot in the UFC, where my value as a competitor isn’t determined by this rivalry. I fully intend to go in there and take that belt on December 28 and go into 2014 as the champion. But, at the same time, I love this sport no matter what. > Watch: Miesha Tate, By the Numbers

“My goal going into this season of The Ultimate Fighter and this fight was to realize the truth that Ronda Rousey does not dictate Miesha Tate. Yes, I lost a fight to her once, but I think I grew a lot as both a fighter and a person. I just decided I was going to have fun with it and let go of the feelings of bitterness and anger I had towards her. I was going to be me no matter what.  I learned a hard lesson that when emotions get involved and there is so much negativity, it just wasn’t helpful for me. It’s not the way I compete at my best so I had to learn to put those emotions aside. That’s why I attempted to shake her hand after each fight. That’s why I kept my cool.”

In addition to her focus being locked in on personal evolution, she also came to understand how much freedom she found in releasing her previous mindset. Going into her first fight with Rousey, she was admittedly caught off guard by the brash presentation of her challenger. While 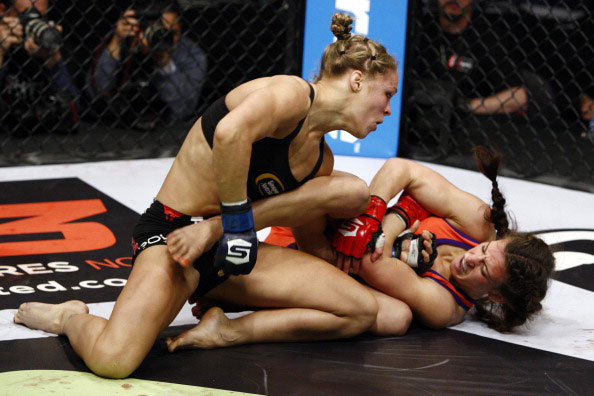 Tate did her best to keep her game face intact, the truth of the matter is Rousey’s plan to get under her skin and in her head was an effective. But those hooks have vanished and the change in Tate has been noticeable.

Not only by those who train with her, but also by the viewing public that tuned in to watch her coach opposite Rousey on the 18th season of The Ultimate Fighter. No matter how brash, no matter the intensity of the tantrum, Tate kept herself in check. Where a “double bird” flash or a mean-mugging from Rousey would put her immediately on the defensive in the past, those antics couldn’t even raise the blood pressure of the new version of Tate.

“It made me a stronger person the same way being the bigger person when she flips me off makes me. I think that’s the harder choice because it’s easy to lash out, but it’s harder to keep your cool and take the high road. People think that’s me being fake, but I’m not going to give her the satisfaction of pissing me off. > Watch: Miesha interviews with SHOOT Magazine

“She doesn’t get to do that,” Tate added emphatically. “She doesn’t get to make me angry. Yeah, she’s Ronda and she is going to do whatever she wants, but she doesn’t get to dictate how I feel. She says she’s being “real” but in my opinion she’s a real bitch. That’s what I think. She uses this being real thing as an excuse to stomp her feet and act like a brat. If people think that is being real then I would rather be fake. She tried all her antics on me during the show and it made her angry that she doesn’t have that emotional control on me like she did before.”

While the public’s opinion turned on the champion in a big way over the course of the season, their allegiance appeared to sway to Tate’s side of the table. And that’s where another element of their upcoming matchup at UFC 168 this Saturday took yet another interesting turn.

If Tate has taken Rousey’s power to affect her mental state out of the equation, then their rematch in Las Vegas is stripped down to nothing more than a physical contest between two game fighters. Granted, Rousey is a former medal winner in the Olympics and has an incredible grappling pedigree to rely on, but those are physical aspects that can be game planned for. Tate is no slouch in any regard of mixed martial arts, and is heralded as one of the most well-rounded fighters currently competing in WMMA.

The fight is a matchup between the best of the best at 135 pounds in women’s MMA and that is the fight Tate is expecting. She’s over the circus that surrounds all things Rousey and believes the fans are starting to see a true reflection of the person she’ll be sharing the cage with in Las Vegas.

“I think people have finally gotten to see both sides of the story now, and have been able to see both of our personalities,” Tate said. “I think people have had kind of a rude awakening as far as she goes. For the longest time I thought people didn’t understand the reason it was damn near impossible for me to get along with Ronda. She has even admitted it herself that she is the one who started it. I didn’t have a problem with her. When I first saw her fight I thought this chick looks pretty legit. But it was the way she called me out and the way she was so disrespectful before I had even met her that really turned me off to her.”  > Watch: Miesha Tate's Pre-Fight Interview 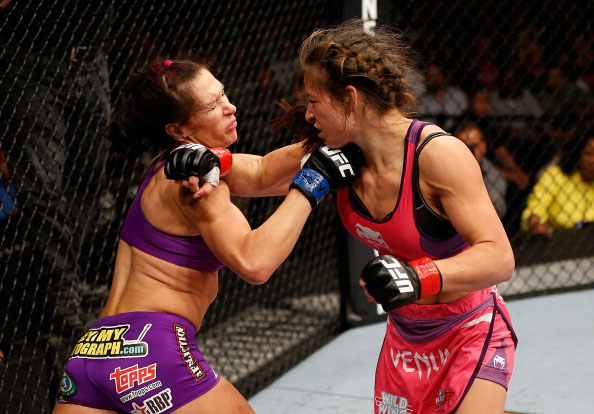 Tate is confident in what she can do when the cage door closes, and is willing to put her skills up against any challenge inside the Octagon. While this fight will certainly come with additional elements and weighted storylines - one of the most heated rivalries in combat sports, journalists attempting to gauge the amount of bitterness she holds toward Rousey, etc. - her focus is broken down to the simplest form.

She is going to make that walk to the Octagon on Dec. 28 in an effort to become the UFC women’s bantamweight champion, and everything else is just that…everything else.

“This is something I didn’t even think would be a possibility for years,” Tate said. “The fact that it’s made its way around to me so quickly in a sense, I’m so thrilled and excited to have an opportunity like this. It’s amazing to be fighting in the UFC, but more than that, to be fighting for the world title on Pay-Per-View is such an amazing opportunity. It doesn’t get any bigger or better than this. I cannot wait to show the world the new and improved Miesha Tate.