“If I was ever going to fight anyone on their own turf it would be in Japan because the fans are extremely respectful and even if you beat one of their own they won't hold it against you.” - Miesha Tate 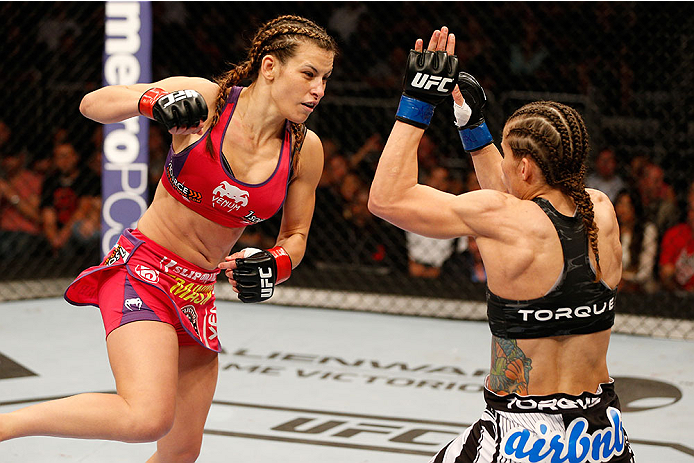 Miesha Tate will make history when she takes on undefeated Rin Nakai in the UFC’s first ever women’s bout in Japan on September 20th at Tokyo’s famed Saitama Super Arena.

But don’t think “Cupcake” will be in hostile territory in Nakai’s home country, where her opponent is Japan’s best known female fighter today.

“If I was ever going to fight anyone on their own turf it would be in Japan because the fans are extremely respectful, and even if you beat one of their own they won't hold it against you,” she said.

“The fans look at it as a respect thing. They respect that I'm coming from the U.S. to Japan to fight for them, and they respect both fighters who are willing to step into the ring and put on a great performance for them. Even though Rin is from Japan, I feel like I have a strong fan base over there. I've been there a few times and I've been very well received there. The true MMA fans who have been following the sport for a while will know who I am, and it's comforting to know I won't be just some unknown enemy.”

And if you are a true MMA fan, you know just how far women’s MMA has come, and that Miesha Tate has taken the full journey with the sport, experiencing the lows and the highs first hand.

“I started training in 2005 and had my first fight in 2006, so I really got my experience at the tail end of the hungry years, where women's MMA wasn't getting any love, and even when it did it was small peanuts,” Tate says. “I was the longest-signed woman fighter for Strikeforce, and when the UFC absorbed us I've had the opportunity to fight on the biggest stages. I fought on a card with Anderson Silva, which was the biggest card of the year, so I really got to experience both ends of the spectrum for women's MMA and it's been an incredible journey. It's something I can be thankful for. I couldn’t have picked a better time to enter MMA.”

Indeed, Miesha is a veteran of the sport, and if the ladies aren’t gunning for champion Ronda Rousey, they’re certainly gunning for Tate. Having recently signed with NASCAR great Kevin Harvick’s sports management company - something “Cowboy” Cerrone was the first to do - Tate has attracted big-name sponsors, and that means even more exposure for the popular bantamweight.

“I may not have the gold around my waist but I have become a target because I put on great fights and the girls want to have the opportunity to have that exposure,” she said. “I have built a name and a brand around myself and I've become a stepping stone for some, but the way I look at it, if you want to come and try to take what I've worked so hard for, then come and try.”

In Nakai, Tate faces a very strong judoka with striking good enough to close the distance for a takedown, where she is content to ride mount until she can work an armbar, kimura or some form of ground-and-pound attack. It’s something Tate has seen before, and frankly, the Xtreme Couture fighter is not too concerned.

“Being in there with Ronda, she's on a whole other level,” Tate says. “That experience has been invaluable because of the things I've learned from fighting with her, so I feel like nobody has judo that I should be afraid of. It gives me confidence that she hasn't fought the level of competition I have.”

This fight is risky for Tate, because Rin is little known outside of Japan. A win for Nakai over the second best known active women’s fighter in the world today would put her on the map; however, a win for Tate doesn’t do too much for her own position in the quest for a third bout against Rousey.

“It’s not really fair to Rin because she has a stellar record and is undefeated,” she said. “But it is the reality that she’s not very well known, and if I beat her the majority of fans will say ‘who?’ Meanwhile, if she beats me, people will think ‘Wow, she came out of nowhere.’ It’s kind of a rough way to look at it but it is what it is. How many times has Ronda had to fight someone who doesn’t bring much to the table in terms of a win? It’s just the position you’re in when you’re the top dogs in the sport.”

But that doesn’t mean Miesha is looking past Rin at all. She has moved full-time to Las Vegas, where she’s in the process of buying a home, and she trains under the watchful eye of her head MMA coach Robert Follis.

“Rob is great at strategizing against an opponent,” she said. “He’s constantly studying and bringing something new to me every day.”

And while the Japanese fans may not be entirely against her come fight night, conventional wisdom is that judges tend to lean toward their hometown favorite in a close fight, but Tate doesn’t think the pressure for a finish is too dire.

“I don't need a finish but I want a finish,” she said. “A finish is not going to make or break me; I want to put on an entertaining fight for the fans. It's a pretty historic fight for women's mixed martial arts because Japan hasn't really had the opportunity to have exposure to women's MMA on a mass level, at least on their home turf. I want to go there and be in the first high-profile UFC-supported female fight, and I want to make sure women's MMA is represented right.”