"I’m hungry, and I’m determined, and I know I want this more than she does and I know I’m working harder than she is." - Miesha Tate 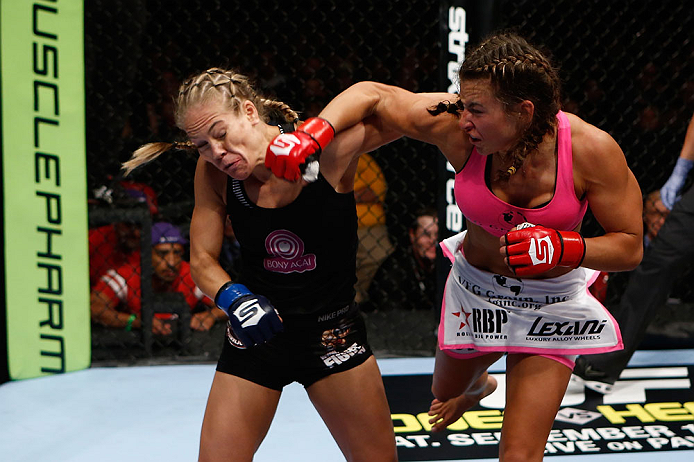 Miesha Tate isn’t a fighter accustomed to talking in clichés. If you ask her a question, she’ll give you an honest answer, and that honesty applies to her fighting style as well. There are no flying techniques, no spins, no flips, just whatever a former wrestler needs to get the job done when the door shuts and it’s time to compete.

That honesty is appreciated, so when queried about her visit to The MMA Lab gym in Arizona, Washington State’s Tate could not tell a lie.

“I wanted to train somewhere with warmer weather,” she laughed. “I hate training in the cold, to be honest, and I never feel as motivated. I like to run outside and do a lot of physical activities. Being outdoors makes me feel healthier and happier during my training camps, and I’m getting a lot of sunshine. So honestly, a big reason was that in itself.”

The other reasons? Well, some high-quality training partners led by a guy named Benson.

“Other than that (the weather) I just had more training partners,” she said. “Plus, (UFC lightweight champion) Ben Henderson and I both grew up in the same hometown and he’s just a real good guy. He’s a cool person and he had always offered for me to come and train, so I figured what the heck. He’s got a lot going for him, he’s the champ, he’s got a great mindset, so I decided to come and check it out.”

The work with Henderson and the rest of the MMA Lab team couldn’t have come at a better time for the 26-year-old Tate, who will make her Octagon debut this Saturday against Cat Zingano. It’s only the second women’s fight in UFC history, and the winner of this Las Vegas bout will face the winner of the first female fight – Ronda Rousey – for Rousey’s UFC women’s bantamweight crown.

“It did come as a little bit of a surprise,” said Tate, who lost her Strikeforce title to Rousey in March of 2012. “I didn’t expect the title shot to come quite so soon, but nevertheless I’m really excited about it, and it just really added even more motivation to an already motivated Miesha Tate. I’m excited, everybody knows that I’ve wanted that fight (with Rousey) since the moment I lost the title, and I’m ready for it. I’m stoked and certainly not gonna let Cat Zingano take that away from me.”

That’s obviously more than enough incentive for both fighters. But there’s more, as the winner of Tate-Zingano will also coach against “Rowdy” Ronda on season 18 of The Ultimate Fighter. It’s a life and career altering series of events for either Tate or Zingano, but despite everything that’s on the line, Tate is keeping her eye on Saturday night.

That type of focus only comes with years of experience, and despite women’s MMA being new to the Octagon, it’s not new to the sport of mixed martial arts, where Tate has been competing since 2007. Tate fought twice on that first night in Evansville, Indiana, decisioning Jan Finney and getting knocked out by Kaitlin Young, but since then, she’s settled in among the elite in WMMA, most notably going 5-2 in Strikeforce, where she won the organization’s bantamweight title in 2011 with a submission of Marloes Coenen. Now she’s on the hunt to take a title once again, this time from the person who dethroned her in Strikeforce. But as she so aptly put it, there’s no Rousey rematch if she doesn’t beat Zingano, a fellow veteran who Tate respects, but that she doesn’t believe has the tools to beat her. So from now until the final bell tolls or the referee stops the fight on Saturday, nothing else matters.

And Miesha Tate has her game face on already.

“She’s a super tough girl and seems like a nice person and everything, but I definitely don’t think that she’s ready for this opportunity,” said Tate of her opponent. “I just know that this is my destiny; it’s not hers. I’m the one who’s meant to coach against Ronda Rousey. We have a tried and true honest rivalry and Cat doesn’t. She (Zingano) is married, she’s 30, she has a kid, and I kind of think that she’s maybe contemplating retirement, but that this came at a good time for her and she wanted to take advantage of it. That’s all fine and dandy, but I’m here, I’m hungry, and I’m determined, and I know I want this more than she does and I know I’m working harder than she is. In my mind there’s no question that this is my fight to win.”