Miesha Tate: A Cupcake in Nickname Only 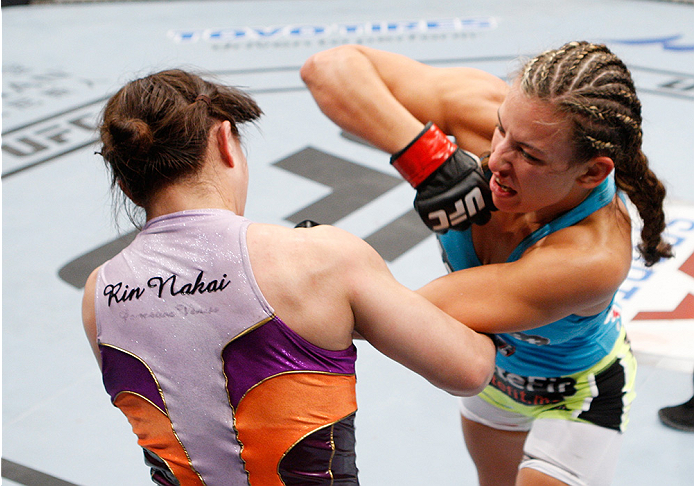 When it comes to nicknames, Miesha Tate has one of the more interesting ones in the world of women’s MMA, but while some of her reason for choosing the moniker “Cupcake” has to do with her love for baking, just as much comes from another love: proving people wrong.

“When I first started fighting, it would really bother me that people in general, and not just my opponents, would take one look at me when I got into the Octagon or at weigh-ins like ‘oh, that girl’s gonna get her ass kicked, for sure,’” Tate explains. “It used to really, really irk me that people would look at me and say that I couldn’t fight and ‘oh, she’s gonna get handled by this other girl that looks more like a dude.’ (Laughs) And then I would go out there and win. You can’t judge a book by its cover, and that’s where the nickname ‘Cupcake’ came into play. I might look soft or feminine on the outside, but that has nothing to do with what I’m made up with on the inside.”

In other words, this “Cupcake” can hurt you, and while the nickname is a jab at detractors who think a young lady who is easy on the eyes can’t fight, at this point in Tate’s seven-plus year pro career, any detractors would have to be those simply showing up late to the game.

That doesn’t keep the Tacoma, Washington native from pushing just as hard as ever though. Currently ranked number two in the world at 135 pounds, the former Strikeforce champion and UFC title challenger has accomplished enough to perhaps sit on her laurels and take more analyst gigs on television while starting to prepare for life after fighting, but at 28, she feels that now is the time to strike if she’s going to get another crack at championship gold in the Octagon.

“I went into this sport because I love it,” she said. “I did it for an entire year for free. I fought my first six fights for free and it actually cost me money to do it, but the passion and drive and love that I have for this sport is still there. And I know I won’t be able to do it forever, so I want to make the most of it while I can now. I want to be the best, and I still have some goals I want to accomplish inside the sport before I retire. So as more time goes by, I actually feel like I get more motivated and I want to push harder because it’s a race against the clock. Sports careers are relatively short-lived. I’m 28, I’m not getting any younger, so if I want to make those things happen and be able to hit those goals inside the sport, now is the time, I gotta go.”

It’s why instead of sitting back and picking off some folks in the lower reaches of the top 15, Tate agreed to a UFC 183 fight with the number three-ranked Sara McMann this Saturday night in Las Vegas. It’s not because it’s a gimme fight or because McMann matches up well with her; it’s just the opposite for the ultra-competitive Tate.

“I think stylistically it (the McMann fight) presents a lot of problems for me,” she said. “It’s a very difficult matchup, but those are the kind of fights that when you win, they’re much more rewarding than the fights that maybe you’re supposed to win. I know that this is a very even fight. She has her strengths and I have my strengths and if we both come in there putting a hundred percent on the line, it could be anyone’s fight. That’s a scary concept, but I don’t go in there to fight to beat people I already know I can beat. I want to really test myself and push myself, and it’s more rewarding when you beat someone who you know is a legitimate opponent and a legitimate contender. She (McMann) is ranked number three in the world, she took a Silver medal in the Olympics in 2004 and beating her puts me a lot closer to that goal of fighting for the belt one more time. I have to take on people of Sara McMann’s caliber or I’ll never have the opportunity to prove that I should be in there again. It’s the only way. I have to fight and beat all the best girls and I have to ward off all the number one contenders until I am the number one contender again.”

The last fighter to have that attitude was former lightweight boss Benson Henderson. “Smooth” was willing to fight anyone and everyone at 155 pounds in order to get another crack at the man who beat him for the belt, Anthony Pettis. And while there have been some bumps in the road, no one has lost an ounce of respect for Henderson, simply because he’s willing to lay it all on the line every time out. Tate is no different, and even after bouncing back from losses to current bantamweight champion Ronda Rousey and number one contender Cat Zingano with victories over Liz Carmouche and Rin Nakai, Tate wants to pick off anyone charging up the ladder before they get to the top.

That game plan does lead to an interesting question though. A third fight with Rousey doesn’t seem to be on the horizon, but a rematch with Zingano would probably be an easy sell sooner rather than later. So will Tate be cheering for “Alpha Cat” when she meets Rousey at UFC 184 next month?

“Honestly, I’m torn,” Tate said. “I know that if Cat Zingano did beat Ronda Rousey that it would get me a title shot more quickly. I feel like a lot of people think the fight with Cat and I was unfinished business. I won the first two rounds and the stoppage in the third round was questionable at best. So there’s definitely room for a rematch there and it’s something I’ve been waiting for and that I want again. But at the same time, I really like fighting Ronda, and I definitely think that the third time could definitely be the charm. I think I’ve figured out a better balance and I figured out more things that I need to do and, regardless, the fans love that fight and it’s always exciting. She always pulls the most out of me, so as much as I dislike her in some ways, I’m very thankful that she is a part of my career, because she makes me a better fighter, and that is my main goal – to be a better person, to be a better fighter, and I think she motivates me to do both.”

Cupcake, huh? It’s catchy, but actions speak louder than nicknames, and if Miesha Tate wants to take on an Olympic Silver medalist and then prefer to fight someone who beat her twice in a world title fight, she’s no “Cupcake.” No way.