"I definitely don’t feel like I’m done. Now it’s just a matter of getting
back in there and showing the world that I have a lot more to me and
that I can continue to improve." - Miesha Tate 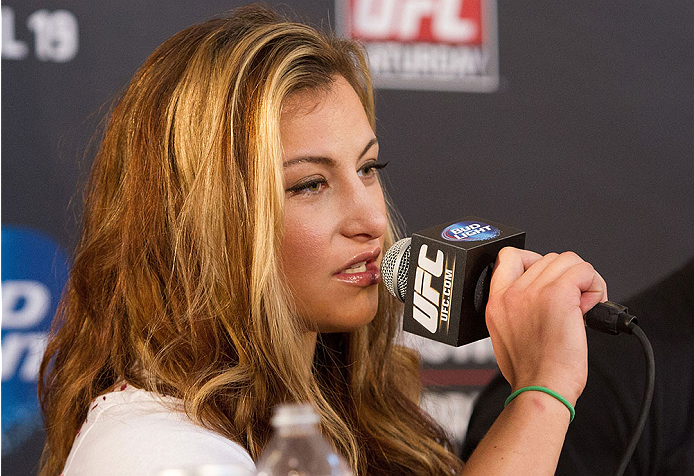 The Ronda Rousey chapter is over for Miesha Tate. For now. After two losses to the current UFC women’s bantamweight champion, Tate is happy to take on a fighter who is still at the top of the division in Liz Carmouche, but one that won’t leave her hanging on a handshake when their Saturday bout is over, no matter the outcome.

“It’s been much more relaxed, and I’m able to just focus on what I need to do inside the gym to win the fight and that’s been awesome,” said Tate of fighting Carmouche. “It’s really nice to fight someone who has the same idea about sportsmanship and a positive attitude similar to myself, and she’s very respectful. She’s the complete opposite of Ronda. I get along with her, I get along with her coaches, her management, and anyone I’ve met who had something to do with Liz Carmouche has been awesome. So it’s nice and definitely a change of pace.”

It’s a change of pace from what was the fiercest rivalry in women’s MMA, one that lasted from Tate’s reign as Strikeforce champion through The Ultimate Fighter, and that ended at UFC 168 last December with Rousey’s second armbar submission win. Tate had lost before over the course of her nearly seven-year pro career, but none stung like the defeats to Rousey, especially the last one, which was punctuated by Rousey’s refusal to shake Tate’s hand after the fight. Suffice to say that these two probably won’t be sitting in rocking chairs at 75 years old reminiscing about the good ol’ days. In fact, if they did run into each other at that age, they would probably try to fight.

“If we were ever stuck in a nursing home together, that’s exactly what would happen.”

So no ‘let bygones be bygones?’

“I’m not even hopeful for it, and I really could absolutely care less,” she said. “I don’t want to be her friend.”

And though she constantly gets reminded of Rousey by annoying inquisitors (guilty as charged), she admits that while this segment of her career is closed at the moment, she hasn’t given up hope on one day getting a championship belt around her waist, and whether it’s Rousey or someone else holding it, that really doesn’t matter to her.

“I don’t, for some reason, feel like it’s done,” said Tate of her rivalry with “Rowdy” Ronda. “I feel like it’s done for now. But I still have high hopes that if I can string two or three more wins together and really beat top opponents like Liz Carmouche and whoever is ranked at the top at that time, and show the fans what they need to see to prove that I can beat Ronda in those fights, then there’s a chance that I can prove myself once again as the number one contender and get a title shot. And whether Ronda still holds the belt or not, it’s not as important to me as winning the UFC championship at one point in my life. It’s not as big of a goal to beat Ronda as it is to be the champion. That’s always been the big goal, and beating Ronda would be the icing on the cake, but we’ll see how it plays out.”

First, she has to beat Carmouche and snap the first two-fight losing streak of her career. Sure, she may be the best 0-2 fighter in the UFC, but at some point she needs to get back on track, and there’s no better time than right now.

“No matter how many great things or positive things that you can pick out of a fight, when you lose you lose, and that’s what goes on your record and that’s what people remember and that’s what it says on the paper - you lost,” said Tate. “So unless you’re a huge fan and you remember the fight, chances are that that’s all she wrote – you lost. That’s disheartening and it’s very frustrating because victory is what I think ultimately feeds a fighter’s soul. So it’s a little bit like starving to death when you work so hard for something and you don’t get that reward at the end. That’s hard, so it’s a little more challenging to muster up the energy to do it again, but you just have to turn that into motivation, because if you sit there stagnant, that’s all you’re going to continue to do – starve. The only way to feed yourself is to do it again and keep trying until you finally get that fulfillment and that victory.”

And after two losses, you start re-evaluating everything, including your choice of entrance music. For the Rousey rematch, Tate chose Katy Perry’s “Roar” and it was a big hit with fans and apparently with “Cupcake” herself, as she sung the lyrics on the way to the Octagon.

These days, not so much.

“I like the song, but now it’s kind of bittersweet because every time I think of it I think of a loss to Ronda, so it’s a little hard for me to hear that song and still feel as emotionally charged about it as I did in the lead-up to the fight,” said Tate, who is at least content in knowing that in two days, she gets a chance to right her ship in a co-main event fight that will be seen nationally on FOX.

“I would love to get a really awesome quick first round finish, but in my gut, I don’t think it’s going to end in the first round; I think it’s gonna be a second or third round fight, and possibly even go to a decision, but I believe I’ll be able to finish the fight,” she said. “But the thing about Liz is that she’s a very tenacious fighter and she’s really durable. She’s not someone that’s easy to put away. I’ve never seen her get dropped by a punch or a body shot. She can really stick in there, and she’s got a great mindset and great heart, and she’s well-rounded. I also feel like she improves with every fight. She’s one of those few fighters that I can noticeably tell that she’s improved, and that makes her dangerous because you don’t really know what to expect.”

Tate wants to bring that danger back into the Octagon, and though she will be reminded of the Rousey losses at every turn until she wins again, that’s all just media stuff. In her mind, she’s already moved on.

“Losing is not something that you ever plan on, but when it happens you’ve got to choose whether you let that rule you and dictate the rest of your career or are you going to put it in the past as best as possible and stay optimistic and learn from it,” she said. “I chose the latter and to move forward because I definitely don’t feel like I’m done. Now it’s just a matter of getting back in there and showing the world that I have a lot more to me and that I can continue to improve.”