Mickey Gall Is Ready For The Best Mike Perry

10 months of waiting to get back in the Octagon has made Mickey Gall more hungry to win than ever and he's ready to unleash his best on Mike "Platinum" Perry at UFC Vegas 4.
By Thomas Gerbasi, on Twitter: @TGerbasi • Jun. 23, 2020

Until the words come out of his mouth to remind you, it’s easy to forget that Mickey Gall had only one pro fight before he fought in the Octagon for the first time in 2016.

That means a lot of growing up in public while learning on the job at the highest level of the sport. Yet despite the ups and downs that followed that first win over Mike Jackson in February 2016, Gall is still here, still learning, and more ambitious than ever heading into his eighth UFC bout against Mike Perry this Saturday.

“I think everyone's gonna be in a whole lot of trouble for the next ten years,” said Gall. “Every day, I'm getting myself better. Every week, every month I'm having incremental growth. And fortunately, I've been forced to. I got into the UFC as a 23-year-old 1-0 pro. I know the skill level around me, I know who my competition is, and I'm starting to exceed all that.”

He hasn’t done it alone, and he’s the first to admit it. From early days training with fellow New Jersey native Jim Miller and a spell in Montreal at Tristar to work in Los Angeles with Yves Edwards and Joe Schilling, Gall has had an all-star array of coaches and training partners in addition to his longtime coach David Adiv. Most recently, the 28-year-old worked in Ohio with the trio of Mark Coleman, Matt Brown and Dorian Price, with Muay Thai ace Price making the trip with him to Jersey and then to Vegas in preparation for Perry.

So what does Gall take away from working with folks like that?

“Man, how much time ya got,” he laughs. “A lot. I learn so much from all these guys and every day I'm learning something. I think it's absolutely what I should be doing because my job is to get as good as I can as fast as I can. I'm fortunate to be able to mix it up with people that I look up to and have looked up to from my early years and get to learn from them. It's amazing, it's exactly what I think I'm supposed to be doing and exactly what I want to be doing.”

This weekend, he gets the chance to build on his most recent win over Salim Touahri last August against the unpredictable, but always entertaining, Perry, who is looking to snap a two-fight skid at the UFC Apex.

“I say I'm a low-key fan of Mike Perry,” said Gall. “I get excited when he's gonna fight because he brings the fight, he brings the violence. I also see a guy who has talent, but who wants to intimidate people and scare them, and he's not scaring anyone over here. I got respect for him, I respect his power, I respect that he's gonna come to fight and I do think he's a real fighter, but I'm more of a martial artist, I'm levels above him and if he spends 15 minutes in that little cage with me, I'm gonna find a way to take him out.”

As for the inevitable trash talk or antics “Platinum Mike” will come up with before fight day, Gall isn’t playing along. 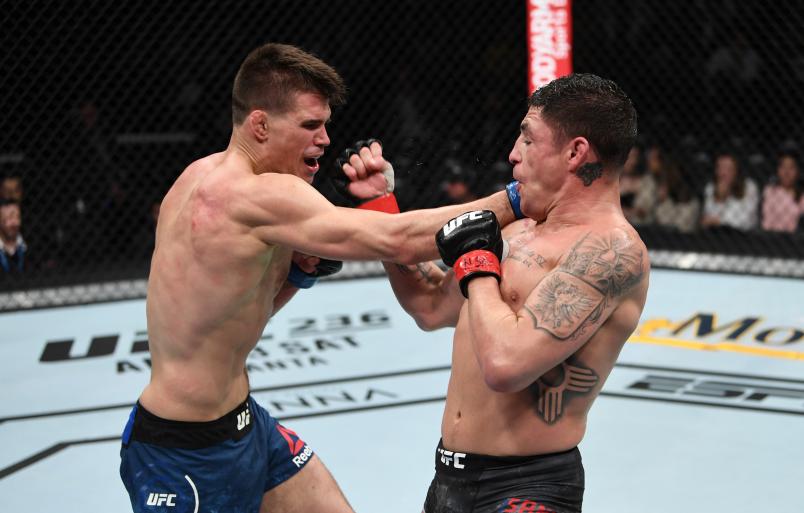 “I'm not really paying attention to it much,” he said. “I'm in the gym training all day and I'm doing the right things. I don't have the energy to flick through social media. I'm too busy running and lifting and fighting. I'm worried about me. I'm gonna expect the biggest, baddest, toughest Mike Perry we've ever seen. And I know me at my best takes out him at his best. I know that.”

The confidence is clear. And after 10 months of waiting, Gall can’t wait to put his latest set of lessons to work and get that feeling he’s missed.

“It’s that drug of winning,” he said. “You put in all the blood, sweat and tears and then you get to see the finished product. You get to get in there and get that sense of relief, that sense of accomplishment. I know Mike's a savage. He's a brawler, but I'm a killer. (On Saturday) I'm gonna be a cool, calm, collected killer.”