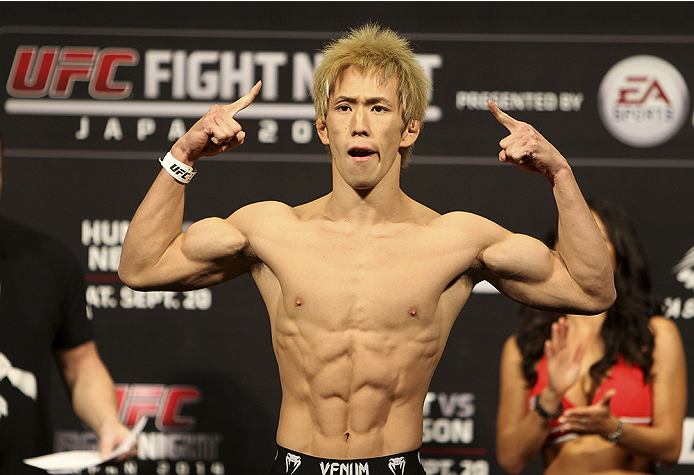 For many fighters in the same situation as Michinori Tanaka, 2015 would be described as a lost year. The Kanagawa native decided to use it as something else.

On the shelf for nine months following his UFC debut against Kyung Ho Kang in September of 2014 after failing his post-fight drug test for ephedrine and pseudoephedrine, both of which came from over-the-counter allergy medication that he took, Tanaka decided that even if he wasn’t fighting, he was going to be doing everything in his power to get better.

“Since my loss to Kyung (Ho Kang), my current Team Alpha Male Japan teammates and I went up to Sacramento to train with fighters like Urijah (Faber), Chad (Mendes), Joseph (Benavidez), TJ (Dillashaw - at the time), Cody (Garbrandt), Lance (Palmer) and many other talented fighters,” Tanaka said.

The trip to northern California came after Tanaka officially joined the Japanese affiliate of the Team Alpha Male squad in January, giving the highly touted bantamweight prospect the foundation he needed to take him to the next level in his UFC career.

“In January of 2015, myself and two other fighters (Teruto Ishihara, Yusaku Nakamura) joined TAM Japan,” he said. “I was not part of a team before this, so having teammates that I can trust has helped me tremendously. They have been helping me hone my MMA skills and help me get ready for this upcoming fight.”

Back in action against veteran Joe Soto this Saturday in Las Vegas, Tanaka is entering the most pivotal bout of his young career, and it’s important for so many reasons.

First, he’s competing in the fight capital of the world for the first time, and it’s his United States debut as well. “As a fighter, fighting in the MGM (Grand Garden) Arena is definitely one of my dreams,” Tanaka said.

Second, he’s facing the most seasoned competitor he’s ever met in MMA, saying of his opponent, “I have not fought a fighter with well-rounded MMA skills like Soto, so I am very excited to see how the fight plays out.”

And finally, the 25-year-old is returning after suffering the first loss of his 11-fight pro career. To some, that might be a daunting prospect as a young fighter tries to battle the doubts that come into his head after losing, but that’s not the case with Tanaka.

“It only took me only a day to get over the fight and by the next day, I was already thinking about what I can do to become a better fighter,” he said. “Two weeks after the fight I flew up to Sacramento to train with Team Alpha Male.”

And truth be told, if you’re going to lose a fight, losing it in a Fight of the Night battle like Tanaka did with Kang is the only way to go. Not that he’s happy with the end result.

“During the fight I lost my cool and I think that is what led to my loss. I definitely learned to relax and be more patient since that fight.”

It’s hard to truly analyze the trajectory of a fighter’s UFC career after just one fight. But Tanaka’s performance against Kang and his previous ten wins do place him in a position where he can join the likes of flyweight contender Kyoji Horiguchi as the kind of fighter that can lead a new wave of Japanese fighters to the top of the rankings and perhaps even to a world title. He’s fine with such expectations being placed on his shoulders.

Tanaka believes that the sport is growing again in his home country, good news for fans that always looked to the Land of Rising Sun as a hotbed of MMA.

“Ever since PRIDE went out of business, MMA’s popularity in Japan has dropped, but since this year, I believe it is getting popular again,” he said.

That’s the big picture. For the here and now, Tanaka isn’t concerned with title shots and spearheading a new MMA movement at home. He just wants to fight again.

“It has been over a year since my last fight with the UFC and my fighting style has changed a lot,” he said. “The fans should expect a new Michinori Tanaka in 2016.”