Michelle Waterson's Excursion Outside The Octagon

UFC Strawweight Contender Michelle Waterson Took Some Time Away From The Octagon, Finding Friendship And Reigniting Her Passion For The Sport In The Process
By Thomas Gerbasi, on Twitter @TGerbasi • Jan. 27, 2022

In terms of her career as a UFC strawweight contender, 2021 was a one and done year for Michelle Waterson, with her one trip to the Octagon against Marina Rodriguez not even taking place at 115 pounds, but in the flyweight division.

But “The Karate Hottie” was far from idle. She even got some training in while filming Netflix’ “Havoc” in Wales.

“I didn't know this about him before, but he is a devout jiu-jitsu student, so while I was out there, I got some really, really good training with him, and his stunt double Jacob (Tomuri) is also a jiu-jitsu practitioner,” said Waterson. “These guys are serious martial artists, so in between the times when we were shooting, we were training.”

And when they weren’t training, they were filming an action movie that brought the stars out to the UK.

“You've got Tom Hardy, Forrest Whitaker, Luis Guzman, Justin Cornwell, Jessie Mei Li,” she said. It's an amazing cast and I learned so much from all of them. It was a great experience.”

This may be around the time fight fans start to get a little nervous, but Waterson makes it clear that she is far from done when it comes to competing in the Octagon.

Relive All Of Waterson's Fights On UFC Fight Pass

“I learned a lot (during filming), but I've still got things to do in the fight world, absolutely,” she said. “Being away from the sport lit a fire in my heart and sometimes you don't realize what you have until it's gone. And being away from it made me realize how good of a life it was to have the ability to dictate my time and to train and do what I love. So coming back from the UK, I was invigorated to learn and continue to grow.”

And to get into a fistfight. On March 26, Waterson gets her wish when she returns to 115 pounds to put her No.8-ranking on the line against No.9-ranked Amanda Ribas at Nationwide Arena in Columbus, Ohio. It’s an important fight for both as they look to get into the race for a shot at the title held by Rose Namajunas, but the 36-year-old Waterson is only concerned with Ribas, and not the MMA math equations that can lead her to a rematch with “Thug Rose.” 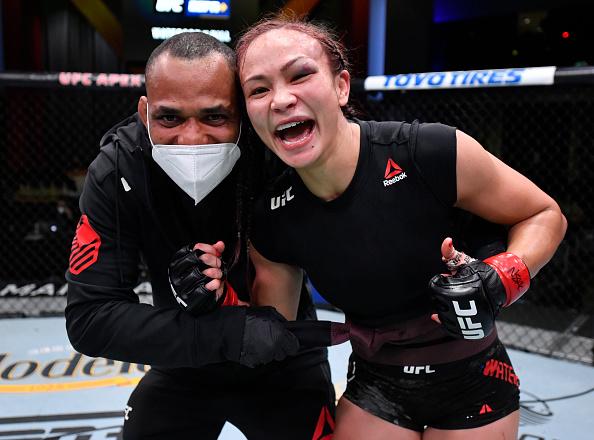 Michelle Waterson reacts after receiving her brown belt in Brazilian jiu-jitsu following her victory over Angela Hill in a strawweight fight during the UFC Fight Night event at UFC APEX on September 12, 2020 in Las Vegas, Nevada. (Photo by Jeff Bottari/Zu

“When you take yourself out of the present moment and start looking at that, that's having a great analytical mind, and when you're in your analytical mind, you're not able to react, you're not able to fight, and you're not able to get in the zone,” she said. “Obviously, those things play a factor because it is a career at the end of the day and you are providing income for your family, but I have to be in the moment. I have to be able to get in the zone so I show up and deal with what's in front of me, which is an opponent that's been training for me, and that's trying to climb up the ladder, so I gotta take care of that, first and foremost.”

That attitude has allowed New Mexico’s Waterson to not only make it to the top of the sport, but to stay there. In February, she will mark the 15-year anniversary of her pro debut, and that’s a string of longevity that is something to be proud of.

“That's insane,” she laughs. “You know, it's funny because I haven't looked at it for the 15 years, but I did the 10-year challenge and I kind of looked back - at this point 10 years ago, my daughter was just born and I was getting my body back into shape to pursue my dream. It was an amazing time, and a decade later, I'm still doing what I love and I'm still in my prime, and I'm loving life.”

And 15 years after decisioning Andrea Miller in a Ring of Fire show in 2007, she still checks those boxes. So what’s secret? 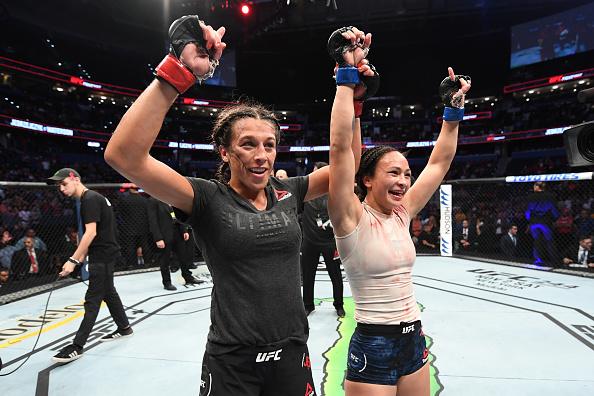 Joanna Jedrzejczyk of Poland and Michelle Waterson react after the conclusion of their women's strawweight bout during the UFC Fight Night event at Amalie Arena on October 12, 2019 in Tampa, Florida. (Photo by Josh Hedges/Zuffa LLC)

Joanna Jedrzejczyk of Poland and Michelle Waterson react after the conclusion of their women's strawweight bout during the UFC Fight Night event at Amalie Arena on October 12, 2019 in Tampa, Florida. (Photo by Josh Hedges/Zuffa LLC)

“I think staying hungry and continuing to evolve - that's the secret,” Waterson said. “That's the secret of life, honestly. You have to continue to seek different things that challenge you in different ways to grow.”

It doesn’t hurt having good people around her, like her family and good friends like another fighter with a pretty impressive run of longevity in combat sports, Holly Holm.

“She's been an amazing influence in my life and in my career, for sure,” said Waterson. “And one of the biggest reasons why is because she's never one to talk the talk. She's always a doer. She walks the walk. You kind of just follow her lead and she's one of the hardest working people I know. Her out-of-camp regimen is the majority of people's in-camp regimen. (Laughs) She is an absolute machine. But she's also very loving and compassionate and I can't say enough good things about her. And one thing about her is her determination to accomplish her goals. There's no stopping her. And even when she does accomplish a goal, there's always another mountain to climb.”

So what mountain awaits Michelle Waterson?

“At this point in my career, my biggest goal is to get in there and to finish my fights, and to show the things that I've learned and to show the evolution of my game,” she said. “I'm not so much worried about anybody else and what they're bringing to the table. I know what I have in my toolbox and I'm just gonna unleash the magic.”