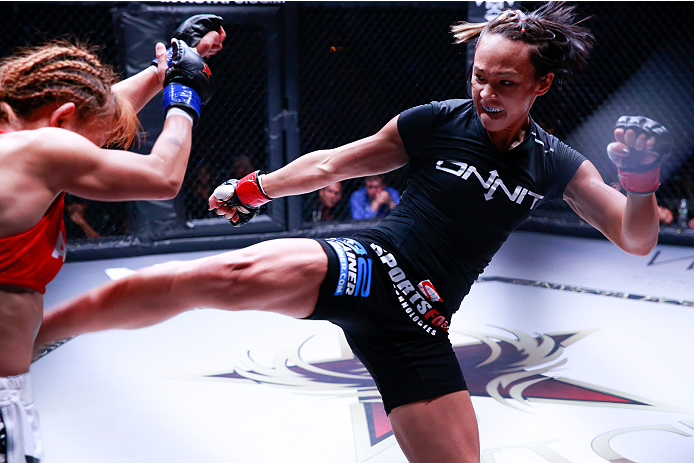 What does it mean to be the “face” of an organization?

Without a doubt, that charismatic cagefighter for Invicta FC is their current atomweight champion, Michelle Waterson.

“I really don’t like to think about it too much because then I start freaking out,” Waterson laughs. “But I think it’s cool. This is why I work so hard. When I first got into fighting I wanted to have a belt and, in doing so, it put a lot of pressure on me, but I think it’s good pressure that is forcing me to be a better fighter each day. I’m glad that I could be one of the faces of Invicta. It’s a great organization.”

Whether “The Karate Hottie” wants to truly admit it or not, she’s the go-to fighter to get fans or non-yet-fans alike excited about Invicta FC.

Since joining the company, Waterson has delivered three star-making, winning performances. Her Invicta FC debut was in October 2012 against Lacey Schuckman, which Waterson won by split decision, taking Fight of the Night honors in the process. Waterson followed that up with an incredible Fight of the Year candidate against The Ultimate Fighter 20’s Jessica Penne, which saw Waterson come from behind to secure an armbar in the fourth round to finish the then-atomweight champion.

Most recently in September, the 28-year-old entered into her first title defense against Japanese MMA veteran Yasuko Tamada with the swagger of a champion and proceeded to put on a one-sided striking clinic that would have made a prime Mirko Cro Cop blush.

“I wanted to show myself and everybody else that was participating and watching that I do deserve the championship belt,” Waterson states. “I wanted everyone to feel like, ‘Yeah, she is the champion.’ The fight with Jessica and I was so back and forth and I was a huge underdog. In the back of my mind, I thought there were people thinking, ‘Michelle got lucky with the submission.’ I wanted to kind of like set it in stone that I was the champ. I was really excited about my performance against Tamada. I was able to stay focused the entire time and do what I set out to do. All Japanese fighters have the heart of a samurai warrior and Tamada’s never lost a fight by being stopped. To be able to stop her was huge for me.”

The third round TKO via knees and punches improved Waterson’s pro record to 12-3, including 10 wins by stoppage. Fighting professionally since 2007, she is a veteran, but these Invicta FC appearances have been a breath of fresh and ferocious air for those familiar with Waterson’s career. Having trained striking since she was 10, her variety of stand-up techniques, especially her kicks, have always looked impressive, but they’ve never looked more punishing than they have in her past few fights. Waterson credits her husband Joshua Gomez, who was a former United States Air Force boxing champion.

“I think a big aspect of that is my husband,” Waterson reveals. “One of the things that he feels like I was lacking was my commitment to not only my punches, but my kicks. He’s telling me that I do have the strength to be powerful. I guess for a long time I didn’t believe it. I grew up doing point karate and competing in point sparring. A lot of it is tippy-tap, ‘tag - you’re it’ type sparring. To get out of that mindset took me a while. I think just having the confidence in myself to actually do it is the biggest thing. To have the confidence in my training and to let it go and see what happens.”

Not to mention, nowadays, Waterson is attacking with a mother’s strength.

The Colorado native’s near two-year sabbatical prior to 2012 was to give birth to her and her husband’s adorable daughter, Araya. Motherhood has given Waterson a more fervent focus and motivation to being the best she can be as she is not just fighting for herself - she’s kicking butt for Araya too.

“Being a mother, I want to be a role model,” Waterson affirms. “I feel like it’s important to lead by example. I want my daughter to see with her own eyes how hard I’m working. I want her to see how determination and hard work can actually allow you to make your dreams become a reality. Just by observing, she can see that and she can take that lesson into whatever she chooses to do in her life.”

On December 5th, live on UFC FIGHT PASS from the Arena Theater in Houston, Waterson will headline her third straight Invicta FC event as she defends the Invicta FC atomweight title against submission specialist Herica Tiburcio. With an 8-2 pro record, Brazil’s Tiburcio will be making her US and Invicta FC debut, riding a three-fight win streak that includes two armbar finishes. It’s an incredible opportunity for Tiburcio to shoot to the top and tangle with the division’s best with gold on the line.

For the current champ, Invicta FC 10 is Waterson’s latest chance to lead by example and show why both The Karate Hottie and Invicta FC are can’t misses for fight fans and possible soon-to-be fans.

“It’s a great card filled with great fighters and you should get yourself an early Christmas present and subscribe to UFC FIGHT PASS,” Waterson asserts. “Herica’s down to bang, but for the most part, she wants to take it to the ground. She really scrambles on the ground, she’s really active, and she’s always going for submissions. She’s not just a pressure grappler, she likes to finish. I’m excited to fight her. If she wants to take it to the ground then she’s going to have to work for it - I’m planning on standing with her.”