If you were hoping there was a feverish sibling rivalry between the Oleksiejczuk brothers, you would be mistaken.

“My brother is helping me a lot, I’m helping him a lot; we’re working together, supporting each other any way we can,” Michal Oleksiejczuk said through a translator in regards to his relationship with his younger brother, 22-year-old Cezary, who pushed his record to 9-2 with a victory in the middle of June. “We’re both developing — he’s improving his skills, I’m improving my skills, and it’s working great for us.

Having that kind of strong, familiar support is crucial for Oleksiejczuk at this time as the Polish competitor is set to embark on a new phase in his career.

After making his first eight UFC appearances and the majority of his fights to date in the light heavyweight division, the 27-year-old opted to switch weight classes following his March loss to Dustin Jacoby, departing for middleweight, where he meets Sam Alvey this weekend. 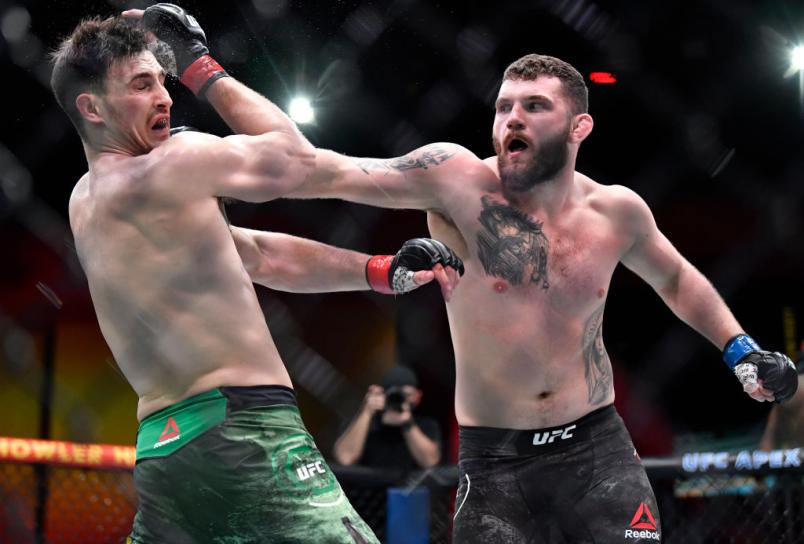 Michal Oleksiejczuk of Poland punches Modestas Bukauskas of Lithuania in their light heavyweight fight during the UFC 260 event at UFC APEX on March 27, 2021 in Las Vegas, Nevada. (Photo by Chris Unger/Zuffa LLC)

“I was fighting at light heavyweight as long as I was winning and doing well and I felt I could achieve a lot,” said Oleksiejczuk, who amassed a 4-3 record with one no contest verdict in his UFC light heavyweight starts. “But last fight against Dustin Jacoby was a fight where the winner would go to the rankings — I faced top-level competition and felt that physically, I’m not a light heavyweight, so that’s why I decided to move down.

“If I would have kept winning, I probably would have stayed at light heavyweight.”

The fight with Jacoby was competitive, with the streaking veteran earning scores of 29-28 across to the board to land on the happy side of the decision. Like his previous losses to Jimmy Crute and Ovince Saint Preux, the size and overall physicality of Jacoby was too great an obstacle for the dynamic, but undersized, Polish fighter to overcome.

“I feel really strong, and I don’t lose any speed or dynamic skill going down; I will be the same fighter, but facing smaller opponents than I’m used to. I feel like this is my weight class and great things will come for me at middleweight.”

In addition to changing weight classes, Oleksiejczuk also changed gyms following his most recent setback, connecting with the crew at Ankos MMA Poznan. 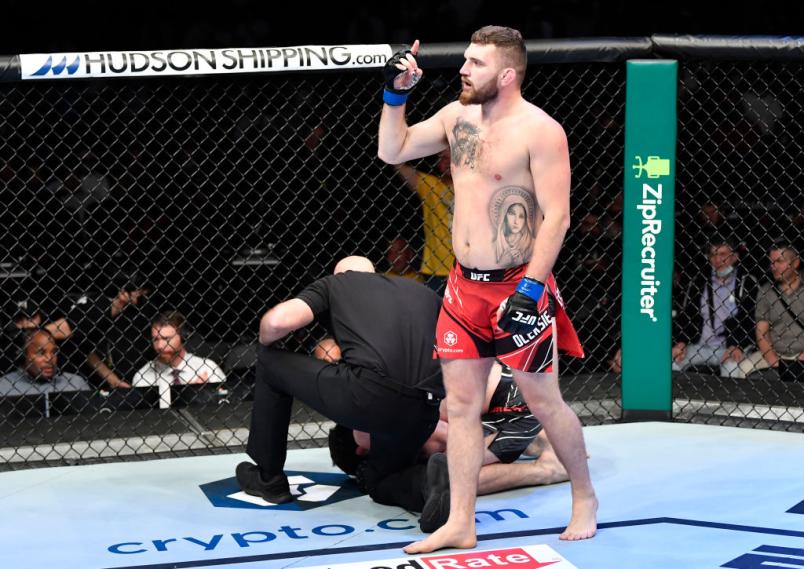 Michal Oleksiejczuk of Poland reacts after his knockout victory over Shamil Gamzatov of Russia in a light heavyweight fight during the UFC 267 event at Etihad Arena on October 30, 2021 in Yas Island, Abu Dhabi, United Arab Emirates. (Photo by Chris Unger/Zuffa LLC)

“The new gym is working really well for me; it’s one of the best gyms in Europe, filled with top fighters in many promotions, so I’m doing well,” said Oleksiezcjuk, who has earned three of his four UFC victories inside the distance, showcasing slick boxing and a penchant for body work. “I’ve got a ton of great sparring partners in my division — good wrestlers, good fighters — and I feel like I’ve made huge developments in that camp going into this fight.

“I felt I was not developing anymore, so I decided to change gyms,” he added. “Now, I feel like I’ve had a breakthrough in my career — the new gym, the new weight class.”

Oleksiejczuk’s first opportunity to compete in his new weight class and following the shift to a new gym comes Saturday, when he shares the Octagon with the 52-fight veteran Alvey.

Alvey enters this weekend’s clash with Oleksiejczuk on an eight-fight winless streak that began all the way back in the fall of 2018, but the results don’t tell the complete story.

While there have been clear setbacks, there have also been a pair of split decision losses — one to Ryan Spann, the other against Wellington Turman — that could have gone Alvey’s way, as well as a couple instances where opponents pulled out at the last minute, only to be replaced by a more dangerous foe. Such was the case in the 36-year-old veteran’s last appearance, where he went from initially facing Ian Heinisch to being paired off with Phil Hawes to facing Brendan Allen in an impromptu light heavyweight bout with five days’ notice.

But Oleksiejczuk isn’t paying any attention to Alvey’s struggles or what his opponent will bring to the Octagon this weekend, opting instead to focus on himself and make the most of this important debut showing in the middleweight division.

"This is a very important fight for me,” he said. “I’m looking forward to showing everyone I’m the new middleweight for my future opponents to worry about.

“I’m not looking at (Alvey’s) loss streak. He’s a tough guy, a strong fighter; a legendary veteran of the UFC, but I’m not looking at him as much — I’m looking at me and what I can show on Saturday, and I think I will show that I’m the new middleweight, the addition to the division that you have to look out for.”

Comfortable on the biggest stage in the sport and feeling like he’s found the right weight class, Oleksiejczuk has his sights set on beginning this new chapter of his career on Saturday and building a legacy for himself in the 185-pound weight class.

“My plan is to be the best in the world — to be UFC champion, to have that belt around my waist,” offered the Polish fighter. “I feel like this is the breakthrough and with the experience that I have, I’m looking forward to beating the top competition.

“I’m looking forward to facing better and better fighters until I will fight for a championship title,” he added. “I feel like this is my weight class and great things will come for me at middleweight.”