"I hit everybody. I’ve never had a
fight where I haven’t rocked my opponent. I will hit him, and I don’t
think he’s going to like it." - Michael McDonald 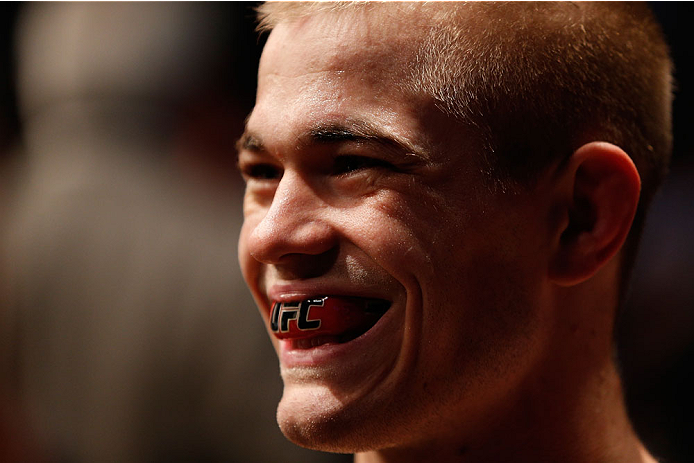 Without fail, Michael McDonald gets sick during training camp – he has for each of his last five bouts, and has already battled a three-day illness during his preparation for Saturday’s co-main event showdown with Urijah Faber on FOX.

“For about the last five fights, I’ve gotten sick every single fight, and this one, I’m over my sickness already, which is great,” explains the bantamweight contender. “It came a little bit earlier, and it’s always the exact same sickness with the exact same symptoms and the exact same time frame in regards to my fight, so it’s something that we’re going to do a little research on and see what’s going on with my body.

“It’s obviously not just a bug that I’m catching because it’s always the exact same symptoms, and they’re very, very unique, specific symptoms – it’s kind of weird. This fight it was very quick – it happened early, and it was over with in three days. I’m learning how to deal with it better, and hopefully in time, I’ll figure out how to completely fix the situation.”

Just addressing the issue openly is a step forward for McDonald.

Earlier in his career, the 22-year-old Modesto, California native worked to keep his symptoms and the bumps and bruises accrued along the way to fight night a secret, worried about what people would say if he sniffled and sneezed his way through an interview. > Watch: McDonald's Pre-Fight Interview

That’s how it was last February when McDonald made the trek to London, England to battle interim bantamweight champion Renan Barao, but it won’t be that way any longer. 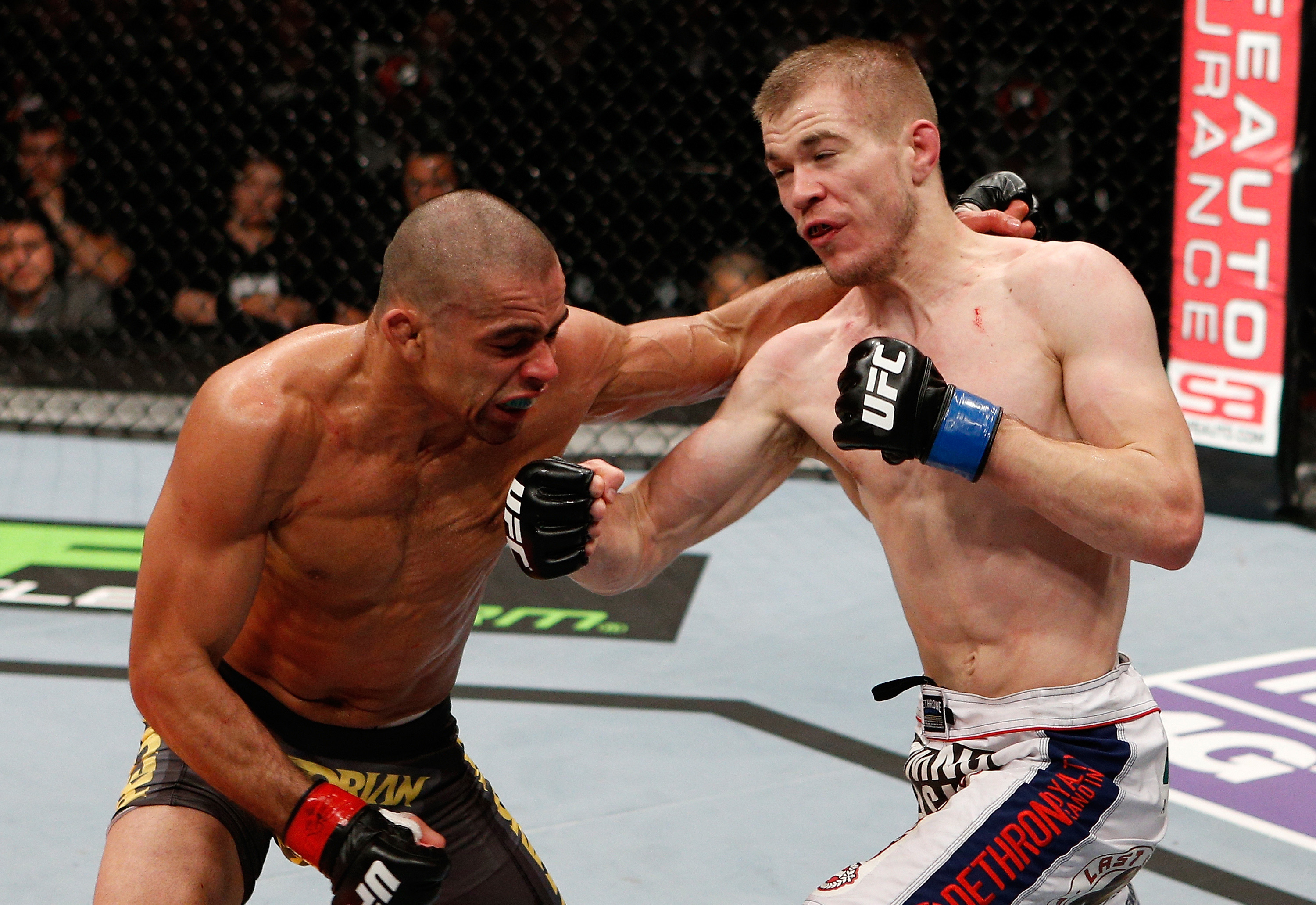 like, `This has never been a problem for me’ and then once I got there for the fight, I was like, `Aw crap! I’ve got more people looking at me than ever before, it’s a title shot,’ and I feel like I just focused on the outward appearance of things a little too much.

“I hurt my ankle before the fight and I was sick before the fight,” he continues. “I was trying really hard not to limp in front of the cameras, not to sneeze or sniffle in front of the cameras – stuff like that, paying attention to what people thought. I was limping because my foot hurt. And if I can limp and perform better on that day, let people think what they want, and let me go perform better.

“Limp or blow your nose – do what you’ve got to do to perform better on that day. It was little things like that I had a little bit of a lapse on, but everything got re-focused real quick afterwards.”

Not only did his focus reset, but McDonald also found himself staring at a list of adjustments and improvements that he needed to make for the first time in his career.

Up until his loss to Barao, the prodigious talent who began his career at age 16 and made his Octagon debut two months after turning 20 had always come away from his bouts with minor elements to work on. That was not the case once when he looked back on his loss to the Brazilian champion.

“What the Barao fight did was give me a big list of things to work on,” explains McDonald, who carries a 16-2 record into the cage Saturday night against the former WEC champ Faber. “Looking at my other fights, there wasn’t a big list of things for me to fix. My first fight in the WEC was an armbar, really quick – I got taken down once and I didn’t get punched at all, so okay, work on my cage defense. I did that. Next fight I had a rehydration problem, so I fixed that. 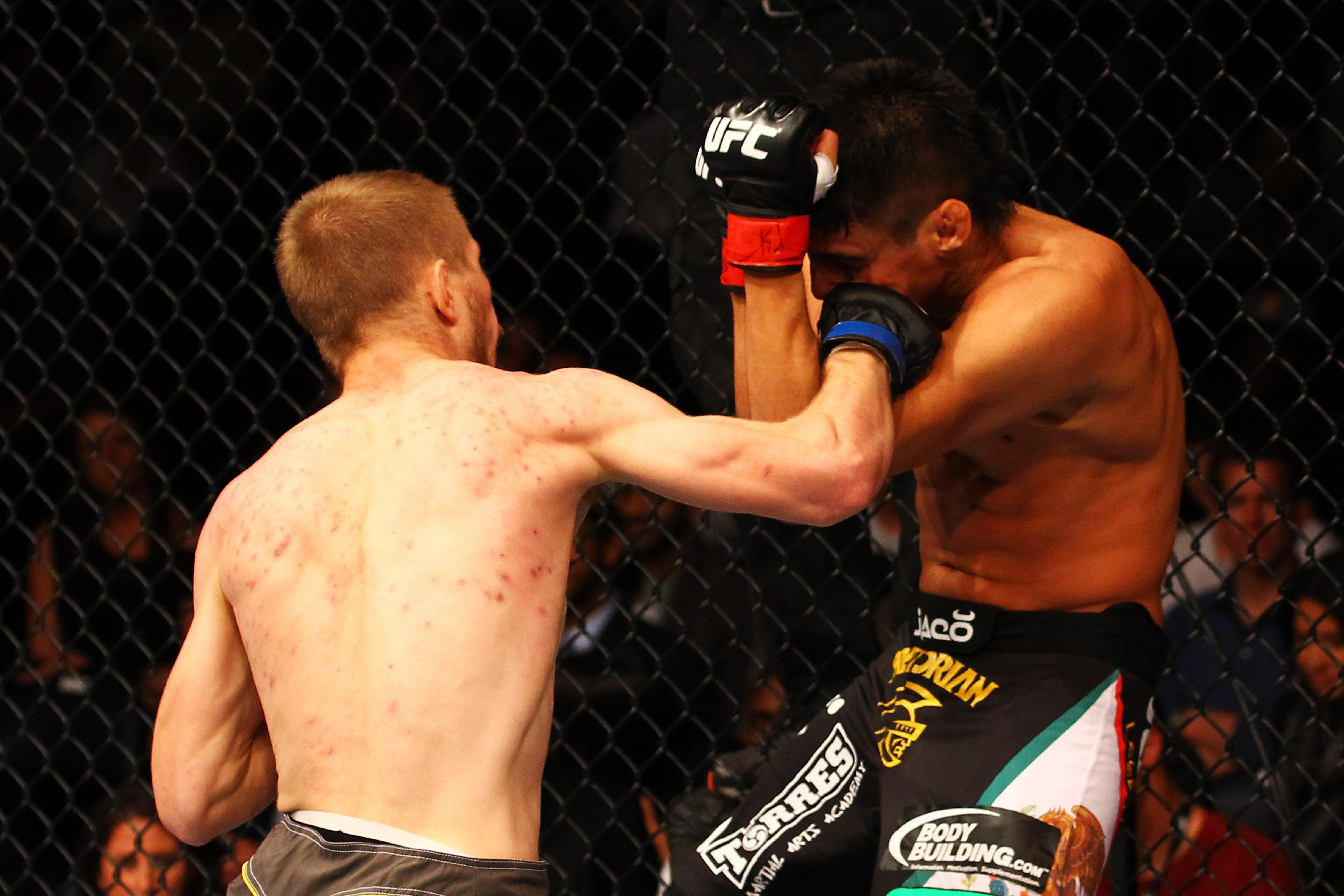 “The next fight, I had an injury. There weren’t any technical problems that happened, but there were stupid problems like that. I had an injury, so I had surgery. The Miguel Torres fight, I got punched six times with jabs, so I needed to focus more on not getting hit with jabs. I always had a small list of things to work on after my fights, and after the Barao fight, I had a huge, huge list of things that I needed to improve on and get better at doing. I went back and I feel like I put the right amount of effort and time into all those things.”

Those improvements showed when McDonald returned to the cage in August, as he got right back into the win column with a second-round submission finish of tough veteran Brad Pickett in Boston.

In turning aside “One Punch” in impressive fashion, “Mayday” re-established himself as one of the top competitors in the bantamweight ranks, and became the ideal dance partner for the wildly popular Faber, who also earned a dominant victory on the inaugural UFC fight card broadcast on FOX Sports 1 earlier this summer. > Watch: Mayday McDonald

During his climb up the regional ranks and even once arriving in the UFC, McDonald targeted certain fighters within his division as potential opponents, pinpointing Manny Tapia and former WEC champ Miguel Torres as two fighters he wanted to share the cage with at one point or another.

He would eventually face both, and each man suffered the same fate, falling to McDonald in the first round. Given Faber’s high profile as one of the top fighters in the lighter weight classes for the last five or six years, you would think “The California Kid” would have made his way onto McDonald’s wish list somewhere along the way.

“He’s been on my radar in that I’ve known for a long time that I could fight him, but the reason I saw Manny Tapia and Miguel Torres as people I wanted to fight is that I felt the reason people saw them as good, I could do that better than they did. I can’t do what Urijah does better than Urijah – take people down, cardio, pound them out – and I don’t want to; that’s not my style. 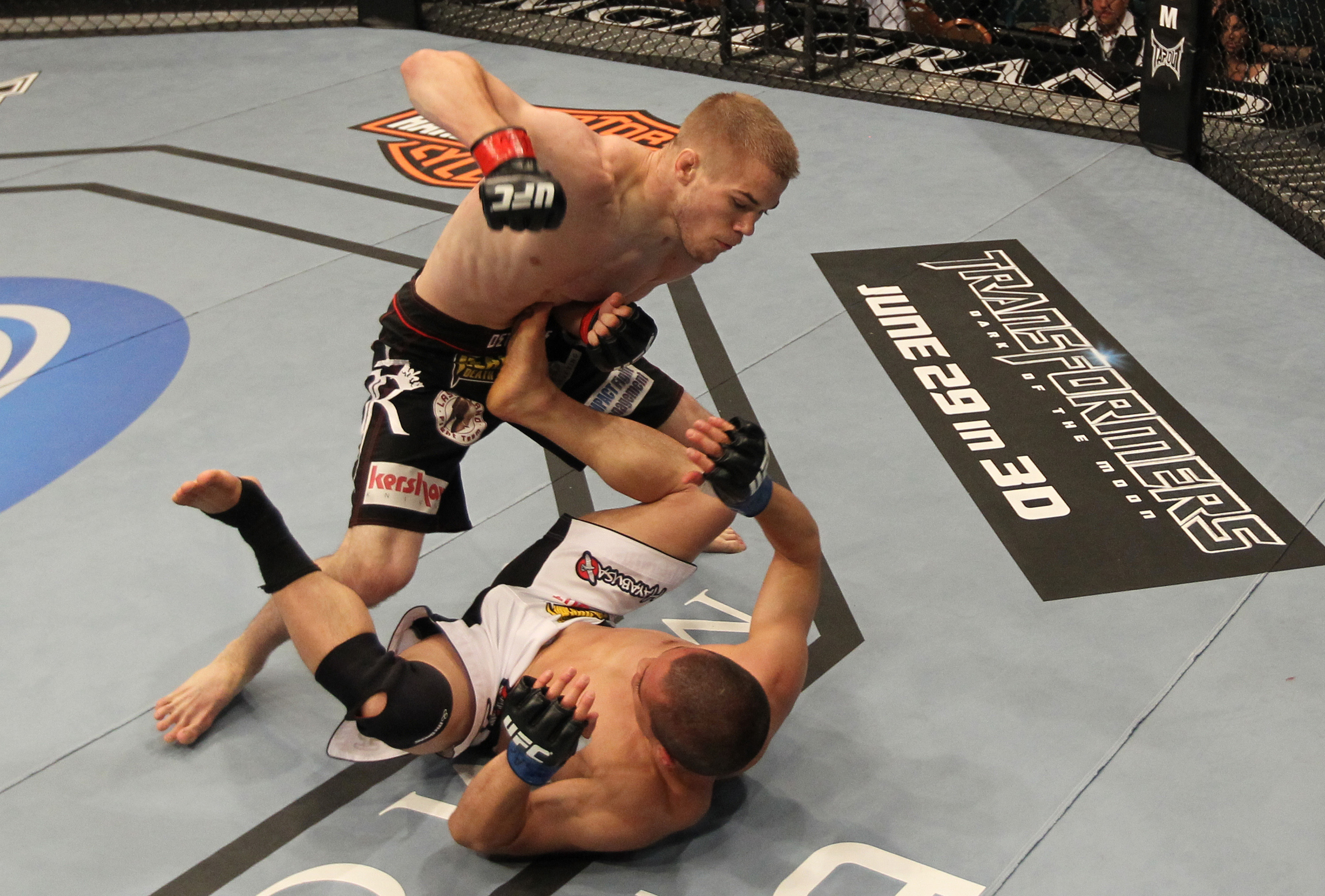 strikers, and I felt like I could do what they do well better than them. I felt like that was the spot designated for me. I don’t think that Urijah has a fighting style that I looked at and thought, `I can do what he does better than him, so I want to beat him.’

“It doesn’t make it any less or more motivation for me though,” he adds with a laugh. “I want to beat him. Losing sucks, and this is my job, and I’m going to go do it.”

That maturity and even-keeled approach to his career is part of what has helped McDonald become one of the top fighters in the 135-pound ranks at such a young age. While some fighters that reach the big leagues in their early 20s set goals for several years down the road, the grounded McDonald looks at his ascension and the opportunities before him from a completely different angle.

“Don’t focus on `I want to win! I want to win!’ Focus on the task at hand, and the win will come. That’s the way I think about this. The focus shouldn’t be on me thinking, `Oh, I have this many years or that many years.’ To me, it’s just this is what I love to do right now, and if this doesn’t work – if my next fight is my last one – I’ll be okay; I have other things that I’m good at, other things that I can do. I’m just going wherever God leads me.”

This week, he’s been led to Sacramento, where he’ll be forced to wait in the Octagon as the city’s native son bops his way to the cage to a mix of Tupac’s “California Love” and raucous cheers from the local fight fans that will undoubtedly pack the Sleep Train Arena on Saturday night.

A seasoned veteran with a championship pedigree and designs on positioning himself for another title shot, Faber represents a stern test for the already arrived, but still up-and-coming McDonald.

Just as with everything else, the wise-beyond-his-years 22-year-old carries a pretty straightforward game plan into the cage – one focused on what he will do, and less worried about how his opponent will approach the contest. > Watch: Faber vs. McDonald Preview 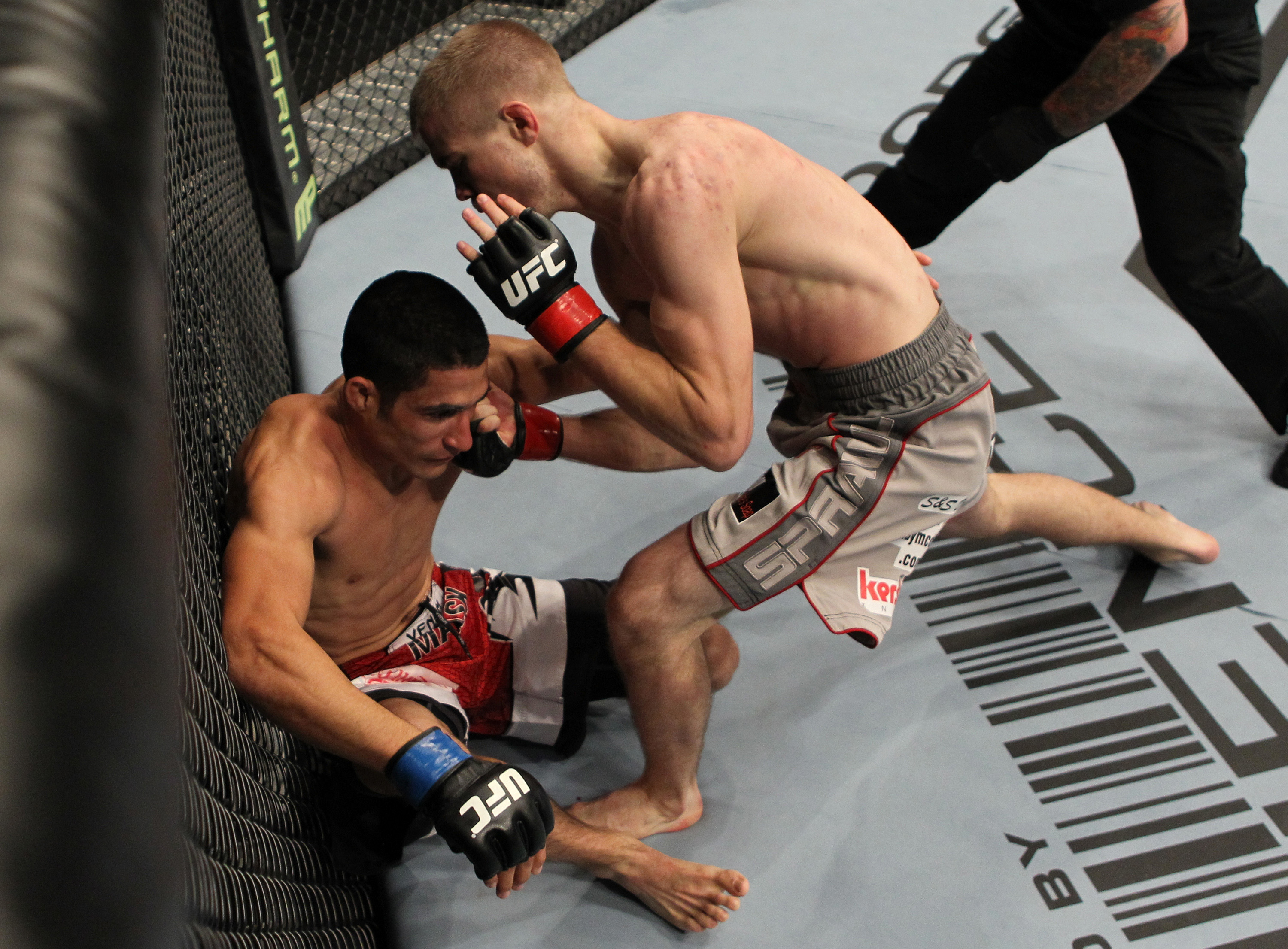 “I don’t know what his plan is, and I don’t know how it’s going to work – you never do – so I’m just coming in prepared for everything. I need to stay really relaxed and focused on what I’m doing. When you’re thinking about a fight, you can’t really think about it too much because you don’t know the other person’s game plan.

For McDonald, this fight – like the 18 before it – boils down to one thing.

“I hit everybody,” he states in a matter of fact way. “I’ve never had a fight where I haven’t rocked my opponent. I will hit him, and I don’t think he’s going to like it. We’ll see how he reacts to it, and we’ll play it out from there.”