“I have a very chess match-like mind, and fighting to me is just a game of chess." - Michael McDonald 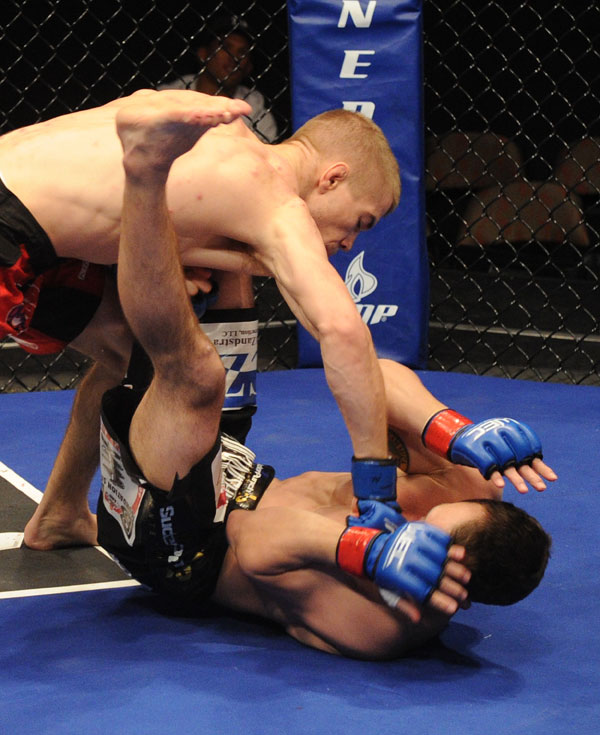 “I don’t like making excuses,” said Michael McDonald, referring to his first and only WEC bout last November against Clint Godfrey. Stricken with the flu on fight week, the highly-touted Modesto, California native called it “a trial of faith”, and even four hours before the opening bell, he was stuck in bed and feeling miserable.

“That was very hard mentally and spiritually,” he said.

Oh yeah, and he went on to win the fight, submitting the South Dakota veteran with an armbar at 2:42 of the first round.

Imagine what he would do if healthy. Yet that’s the thing about the 20 year old bantamweight prospect, who at the moment is the youngest fighter in the UFC; the expectations are so high that anything less than perfection would be a disappointment. It’s a unique situation, but McDonald takes all of the growing attention in stride.

11-1 in mixed martial arts, the buzz is growing about “Mayday”, and with good reason. An amateur at 14 and a pro at 16, McDonald has risen quickly through the ranks and has shown himself to be able to do it all thus far. He already has a brown belt in jiu-jitsu, he’s ended seven of his 11 wins by knockout, and he’s not even 21. And if you think that he’s feasted on cupcakes to get here, former WEC bantamweight title challenger Manny Tapia and former WEC featherweight champ Cole Escovedo dot his pre-Zuffa record.

Escovedo’s name is there twice, as he was the one who handed McDonald his lone loss in May of 2009. Stopped in the second round, the young man who you see today is far removed from the one who entered the bout against Escovedo nearly two years ago.

“I felt like I had all these pressures on me when I fought Cole Escovedo for the first time,” he said. “I had the weight of the world on me and it just broke me. I didn’t want it anymore, I couldn’t bear to let other people down, and it literally just tore me apart.”

He was only 18, but he had spent much of his teenage years being anything but a typical teenager.

“I actually had a major struggle with that in my high school years because everyone was going to football games on Friday night, they’re going out partying, having fun, they’re hanging out every day, and I couldn’t do that. I was in the gym every day, and for a while, I mistook this as a burden.”

Then, predictably, came the rebellion.

“I never got into parties and drugs and stuff like that, but I love women, and that was always my thing,” said McDonald who moved out with his girlfriend at 18.

But after his first loss, McDonald got a heavy dose of what really mattered to him, and it wasn’t hanging out at the local football game or with his girlfriend. He was a fighter.

“I went back to the drawing board to re-evaluate why I was even fighting,” he said. “Sometimes I just wanted to be a normal kid, but I know that every normal kid wants to be me, so I learned appreciation for the gifts that God has given me and the opportunities that he’s given me.”

Along the way he found his way back to his church, and he hasn’t looked back since. As for the fighting end of things, that’s been smooth sailing as well. In October of 2009, he returned with a TKO of Carlos Garces, and four months later he needed just 4:31 to defeat Tapia, who had gone into the middle of the second round with Miguel Angel Torres and went the distance with Eddie Wineland.

Then, in July of 2010, it was the rematch with Escovedo, who was riding a four fight winning streak that included a head kick knockout of Yoshiro Maeda in a DREAM bout in Japan. This wasn’t the same Michael McDonald.

“I believe that it was just mental, emotional, and spiritual maturing,” he said. “At the time of the first fight, I still felt inside like I was a boy dealing with all these pressures and not wanting to grow up. When I lost I really had to go back and accept everything that I was doing and kinda re-evaluate everything, and when I came back, I felt like I was mentally one hundred percent. I was just confident and I was in a better spiritual place.”

At 1:12 of the second round, McDonald knocked Escovedo out, exorcising this particular demon and moving on. His next stop would be the WEC and now, he enters the UFC Octagon with his first assignment being fellow newcomer (and late replacement) Edwin Figueroa this Saturday on the UFC Fight Night card in Seattle. As is his custom, he’s calm, cool and collected, something he owes not only to his work ethic in the gym, but outside of it as well.

“I do a lot of studying,” he said. “I have a very chess match-like mind, and fighting to me is just a game of chess. I have to break everything down incredibly, but the biggest thing for me is that when I’m spiritually good, everything’s good. I can come in the gym and put all these extra hours in, but nothing’s gonna matter if I’m not right in the head, and that’s what my team has kinda had to learn about me. When I’m motivated and everything’s good inside, then everything is good and I’m a very hard person to deal with. But when it’s not, I get tore up by everybody.”

He laughs, and when you’re this good, you can afford to joke about getting your head handed to you in the gym. But refreshingly, he’s not cocky. He’s just a young man with his head on straight, his faith in order, and possessing the talent to possibly do great things in this game. Not that it all came overnight.

“I’ve been kinda cocky and I’ve been humbled,” he said. “So I don’t want people to see me and say ‘oh, this kid’s this or that,’ because I’m nothing special. I didn’t plan this. I never woke up and decided in some great epiphany that I wanted to be a UFC fighter. But this is the biggest thing for me right now and I feel that’s where I’ve been called to. Eventually I would like to get more involved with my church and I would like to open up my own school, but those are long-term goals right now.”