Michael McDonald: Man on a Mission

"It’s very cool that I feel like I’m the best fighter I’ve ever been,
and yet the list of things that I want to do and the list of ways that I
want to progress is bigger than it ever has been before." - Michael McDonald 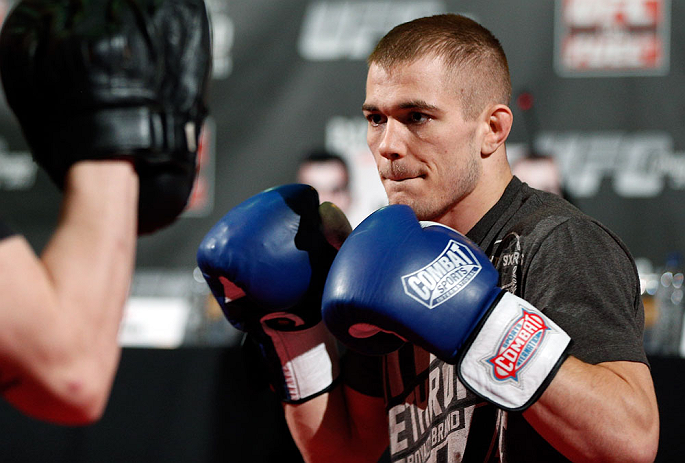 If Michael McDonald defeats interim bantamweight champion Renan Barao this Saturday in London and becomes the youngest titleholder in UFC history, many people may ask to see the Californian’s birth certificate, because it’s hard to believe that he’s only 22 years old.

And that’s not just a reflection on his fighting ability, which has resulted in 15 wins out of 16 pro fights, four of them coming in the UFC, but on his maturity outside the Octagon and his approach to the sport. Truth be told though, while he’s just 22 chronologically, in fight years, he’s a grizzled vet.

“I think now I have about 10-12 years invested into this sport,” said McDonald, who turned pro in 2007 at the age of 16. “A lot of people ask me about my age, and it’s not really a factor. It’s more of a factor when you’re 16 or something like that. But once you reach around 18 to 20, all it is is how much time your mind has had to progress in martial arts and just whether your body can carry out your knowledge. And my knowledge of martial arts is vast, and now at 22, my body is as capable as anybody else’s is, whether they’re 25, 30, or 35, or whatever. My body is just as capable as theirs, and my knowledge is just as much as theirs as well.”

That’s a scary proposition, especially considering that he’s only going to get better as the years go on. It seems that the only thing that can hold him back at this point is the bane of many athletic phenoms: reading his own press clippings and letting life outside the Octagon and gym take precedence over what happens inside of it. But so far, McDonald has kept a low profile while letting his faith handle the rest.

“I believe my security is in Jesus Christ and knowing who I am with God and knowing that this is my job,” he said. “This is not my identity, this is not why I’m here. This is God’s mission to me; that’s all this is. I could be doing anything. I could be a pastor somewhere, I could be working in McDonald’s or another place, I could be going to school and becoming a business administrator for whatever I want to do. This is just my job, and the fact that God has me fighting, this is my mission. My worth doesn’t stem from this, and it doesn’t affect me or who I am. This is specifically my job, and I have to keep that in order. I think when people get that confused with their identity, they believe this is why they were born. They think this is all they have going for them and that’s the start of their downfall, I think. They let the media, they let what people say, and they let their image come in and change who they think they are as a person, when being humbled and grounded is what got them to where they are. It’s like they get too tall for their foundation, and they fall over.”

Modesto, California’s McDonald shows no signs of falling over or slowing down, and while he has earned his prodigy status in the sport, he doesn’t feel that he’s truly arrived yet. And he’ll probably never feel that way, but that’s a good thing.

So is Renan Barao somewhere on one of those lists?

That’s not to say McDonald’s journey to this point has been a Hollywood story. He suffered a knockout loss to Cole Escovedo in 2009 (later avenged), and a hand injury has kept him out of action since his first round win over Miguel Angel Torres last April. He’s also questioned whether pro fighting was the right move for him.

“From the very first day I started training martial arts I have never once questioned that I wanted to do this until the day that I die,” he said. “But wanting to be a fighter, as a job, that is a completely different story and I had second guessed it many, many times. It’s not always the most fun thing to do. My job every day is to deplete all of my energy, and when I come home I have to find energy for my family, for God, for my girlfriend, my dog, and I have to find energy for all these different things which just isn’t there. It’s not always a fun thing to do, and I’ve second guessed it many times. I’ve put enough time into this sport and knowledge into this sport that I can have a PhD in something else. And for me to have all my chips on one table in something where I can get injured and not have a job tomorrow, it’s a scary thing. So I’ve definitely thought about it, but I have too much time invested in this. This is my mission and I feel like this is where God wants me to be.”

But is the most mature 22-year-old on the planet ready for his life to change should he defeat Barao and become a world champion?

“I’ll say this: I don’t want my life to change,” said McDonald. “I’m prepared for my job to change and to work some more hours and I’m looking forward to that. But when it comes to my life and what I define as my life, I don’t want that to change.”