"I’m going in there loose, relaxed and to do exactly what
we trained: push the fight and see how it goes.” - Michael Johnson 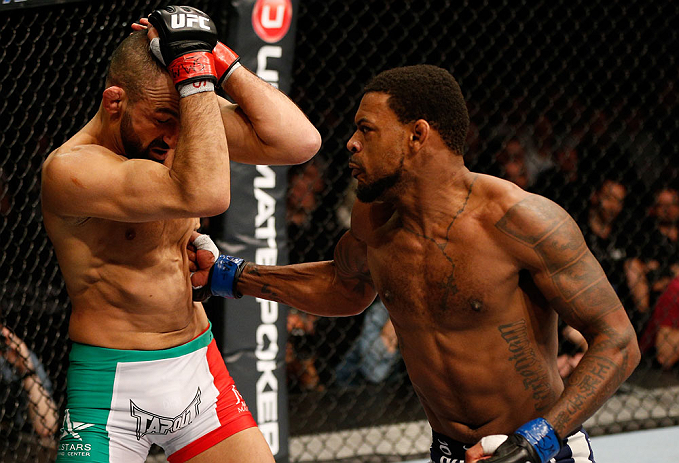 Early in his young life, Michael Johnson had designs on playing in the National Football League until he found himself in the wrong place at the wrong time. Hard work and persistence landed him a spot on Season 12 of The Ultimate Fighter. He advanced all the way to the final, where he dropped a unanimous decision to Jonathan Brookins. After a fast start to his UFC career, “The Menace” currently finds himself in a potentially perilous position entering what’s expected to be his toughest challenge.

Regrets? Hardly. After all, Johnson did parlay a lost opportunity on the gridiron into an MMA career that had him close to a six-figure contract, but still with a place in the Ultimate Fighting Championship. Alas, a 4-4 UFC record has been hard to digest. Entering Saturday's UFC Fight Night showdown against Joe Lauzon, The Menace has spent four months licking his wounds suffered from two straight listless losses after winning three of his previous four bouts. In victory, Johnson looked impressive, notably in a second round knockout of Danny Castillo that earned him "Knockout of the Night" honors. It's those last two fights, a unanimous decision setback to Myles Jury and a third round submission loss to Reza Madadi, that left him down and out.

“I don’t want to think about it that much, but if I were to pinpoint one thing, I would have to say I was expected to win those fights and I didn’t,” Johnson said. “I took my opponents very seriously, don’t get me wrong, it’s just that I looked at it like there’s no way these guys can beat me. I went in there and took two losses that on any given day if I’m at my best I should have not lost those fights.

“I went in way too relaxed and taking it for granted. That will never happen again. I learned my lesson.”

For Johnson's sake, the lessons learned must be parlayed into victory Saturday in Boston. Lauzon (22-8 MMA, 9-5 UFC) remains a top-tier UFC lightweight contender who has both won and lost in spectacular fashion. On some nights, J-Lau has proven deadly. On others he's been had, and Johnson knows this. Unlike the lead-up for his previous fights, The Menace (13-8) is fiercely connected to his game.

“His great positions are my not-so-great positions, and those are the positions I’ve been working into,” Johnson said. “Preparing for this fight mentally is a big thing. My nerves are definitely running wild because this is a huge fight. Joe’s been around for a long time and he is a fighter that before I got in the UFC I loved watching him fight.”

Because his UFC career has reached a critical stage, Johnson won't be admiring Lauzon up close. Having once enjoyed a lofty status as TUF runner-up, "The Menace" needs a win or he could be considering another career besides football and MMA.

“Getting a victory, yes, it would definitely reach a critical stage,” Johnson said. “It would get me back in a position I was working my way to until these past two losses. I kind of lost myself in a way. I strayed away from what got me those three wins in a row. I’m getting back to the style I had before that. Definitely a win Saturday will put me in a great position to get back up to the top of the rankings and definitely be in a spot where I can make some noise and be considered fighting for a title pretty soon.”

Before Johnson can even think about dreaming of gold, he'll have to figure out how to defeat Lauzon, motivated to return to the win column following a unanimous decision loss to Jim Miller last December at UFC 155 that was the Fight of the Night and the 2012 Fight of the Year. Postfight honors are nothing new to J-Lau. He's a six-time Submission of the Night winner to go with winning Fight of the Night five times and Knockout of the Night once. A resident of East Bridgewater, Mass., the last time Lauzon fought in Boston he rode the support of a partisan crowd to a first round, armbar submission over Gabe Ruediger, one of his six "Submission of the Night" honors, in August 2010 at UFC 118.

With Zuffa making its second trip to Beantown, Lauzon wanted another hometown fight and he got it. But while fighter emotions are often buoyed by crowd support, the expectations of winning also increase. That, says Johnson, puts the pressure on his opponent.

“He’s got a lot on his shoulders,” Johnson said. “I’m going into his backyard and everybody is counting me out, so the pressure is all on him.

“The fans are blocked out once I get into the cage; it’s just me and Joe. The crowd can’t fight for him. All they can do is cheer and boo and whatnot. He’s gotta come in and be on his top game because I’m definitely going to be at mine. I’m going in there loose, relaxed and to do exactly what we trained: push the fight and see how it goes.”

Growing up in St. Louis -- he lost his father to a heart attack at the age of 10 -- Johnson has spent his life pushing the pace of his athletic career. He was a three-sport varsity athlete at Marquette High School (football, wrestling, track) and received a football scholarship to Central Methodist University to play running back before transferring to Meramec Community College after he became ineligible his sophomore year.

At Meramec, Johnson studied business and public relations, and even briefly returned to football. He was considering a career in PR before the MMA bug bit him in 2007.

“I just found fighting and I fell in love with it, and I put everything else on hold because I had something that I actually wanted to do,” Johnson said. “I could find a way to make money and make a living, rather than go through school and then have to wait." 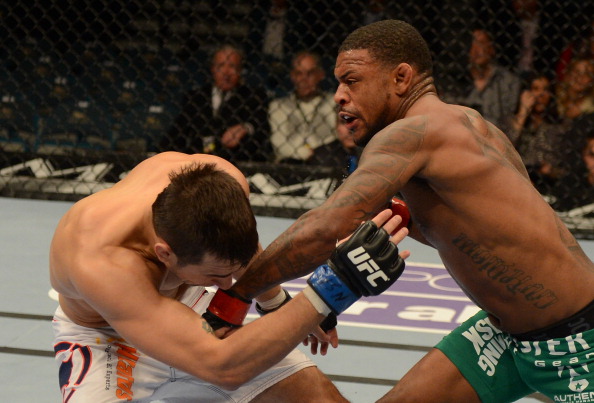 Besides the income, fighting has kept Johnson out of trouble. It's not that he had a rough upbringing. He grew up in a small college town and, like most kids, got into his share of fights. These days MMA is keeping him grounded and is an outlet that helps him avoid filling a desire to get into fights while channeling his aggression in a positive manner.

“Being involved in something always keeps you out of trouble because if I were to get in trouble outside of the cage, I would be letting myself down, along with my trainers and coaches and training partners, everybody who depended on me to help them get better and I also depend on them,” Johnson said.

Exactly why he was initially forced out of football, Johnson declined to elaborate, other than saying he was “in the wrong place at the wrong time.” Come Saturday night, Johnson gets to right new wrongs, provided he stays in control, and remain on course to a no-regrets life.