"I’m going to stay in his face the whole way, and once he gives me an opening, once he slips up, I’m going to end it." - Michael Johnson 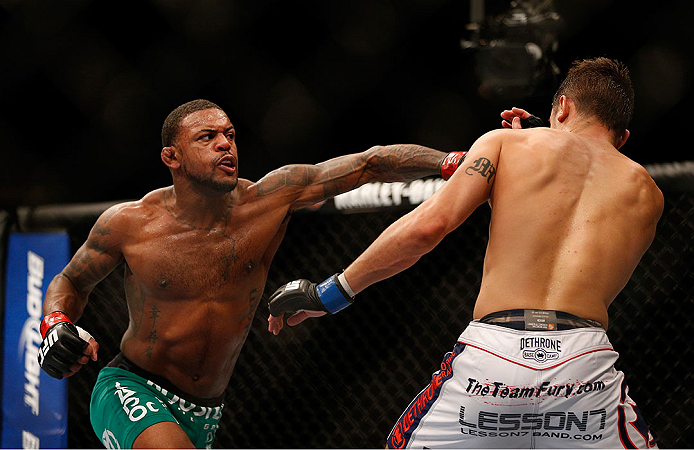 Last January, UFC lightweight Michael Johnson deemed 2012 “The Year of The Menace,” and set his sights on accumulating enough victories to end the year on the outskirts of the top 10.

He likened his climb from the low end of the 155-pound ranks to Mortal Kombat, the incredibly addictive fighting game from the early ‘90s. Just like Lord Raiden in the game, Johnson would have to defeat multiple foes in order to reach the fringes of contention by the time it was time to sing “Auld Lang Syne” again.

Through the first 10 months of the year, things were right on course. Decision wins over Shane Roller and Tony Ferguson preceded a second round knockout victory over Danny Castillo in October. Three consecutive wins had Johnson climbing the rankings, and an opportunity to fight for a fourth time in December appeared to be all that was standing between the 26-year-old member of “The Blackzilians” and the goal he set for himself nearly a year earlier.

Just as progressing through a game like Mortal Kombat is difficult to do on a single quarter, so too is stacking up consecutive wins in one of the deepest, most talented divisions in the UFC. Rather than reaching his target of ending 2012 within reach of the upper echelon, Johnson was turned back.

“I’m definitely on my second quarter,” laughed Johnson a week before departing for Sweden for his first fight of 2103.

Losing in the UFC is a lot like losing in the game. You don’t get to pick right back up where you left off; instead, you have to take a step back before you can move forward. Johnson will now face veteran Reza Madadi, looking to make up the ground he lost in December when his climb up the rankings was halted by Myles Jury.

“Hopefully they look at it like a second chance, I don’t know. I don’t want to say a second chance because I don’t really think I took a huge step back. I’m just looking at this fight like another tune-up fight for me to get my mind right, and get a look at these bigger name opponents.

“I feel like 2012 was still a good year,” Johnson said. “Hell, I went 3-1 last year. It might not have ended the way I wanted it to, but I still beat three very tough guys, and lost a decision to a tough guy. It’s not like I went in there and got my ass beat; he decisioned me. I just have to look at it that way.”

There is a different tone to Johnson’s voice this year as he talks about his upcoming fight in Sweden. Losing can do that to you.

Last year he was light, carefree; questions were answered in long, rolling thoughts dotted with laughter and jokes. This year, his responses come in short, candid bursts; no wasted words, no beating around the bush.

It feels like a product of his fight with Jury at UFC 155 and the intense focus that has fallen on the South Florida-based fight team he is a part of. Just as things were going well individually and collectively, Johnson and several other members of “The Blackzilians” hit a bump in the road, and now it’s time to get back on course.

“I did everything right up until the fight, except fight,” said Johnson of his performance on the UFC’s annual end-of-the-year event. “I just wasn’t mentally ready. It’s one of those things that happen. It’s one of the many mysteries of being a fighter: you’ve done everything to prepare, and then you get in there and you just don’t perform or you just get lost. That’s exactly what it was; I just didn’t perform.

“I came in way too relaxed,” he continued, offering an explanation for his poor showing. “I wasn’t threatened. I wasn’t nervous about anything, and that was the bad part. I felt that he couldn’t do anything to hurt me, and I pretty much went into the fight worriless. A scared fighter is the more dangerous fighter rather than a relaxed fighter, and I was just way too relaxed.

“I just have to get back to being hungry, and not being too comfortable in there. I have to realize these guys are here for a reason, they do have tools that can put me in jeopardy, they are good in some aspects, and they have some things that I need to be concerned about. I need to put myself in a position to where I’m more aware of what (my opponents) can do to me, what they’re capable of doing, and not so much me looking at it like, `There is absolutely nothing these guys can do to me.’

“We’re just in a slump,” Johnson added in regards to the recent struggles of his teammates inside the Octagon. “Every good team has their slumps, and we just need to keep our focus and get back to the winning side.

“We need to kind of be left alone. We’ve got all this hype built up around the team, we got all this publicity, and everybody expects great things because the camera is always on us. We have these big expectations, and then when we get a couple losses, all of a sudden we’re the worst team ever. It’s just a slump. We still do everything right. We’re still working hard, pushing each other hard, and we’re going to get back to starting to win fights.”

The former Ultimate Fighter finalist will get the opportunity to be the one to get his team back in the win column on April 6 in Sweden when he takes on the 32-year-old Madadi, who lost a questionable split decision to Cristiano Marcello last time out.

Though born in Tehran, Iran, the lightweight “Mad Dog” has called Sweden home for a number of years, and will be competing in his own backyard for the second time in three UFC appearances. While some people might cringe at the idea of crossing the Atlantic Ocean to face an opponent on their home turf, the confident 155-pound contender Johnson relishes the chance to play the part of the bad guy.

“I love the opportunity to travel and go to Sweden. I’m looking forward to all the boos that are going to be waiting for me at the weigh-ins. I’m going to enjoy going into a guy’s home country and beating him in front of all his fans. I’m embracing that for sure. It’s fuel to my fire.”

Not that Johnson needed added motivation.

After coming so close to reaching the goal he set for himself last January, the man known as “The Menace” knows he needs an impressive performance against Madadi in order to convince both fans and the UFC brass that he’s a legitimate threat in the lightweight division, that he’s deserving of bigger matchups moving forward, and that’s exactly what he intends to do when he steps into the cage inside the Ericsson Globe Arena.

“It’s a lot of pressure to go out here and beat the guy that I’m supposed to beat,” admitted Johnson. “I don’t think he’s as skilled as me, but I have something to prove now that I lost to Myles. I’ve got to make people remember the beginning of last year, and what I did except for the last fight. I have to show people that I am a dominant force in this division, and I’m not going anywhere.

“I’m not travelling all the way to Sweden, out of my comfort zone to lose; that’s definitely not an issue. I’m not going over there to put forth a s***** performance and not do what I’m supposed to do.

“I’m going into this fight with a total killer’s mentality. I’m going to go out here and try to finish him as early as possible. I’m not backing up once. I’m going to stay in his face the whole way, and once he gives me an opening, once he slips up, I’m going to end it.”