Michael Johnson - Mortal Kombat in the Year of The Menace

"I’m just trying to stay focused and stay on the right track – not let anything interfere with what I’ve got to do to get the job done." - Michael Johnson 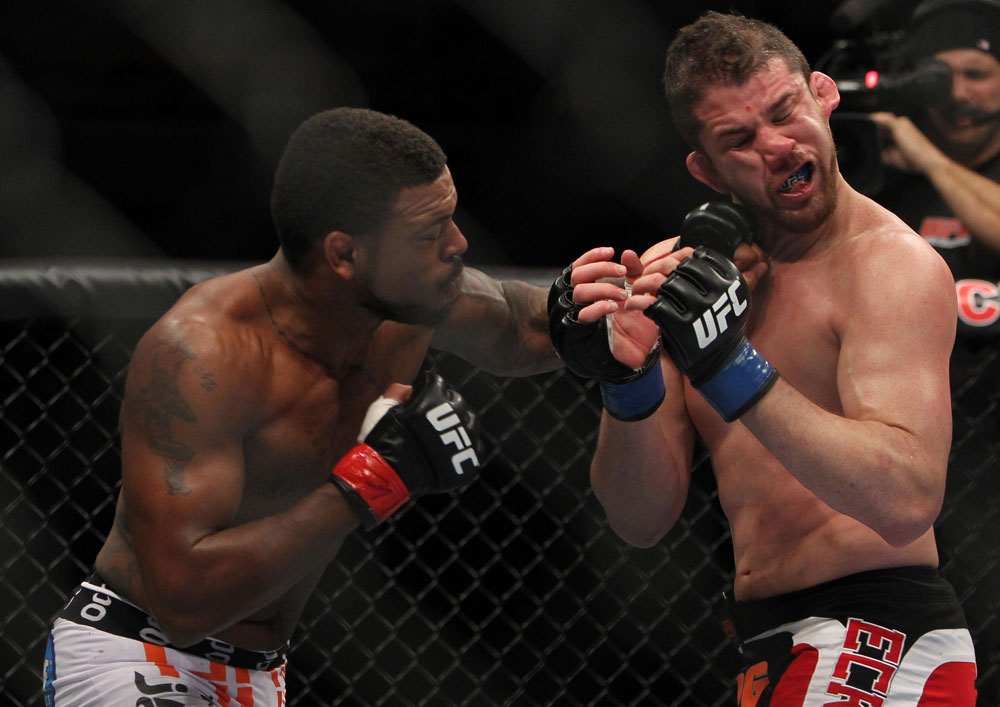 By the time people are once again making resolutions they’re not likely to keep and faking their way through another bad rendition of Auld Lang Syne, Michael Johnson wants to be in the top 10 of the UFC’s lightweight division.

That was the goal he set out for himself at the start of 2012. No more backwards steps in his career. No more inconsistency in the cage. This was going to be his year; “The Year of The Menace.”

The former Ultimate Fighter finalist was realistic about the difficulty of the challenge he’d set out for himself. Entering the year off a first-round submission loss to British standout Paul Sass, Johnson knew he’d have to work his way up the rankings one step at a time. He likened the long, difficult road ahead of him to Mortal Kombat, the iconic video game that spawned a pair of classic, mediocre movies and countless console adaptations and sequels after introducing gamers to Scorpion, Sub-Zero, Raiden, and the rest of the cast of characters in the early ‘90s.

Just as your fighter of choice had to work their way through a gauntlet of opponents that became increasingly more difficult to defeat, so too would Johnson, starting with former WEC contender Shane Roller. Unlike Mortal Kombat, however, a loss for Johnson wouldn’t come with a 10-second countdown and the opportunity to continue from where you left off with the press of a button or by sliding another quarter into the coin slot before the clock reached zero.

Heading into his third fight of the year, Johnson is still progressing towards his goal on his very first quarter.

After hanging on to a decision win against Roller in January, the 26-year-old lightweight stepped in to face fellow TUF alum Tony Ferguson on short notice in May, and promptly delivered his most complete performance to date, pitching a shutout against “El Cucuy,” halting Ferguson’s three-fight winning streak while taking another step forward on his journey towards contention.

“It’s a good year for me so far; my confidence level is good,” laughs Johnson, happy to engaging in another interview as he prepares for his third fight of 2012. “I’m just trying to stay focused and stay on the right track – not let anything interfere with what I’ve got to do to get the job done.”

The charismatic member of “The Blackzilians” team based in Boca Raton, Florida garnered positive reviews for his strong showing against Ferguson, his performance surprising those who expected the Season 13 winner to continue rolling against Season 12’s runner-up. Despite his recent success, making headway in the lightweight division is a constant struggle, as each event seems to produce another memorable bout and potential contender to keep tabs on. As such, Johnson has learned to embrace the underdog role he’s been repeatedly cast in so far this year, using the minimized expectations to help push him further along on his journey towards the top 10.

“That underdog role is real difficult, but to me, I don’t think I’m the underdog in any fight I go into,” admits Johnson. “As far as the media and everybody else that pays attention to the sport, if they think I’m an underdog, that’s fine with me. I love that – I love people seeing me as the underdog going into my fights. I hope my opponent thinks of me as the underdog going into the fight. It takes all the pressure off of me; I don’t have to live up to everybody’s expectations of how they see me coming into the fight. I can just worry about my game plan, and focus on fighting the best fight I can. It’s good to be the underdog, and I hope it continues. I hope after this fight and going into every fight I’m the underdog.

“For me it’s easier when everybody doubts me. I want people to do that because they don’t know my true talents, and as long as my team and everybody here is on the same page, that’s great.

“For me to break from the underdog role, it’s going to take (me getting to) where I want to be – winning every fight so that people can no longer cast me as the underdog,” forecasts Johnson. “But in this division, man, everybody is so tough and fighting to make the top 10, so I might still be the underdog in every fight even when I am beating everybody I face. That drives me. That’s extra motivation for me – proving somebody wrong. The worst thing anybody can do is to doubt me.”

The more he continues to climb the ranks of the lightweight division, the less people are going to be able to overlook and underestimate Johnson, who is now 3-1 since losing being bested by Jonathan Brookins in December 2010. While his consecutive victories highlight the improvements “The Menace” had made since departing the Ultimate Fighter house, some of the elements that have played a key role in his development can’t be found in his highlight reel.

“It’s always about the minor adjustments – going back, watching my film from the fight, and noticing things. `How can I make myself better from this? How can I be different from this next time?’” explains Johnson, who gives a great deal of credit to the cast of veteran fighters and coaches he spends every day with in South Florida, as well as the team at Authentic Sports Management.

“My management team does a great job – and I think I’ve said this before – of taking all the stress off my back. The only thing I need to worry about is training and fighting. They do a great job of putting me in that position. It’s the same with our coaches. Everyone thinks it’s a one-on-one sport because we’re fighting one-on-one when we get in there, but my coaches are in there just as much as I am. They put in the time and the dedication, and if it wasn’t for them and my management team, I wouldn’t be at the level I’m at now. That stuff plays a huge factor in my success.”

Inside the cage, the most visible contributor to Johnson’s recent run of his success has been his ability to maximize the athleticism that made him Georges St-Pierre’s first pick on The Ultimate Fighter. Paired with improved conditioning, Johnson has used his natural athletic instincts and gifts to elevate his offense, his increased movement taking his striking to a new level, which in turn makes his wrestling a more dangerous weapon as well.

“I think my athleticism sets me apart from everybody else,” says Johnson. “Some people are great at jiu-jitsu or they’re great at standup; I just want to bring everything together, and use my athleticism to be the most well rounded fighter I can be. That’s my standout point, so as long as I stay on top of maximizing my athleticism – keep getting stronger and faster – you’re really going to see me break away from everybody in this division.”

Johnson’s next chance to showcase his athleticism and continue in his climb up the lightweight ladder comes on September 1st against Danny Castillo at UFC 151 in Las Vegas. Like Johnson, Castillo has quietly put together a nice little winning streak, stringing three victories together over the last 10 months, most recently getting the best of prospect John Cholish on the same night Johnson topped Ferguson.

“We’re both great fighters – both entertaining fighters,” said Johnson. “You won’t get a boring fight out of either one of us; I think we can both guarantee that.

“He’s on a three-fight winning streak, and that’s really tough to do in this division,” he added. “I think he’s kind of got a chip on his shoulder that he probably sets himself above where he is. We’re similar fighters coming from our wrestling backgrounds, so it’s going to be pretty interesting to see how this plays out.

Like every fighter, Johnson has a best-case scenario for how the fight with Castillo plays out, one that involves him duplicating the achievements of fellow lightweights Donald Cerrone and Joe Lauzon on the last two UFC events, allowing him to leave Las Vegas with a win and a pair of bonus checks to bring back to South Florida. More importantly than things going according to Hoyle, however, is for Johnson to defeat another opponent and move one step closer to reaching the goal he set out for himself at the start of the year.

If he keeps doing that, the man with the Mortal Kombat approach to his career knows he will eventually reach the point where he’s battling the likes of Shang Tsung, Shao Kahn, and their favorite four-armed henchman.

“For me to move up this ladder, I’ve just got to stay doing what I’m doing: working hard, staying focused, not letting any outside things get in the way. I’m fine with taking whatever fights (the UFC offers me) or stepping in on short notice. We’ll see how many it takes, but I have a feeling like I’m getting pretty close. I would say a couple more fights and I can see myself starting to break into the top 10 by the end of this year – just as I set out to do.

“I’m going into my third fight (of the year) – hopefully I can seal the deal, and get another one. You never know. I might be getting close to fighting Goro early next year or something like that.”