Michael Johnson Is Going To 'Keep Riding The Featherweight Train' 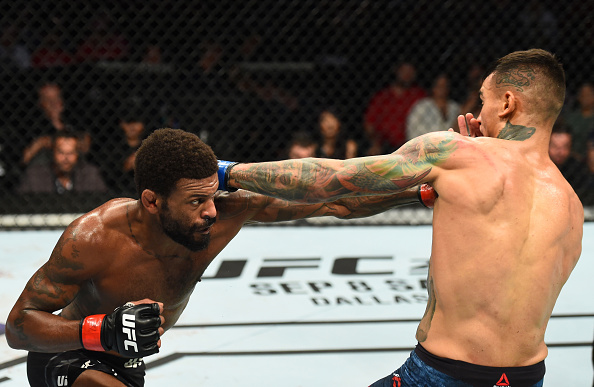 Michael Johnson punches Andre Fili in their lightweight fight during the UFC Fight Night event at Pinnacle Bank Arena on August 25, 2018 in Lincoln, Nebraska. (Photo by Josh Hedges/Zuffa LLC/Zuffa LLC via Getty Images)" align="center"" />Styles make fights. So when Michael Johnson heard that Artem Lobov needed an opponent for Saturday night’s UFC Moncton card, he knew that their styles would make for a fight.

“I love guys that come in there and fight,” said “The Menace.” “Regardless of their record, regardless of their skill level, he (Lobov) is a guy that comes in there and throws punches. He doesn’t back up, I don’t have to chase him, and we’re gonna have fun and we’re gonna show Moncton what it’s really like to have a UFC in town and we’ll put on a helluva fight for the fans.”

On paper, it is a stylistic winner that fits nicely into the co-main event slot in Canada, but behind the nuts and bolts of the fight is the real story, that Johnson really must be settling into life as a featherweight if he is willing to take a short notice assignment in a division he’s only been competing in since the beginning of the year.

“For now,” he laughs. “I’m still considering myself a lightweight and a featherweight. We’re just gonna keep riding the featherweight train, but at the same time, if a big fight opens at ’55 or if I need to come back up and remind three of the top five guys in that division that I beat them and I’m coming back, I will.”

That’s a good place to be in, but most fighters who make the move south don’t change their out of camp lifestyle too drastically. Johnson has made the complete move to featherweight, and while he admits to being “a little heavy” when he got that call to fight Lobov, he says the weight has been coming off with no issues. And the way he sees it, these days, he will always be down for a fight, whether it’s on eight weeks or eight days’ notice.

“I don’t really question myself anymore,” he said. “I’m a veteran, I’ve been in the sport for quite some time, and I’m a fighter; this is what I do and this is what I signed up to do, so whenever I get a call about a fight and I’ve been training like I have, I’m gonna jump on it, regardless of my weight cut. I’m at a point in my career where there’s no time to be wasted. I want to fight, you get paid, I need to keep climbing the ladder, and put a stamp on my legacy and my career before it’s all said and done.”

Everyone talks about it, very few and I mean very few are actually about it! This is a man on a mission, and I’m about it every second of the day! Nice little surprise in store for you guys! I’m in there a lot sooner! #teammenace #stepup #menacemoves #realfighters #lastofthemohicans #lastofus
A post shared by Michael johnson (@menace155) on Oct 11, 2018 at 5:14am PDT

After the move to featherweight resulted in a loss to Darren Elkins in January – his third in a row - Johnson had some winning to do before talking about the prospect of a bright future. In August, he got that win, defeating a tough Andre Fili via split decision.

“There was a little relief after that fight,” he said. “I remember having like a pound of bricks on my chest for a while, losing three in a row and figuring out what I’m gonna do. Then I get a win, but it’s only a little bit off my chest. It’s only a little breath and then I gotta go right back into it to get ‘em off me even more. So I’ve gotta stay focused and keep grinding away and getting wins.”

On Saturday, he can make it two straight for the first time since 2015, and that would be a nice way to head off into 2019, but the 32-year-old has a more ambitious plan than that.

“I’m definitely gunning for December when I get finished with him,” Johnson said. “I stepped in for this one late notice and I wanted to fight in December originally, so that plan is still on the table for me. I suffered a defeat early in the year and I picked up the pace and I want to finish strong. That’s what it’s all about – how you finish. If I can go into 2019 with a 3-1 record from the year before, I can really start making a bigger noise. I’ve already got the following, I’ve already got the name; now I just need to show up in the cage and remind people how dangerous I am.”