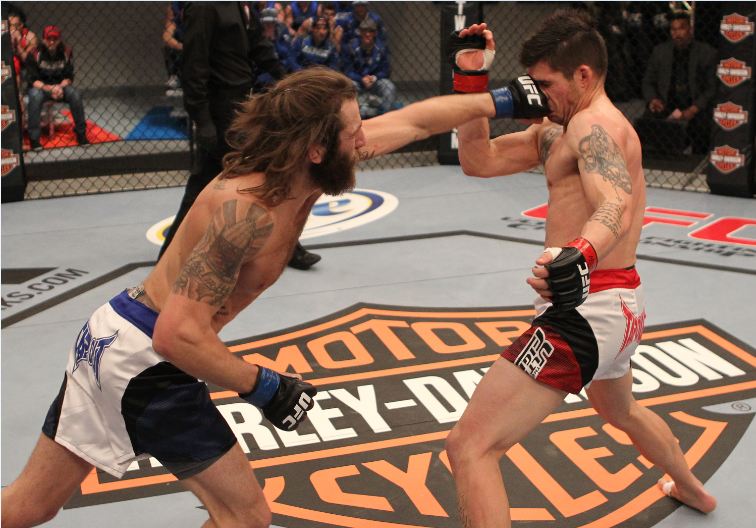 It was the most poignant moment of The Ultimate Fighter Live season. Michael Chiesa, who had defeated three opponents in the competition and was one win away from fighting for a UFC contract, had seemingly (and finally) been overwhelmed by everything that he had gone through during the filming of the FX reality show.

Sure, he had to endure grueling training and fighting, and being cut off from the outside world for what would amount to 13 weeks by the time all was said and done just like his castmates. But what made Chiesa’s ordeal worse was the fact that early in the competition, he suffered the greatest loss of all, as his father Mark passed away after a battle with Leukemia.

Chiesa went home for one day, saw his family, and was back in the house to continue his quest for the TUF title. Along the way, he became an inspiration to all who watched him compete. By the time last week rolled around, Chiesa had wins over Johnavan Vistante, Jeremy Larsen, and Justin Lawrence. All he needed to do was add James Vick’s name to that list, and he was going to be in the final in Las Vegas.

But then everything went south, as his time in the training room became an exercise in frustration. After a particularly disappointing sparring session, Chiesa pulled off the gloves and the emotions he had bottled up came out. His coach on the show, Urijah Faber, showed his support and urged his charge to not let this affect him on fight night, and Chiesa didn’t, bouncing back from a rough first round to stop Vick in the second round last Friday. He was in the final, and the journey he and his father had pictured was about to be complete.

“This whole thing is something that me and my dad discussed,” said Chiesa. “He made me promise that no matter what happened to him before or while I was gone that I needed to stay focused and pursue this because you only get so long in your life to pursue your dreams, and if your dream is fighting, your years are somewhat limited. He knew that this is what I wanted for the majority of my life, so it was his will for me to keep going on with this thing, and I wasn’t about to break that. It was an easy choice for me to stay in this competition, but it wasn’t the easiest task to stay focused, stay training, and stay mentally tough. It’s been quite a journey, but I feel like I’ve made the most of it thus far.”

He has, and while a 7-0 (five submissions) record coming into the show is impressive, you really can’t compare it to his TUF run, which is remarkable for anyone who has survived the new live format. In the past, TUF was filmed over six weeks, and then the fighters had a lengthy break before coming back for the finale card. There is no such luxury here, with the 13 week live stint forcing the finalists – Chiesa and Iaquinta – to each fight five times in order to win the competition.

“There’s really no way to prepare to be gone for this long,” Chiesa admits. “We were talking about this the other night actually. Before we got here, we were like ‘13 weeks, that’s not bad; a week flies by like nothing, this will be easy.’ But after you get here, you realize ‘man, I’ve been gone for a quarter of a year.’ It kind of blows you away because a quarter of a year is a long time.”

Luckily, Chiesa and his teammates quickly formed a bond, and when you consider that his teammate from back home in Washington, Sam Sicilia, was there as well (even though he was on the rival team led by Dominick Cruz), the time didn’t go faster, but it did become more bearable.

“It’s been a great journey, and one thing that’s made it that much better and that much easier for me was the team I was on,” said Chiesa. “I’ve got great coaches and great teammates, and I feel like we had the perfect mix. They’ve been very supportive and we all supported each other. Everybody’s had some trials and tribulations over the 13 weeks, and being surrounded by good teammates and good guys, as well as having my big brother Sam Sicilia in the house, it always helped and made it a great experience. I know when it’s all said and done, I’m gonna miss this place.”

There is business to tend to first, and that means another tough fight this Friday against his Team Faber squadmate Iaquinta. The poker-faced New Yorker has been impressive throughout, showing not just talent, but an ability to gut out some tough wins. But then again, Chiesa has made that his calling card. He may not always be pretty in the Octagon, but he finds a way to take you where you don’t want to go and beat you.

“A lot of people back home know that even before I got here, I’ve always had a crazy will to win,” said the 24-year old from Spokane Valley. “I’ve been in some tough fights, I’ve been in some deep water, but I’ve always pushed through. I’m not a quitter. It doesn’t matter how it goes in a fight, 15 minutes is a long time to fight somebody, and you can make a lot of things happen. I definitely look back at my experiences here and my experiences training to find a way to push myself through tough fights. Fighting three times in three weeks, it’s tough, but as long as you’re injury free, it’s not as bad as what people make of it. All the nerves of fighting have just gone away, and I’m just ready to go out there and have fun and let it all hang out.”

And win or lose, you know what he’ll be doing as soon as he gets home.

“First thing I’m gonna do when I get home is definitely spend some time with my family,” he said. “Then I’m gonna figure out where I’m gonna go with my career, and where I’m gonna live. I moved out of where I was living right before I came here, so I look homeless and I am homeless. (Laughs) So I’m going to find myself somewhere to rest my head.”

You kind of get the feeling that Michael Chiesa is going to be just fine.