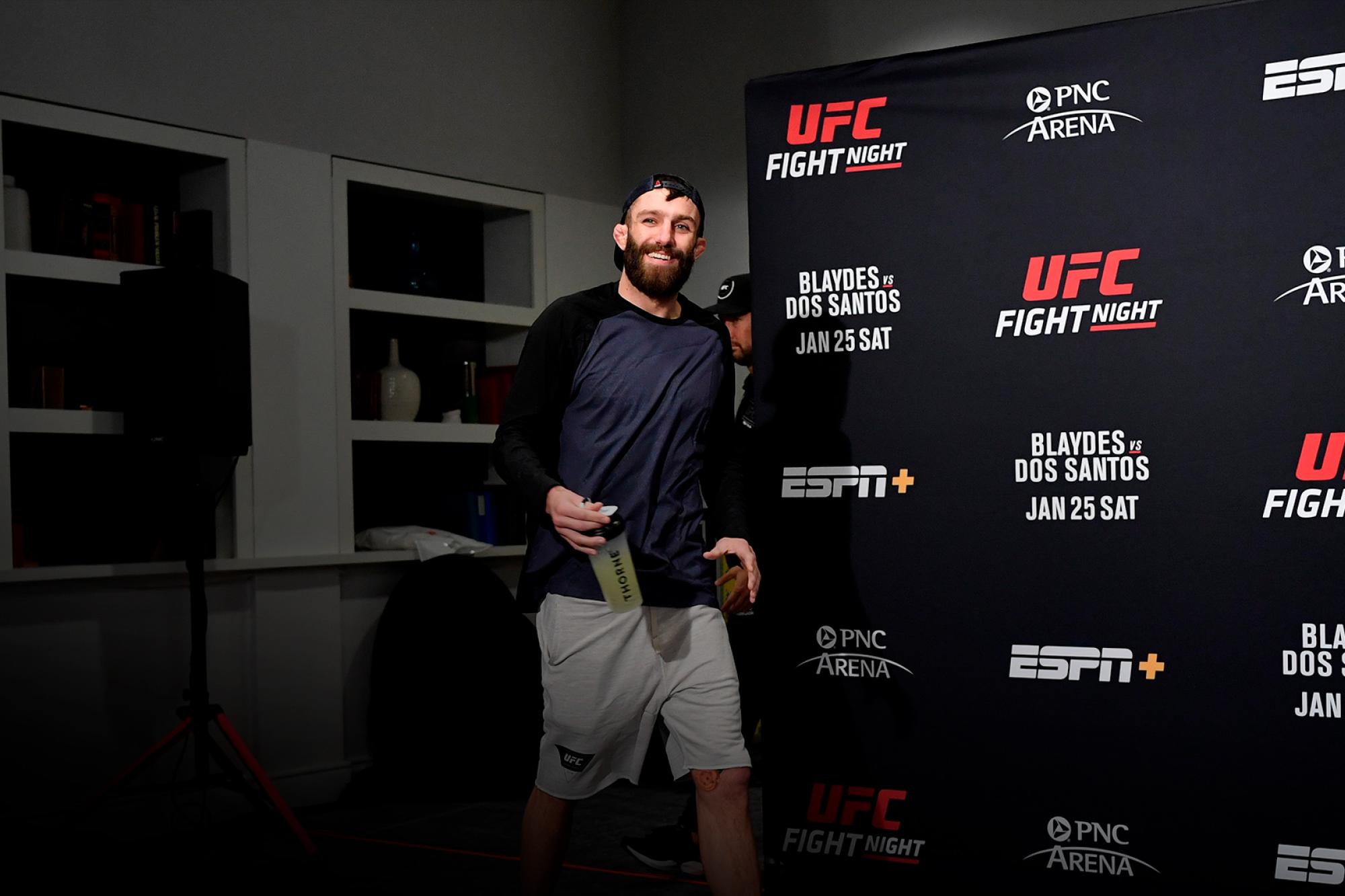 Michael Chiesa Making The Most Of The Down Time

From skateboarding to binge-worthy TV shows, Michael Chiesa has made the most of sheltering in place.
By E. Spencer Kyte, on Twitter @spencerkyte • Apr. 20, 2020

For welterweight contender Michael Chiesa, the first few weeks of dealing with the COVID-19 situation made him do something he’s often reticent to do: take time to actually let his body rest and heal.

“I’m always in the gym after a fight. No one can ever get me to relax after a fight; I’m always fired up and I want to get back to training,” explained Chiesa, whose Instagram reveals he’s rocking a Don Frye-inspired moustache while being stationed on the sidelines. “I’m too fired up after a fight and I’m not a guy to really take time off, so this has forced me to sit back.

“It actually hasn’t been too bad,” he said of his “shelter-in-place” status. “I kind of had a lot of little nagging injuries, so resting the body was good and I’ve been able to maintain a decent level of fitness. I was working out at home and then I got a hold of my strength coach and he gave me the code to the gym, so my fiancée and I will go there and I’ll be able to lift and do some type of conditioning.”

The Ultimate Fighter winner competed at the end of January, registering his third consecutive victory in as many appearances since shifting to the 170-pound weight class with a unanimous decision win over divisional fixture Rafael Dos Anjos in Raleigh, North Carolina.

The triumph elevated the Spokane, Washington native into the thick of the title chase in the welterweight division, where the Top 15 has been undergoing major renovations over the last couple years, and should have him positioned for another marquee assignment once he’s ready to return. But rather than hustle back into the gym and start thinking about what comes next, Chiesa, like innumerable others, has been forced to adjust his day-to-day routine.

Here’s how the eighth-ranked UFC welterweight has been passing the time.

“When quarantine first started it was Tiger King; that was right off the get-go and this was before the rage,” he said of the documentary series sensation that has easily been the most talked about viewing experience over the last several weeks. “This was before everybody was talking about it and it had just popped up on Netflix.

“It’s just funny; that’s all it is,” he said when I asked for a sales pitch, seeing as I’m one of the few people in North America who hasn’t watched the multi-part series that has made Joe Exotic and Carole Baskin household names. “Imagine like 50 percent Joe Dirt, 25 percent Ace Ventura, and then 25 percent Dateline murder show.

“It’s this good mix of weird s*** going on because you’ve got the meth heads, you’ve got the lady (Baskin), dudes with a hundred wives; it just this weird mix of stuff. It’s like watching the two longest trains in the world colliding — it’s going to take forever for that crash to end, but you’re sitting there watching the sequence of these cars piling up on top of each other, bursting into flames… and then you’re still left hanging, so I would definitely waste the time and just binge it one night.

“I think we did six episodes the first night and the last two in the morning,” he added. “I could have stayed up and watched them, but my fiancée fell asleep and when we started the series, she was like, ‘You can’t watch them while I’m sleeping.’ I loved it. It was awesome.”

Quarantine Pro Tip: follow Chiesa’s lead and don’t watch ahead of your partner if you’ve started a series together.

Just as I have yet to dive into the whole Tiger King experience (yet), Chiesa had yet to enter the world of Walter White, Jesse Pinkman, and the crystal meth trade in Albuquerque, New Mexico prior to being forced to spend a little more time at home and indoors in recent weeks.

“I don’t really watch a lot of TV,” said the 32-year-old, who submitted Al Iaquinta to close out an emotional run on Season 15 of The Ultimate Fighter nearly eight years ago. “I love to grapple and do jiu-jitsu, so that’s my hobby, and I watch the news when I come home at night. I knew how good it was — I remember hearing all about it — and I just thought, ‘This is one I’ve got to watch.’

“Bryan Cranston is a great actor and holy crap what a ride it was!” he said excitedly. “I couldn’t imagine watching that show over the course of however long it took — a few years — because I watched it in a week and I would go to bed at night thinking, ‘I could stay up and watch this non-stop.’”

Everyone who has watched the show fully understands this feeling.

“I’ve started skateboarding again and that has consumed a lot of my time,” said Chiesa, who has posted several videos of his exploits on his Instagram page and says he usually rides for three or four hours a day. “Skateboarding was the first love of my life, so I’m enjoying being out here.”

Not only has the current situation given the 21-fight veteran a chance to get back on his board and reacquaint himself with the local skate park, but it has also reminded him of some of the major lessons that skateboarding taught him during his formative years, many of which carry over nicely to his professional life inside the cage, as well.

“The one thing it taught me is — it’s not even about how many times you have to try and fail before you achieve something; it’s more about how much of a beating you take. It’s a very physical sport,” he said. “You learn how to take a beating and keep going.

“Anybody that wants to disregard what I’m saying, I would challenge them to run in a slow jog and then just jump up and slam down into the concrete. How many times are you going to be willing to run, jump, and slam into the concrete? That’s something I’m glad I had growing up because it made me tough.”

As for the obvious concerns about getting hurt, Chiesa said there haven’t been any truly gnarly slams thus far, though he does expect them to come at some point.

“People always say, ‘You’re going to hurt yourself,’ but you could hurt yourself doing any kind of physical activity,” he said. “I haven’t had too many bad slams, thankfully. I’m not as consistent as I used to be (on these tricks), but now I’m starting to progress and land things that I couldn’t before. I think my mind has kind of progressed with this sport through snowboarding.

“There might be some slams coming in the not too distant future, but nothing that will hamper my fighting career.”

Like many of his contemporaries, Chiesa was a massive fan of mixed martial arts long before he pursued a career inside the cage, and like countless other diehard fans, watching fights into the wee hours of the morning used to be a regular occurrence.

“I used to have this thing where I would watch PRIDE DVDs at night when I would go to bed,” he began, explaining an all-too-familiar experience for fight fans and cinephiles. “I would fall asleep and the entire night, I would never get up and turn the TV off; I would hear the PRIDE theme song in my sleep and wake up to it.

“So I was telling my fiancée that we have to watch some old PRIDE fights. She’s seen a lot of the good fights — she’s seen the Rampage and Wanderlei fights, Shogun and Lil’ Nog — but I was like, ‘I need to show you some of the s*** show ones — the mismatches, the Dos Caras Jr. kind of stuff.’

And if you’re in the mood to check out some of Chiesa’s handiwork inside the Octagon, here are the three fights he recommends.

UFC Fight Night 80 vs. Jim Miller: “We got Fight of the Night and we had some good scrambles,” he said of his December 2015 clash with the consummate pro from Sparta, New Jersey that ended with Chiesa securing a second-round submission finish.

UFC on FOX 19 vs. Beneil Dariush: “The story with that fight is always funny because that’s when I nearly crapped my pants,” laughed Chiesa, who has shared the details of his bowel issues ahead of the bout in the past. “If you do a little backstory work, it’ll make the fight even better.”

UFC 232 vs. Carlos Condit: “The Condit fight is definitely one because of everything that went with that one,” he said of his triumph over the former interim welterweight champion, which marked his debut in the division and halted the first and only two-fight losing streak of his career.

“I hope it’s not true, but that might be the best submission I ever hit in my career,” he added.