"This is a tough fight, a huge stage, but there is no reason to stray
away from my roots on this one. I want to treat this fight in Seattle
just like I used to treat all my other fights in Seattle." - Michael Chiesa 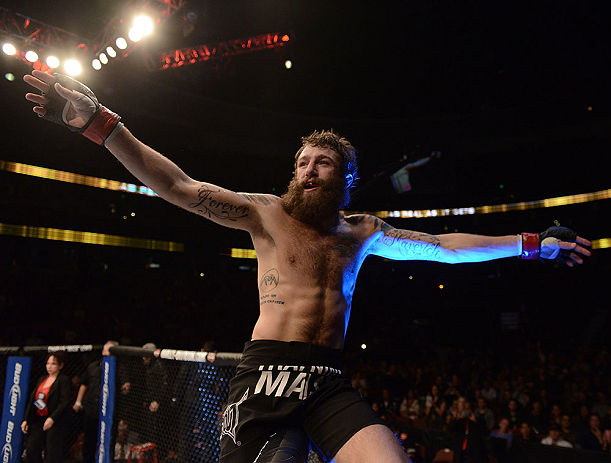 Ultimate Fighter winner Michael Chiesa is looking forward to his rematch with Seattle.

Late last year, the 25-year-old Spokane, Washington representative was scheduled to make his post-TUF debut in “The Emerald City” as part of the December UFC on FOX event. It was the closest thing he was going to get to a hometown fight; an opportunity for friends and family to come out and watch him compete on the biggest stage in the sport, but it wasn’t meant to be.

Just days before the event, Chiesa was forced to withdraw due to illness, giving the city a technical decision over the ambitious lightweight.

“I was definitely devastated, that’s for sure,” admitted Chiesa. “There was no little, minor letdown about not being able to fight. It was too perfect. I was fighting the day after my birthday, my first official UFC fight, and a good matchup for me; it was almost too perfect. It devastated me, for sure, but everything came full circle and everything happens for a reason.

“I’m a faithful man, and I have faith that it just wasn’t my night. I have got to trust in the Man upstairs that there was a reason I wasn’t supposed to fight that night, but I’m treating this almost like a rematch. I have a rematch with Seattle, and I feel like Seattle beat me. I lost to Seattle back in December, and this is my shot at redemption.”

That shot at redemption comes next Saturday night, once again as part of a UFC on FOX event.

Just like last time, Chiesa’s opponent changed in the weeks leading into the event. Originally scheduled to face Sweden’s Reza Madadi, the “Mad Dog” ran into Visa issues and was forced from the matchup, replaced by former Strikeforce title challenger Jorge Masvidal.

While a date with Madadi was viewed as an appropriate step up in competition for a budding fighter coming off a solid debut victory, Chiesa sees the opportunity to share the cage with an established contender he’s admired for a long time like Masvidal as a way to put himself on the fast track to title contention himself.

“That fight with Reza, it’s the same thing (as my last fight in Seattle) – it just wasn’t meant to be. He’s is a good fighter – everybody in the UFC is good – but when I got the call to fight him, I didn’t feel super-threatened. I’m not trying to sound arrogant in any way; he just didn’t make the hair on the back of my neck stand up. I was just like, `This is a tough guy; let’s get in shape and get ready.’

“When he fell through and I got the call to fight Masvidal, I’m saying this through-and-through, the complete truth , not because I’m fighting him: I was a fan of Masvidal’s before I ever even trained. I watched my first UFC fight when I was 13 years old. I’ve been following it ever since, and I remember watching Jorge, watching the backyard fights, and watching him KO Yves Edwards, and I was a fan.

“He’s very composed, he’s very seasoned, and he’s well-traveled. He’s a great fighter. It’s going to be an honor to fight him. I have all the respect for him in the world, but this is my time to show that I’m (part of) the new generation of fighters coming up, and I have to stand by that.”

Chiesa doesn’t just consider himself part of the next generation of fighters looking to make their impression on the UFC landscape; he also sees himself as the man who will restore prestige and value to being hailed as a member of fraternity of Ultimate Fighter winners.

With 17 domestic seasons, two Brazilian editions, and one season pitting Australia against England already in the books, there is a long list of fighters that Bruce Buffer introduces as former Ultimate Fighter winners on fight night. In recent years, those athletes have had less success than their predecessors, failing to climb the ranks the way early winners Forrest Griffin, Rashad Evans, or Michael Bisping did.

While winning The Ultimate Fighter used to mean jumping into the express lane towards title contention, many of the recent winners have either failed to find the consistency necessary to advance up the rankings or continue to find themselves stuck in a slow, methodical development pattern against middling competition.

Chiesa hopes to buck that trend and show the critics of the long-running reality TV competition that it is still capable of producing elite talent that wants to follow in the footsteps of the program’s earliest winners.

“I think it has been a long time since we’ve seen a guy come off The Ultimate Fighter and really take a step up in competition,” began the undefeated lightweight, who pushed his record to 9-0 with a second round submission win over Anton Kuivanen at UFC 157 back in February. “I went through 13 weeks – those were the hardest three months of my life, and it shaped me. I have that in my back pocket when I’m training and I get into a bad situation or a tough fight; I can look back and say, `This is not harder than The Ultimate Fighter.’

“Nothing is as hard as that was, and I take a lot of pride – it’s still hard for me to even comprehend that I won The Ultimate Fighter along with guys like Forrest Griffin, Rashad Evans, Michael Bisping; guys I looked up to. I want to represent those guys well.

“On paper, I’m in the same category as those guys, and as of late, a lot of people think (the show) isn’t producing talent, and that bugs me. People badmouth the show so much, but you don’t realize how hard of an environment that is, being secluded from everything; locked in a house with all these guys you might have to fight, and then you’ve got to go out and perform. I want to represent for all the guys that have been on The Ultimate Fighter.”

He’s also out to represent for Spokane and the whole of the Pacific Northwest too, and his style in the cage and the grizzly beard that covers his youthful face are fitting homages to the territory and training that have shaped him as a fighter.

“I’m just like Buckley’s cough medicine, man,” he laughed, citing the brand whose slogan is “It tastes awful. And it works.”

“I get out there and get the job done. If someone wins, what can you say? How are you going to take it away from them? If you’re the one that gets your hand raised, whether it was a pretty fight or an ugly fight, as long as you won, that’s what you’re looking for at the end of the day.”

For his upcoming fight with Masvidal – and rematch with Seattle – Chiesa is turning back the clock, taking the same approach he took to fighting in the city in the early days of his career on the Northwest regional circuit, with one exception.

“I fought most of my fights in my career over in Seattle, and I’m gonna treat it just like I used to back in the day. I’m going to rent a car. I’m going to do it the old school way, man, except we won’t be staying at the Motel 6.

“This is a tough fight, a huge stage, but there is no reason to stray away from my roots on this one. I want to treat this fight in Seattle just like I used to treat all my other fights in Seattle. Ultimately, just go have fun. I know that I’m going to perform very well, and I know I’m going to give the fans, my friends, and my family what they want to see.”

As far as the emerging talent nicknamed “The Maverick” is concerned, part of his responsibility when the cage door closes is to deliver an exciting fight, and to Chiesa, that means taking chances and looking to finish.

“I have a whole tool bag, a whole skill set that I haven’t shown yet, but it’s one of those things where if I get the chance to take your back and submit you, there is no way I’m letting that slide through my fingers. That is always a position I will capitalize on if it is present in a fight.

“Part of our job is to go out and not only perform, but finish the fight as fast as possible if the opportunity presents itself. You don’t want to go out there and bore the fans. Fans want to see finishes.”

Not too long from now, Chiesa will make the drive across the state of Washington, arriving in Seattle focused on finishing Masvidal, and taking another step towards reaching his ultimate goal.

Though he has the utmost respect for his upcoming opponent, the confident, unbeaten lightweight won’t let anything stand in his way, not even a fighter he’s looked up to his entire career.

“I’m in this sport simply to test myself. If I would have went back 10 years ago to when I was 15 years old and said this is what’s going to happen, I would not believe it. I’m out to prove myself wrong, to prove a lot of other people wrong, and to compete.

“A fight with Jorge is an amazing step up. For me, this is what this sport is all about. Just talking about it right now I’m getting goose bumps. I want to see where I’m at as a fighter, and I’m going to feel a lot more satisfied when I get a win over Jorge than I would have getting a win over Reza, that’s for sure.

“But come July 27th, it doesn’t matter who I’m fighting – you’re standing between me and my ultimate goal. I want to be a world champion. I dream about holding a title. I dream about knowing one day that I’m the best in the world. That’s what I’m striving for, so it doesn’t matter who I’m fighting, I’m going to bring it to you in the same way, and I’m going to find a way to win.”