Michael Chiesa: Changing of the Guard

"I look forward to showing the world that it is my time. And I have to go out there and prove that on September 5th and the only way I can do that is by beating Joe Lauzon." - Michael Chiesa 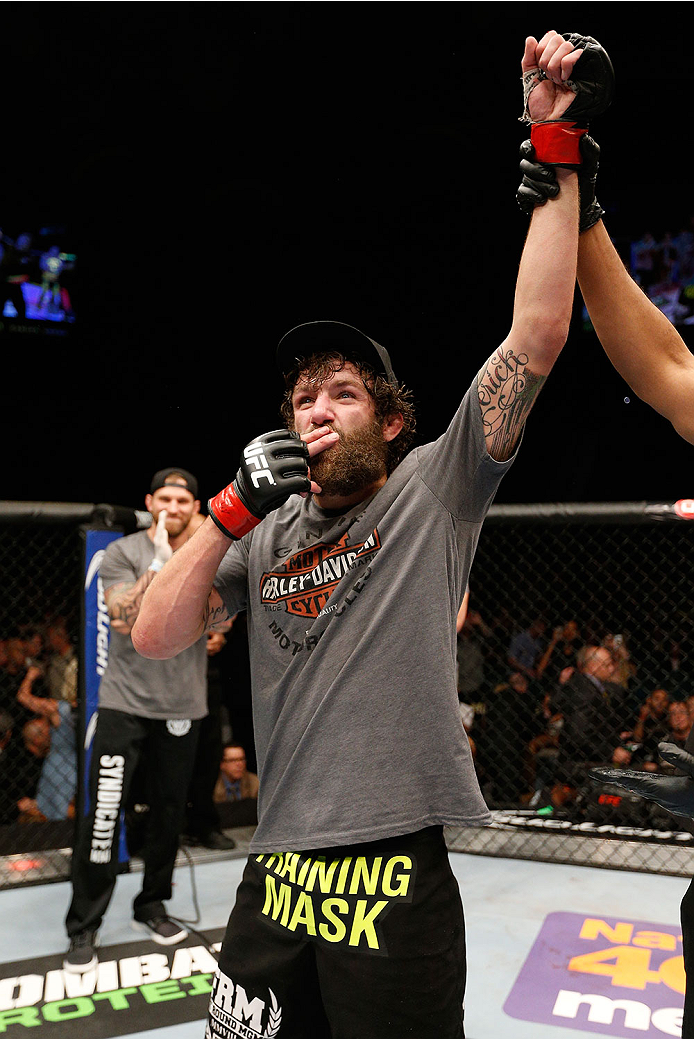 That is the general plan of events The Ultimate Fighter 15 winner Michael Chiesa has envisioned for himself and his opponent heading into this fan-friendly fracas with Joe Lauzon at UFC Fight Night: Souza vs. Mousasi.

“I’d like to have a cheeseburger with him,” Chiesa admits. “I know Joe’s got a tongue for fast food and I’m a sucker for it myself. Obviously, we both have all the intentions in the world to win and beat the crap out of each other, but, at the end of the day, I wouldn’t mind sharing a cheeseburger with him. I look forward to having a good fight with him. I look forward to showing the world that it is my time. And I have to go out there and prove that on September 5th and the only way I can do that is by beating Joe Lauzon.”

It should come as no surprise that the 26-year-old Chiesa has a specific admiration for TUF 5 alum Lauzon. Both are unassuming terrors inside the Octagon with no quit switches, a penchant for submissions, underrated striking power, gas tanks the size of China and sizeable fan bases.

The connection between the two goes beyond similarities in style, as “Maverick” remembers exactly where he was when he watched Lauzon’s famous Octagon debut knockout over Jens Pulver, admits to getting a picture with Lauzon at the TUF tryouts, and was also a TUF teammate with Lauzon’s protégé, fellow UFC lightweight Joe Proctor. With that being said, Chiesa knows from experience those positive associations with Lauzon need to be shed once the two of them are inside the Octagon.

“I’ve got all the respect in the world for him,” Chiesa said. “He’s a good guy, I’ve looked up to him, I’ve admired the way he fights and I’m super excited to fight a guy with a name, but I’m not here to just fight a guy with a name - I’m here to beat him up. There’s not a bad thing in the world I could say about him, but I have to put the hurt on him and I’m not going to put him on a pedestal. That’s the lesson I learned in the Jorge Masvidal fight - don’t put anyone on a pedestal. I put Jorge Masvidal on a pedestal and I paid the price.”

It has been over a year since Maverick’s one and only career loss to Masvidal in July 2013. Since that setback, Chiesa secured a Submission of the Night bonus - his second in the UFC - against another TUF winner in Colton Smith and, most recently, earned a unanimous decision win over the massive Francisco Trinaldo at UFC 173.

Against the TUF Brazil alum, Maverick used his relentless pressure to not only take all three rounds across the scorecards, but two of the judges saw the opening onslaught as a 10-8 round. “You have to be faithful and fearless,” Chiesa said, and his mantra means that a fighter needs to be confident in their skills and needs to always push forward, using them to win the fight.

“There are people who train and do well in the gym, but it’s different when they get under those lights,” he explains. “It’s not that they get scared, but they get out there and they’re afraid of something. There is something holding them back. For me, I have this undying will to win. For those 15 minutes, there’s not a person in this world that will shake an ounce of fear into me. When I get under those lights, I’m 100% confident with my own being that I can win the fight. You train so much for just that one 15-minute window, and you have to make the most of it. I will push myself to death to win the fight. I will do anything by any means necessary to win the fight. I know a lot of guys say that, but I feel that I have shown that.”

Up next, Maverick aims to extend his winning streak as he collides with Lauzon in the Octagon’s first event in Connecticut in nine years. Tied with former UFC middleweight champ Anderson Silva for the most Fight Night bonuses, Lauzon returned to his winning ways in December by defeating TUF 6 winner Mac Danzig. With Octagon win number 10 under his BJJ brown belt, Massachusetts’ submission magician has always been seen as an aggressive, game opponent who is a shoe-in for a Fight of the Night, which is exactly what Chiesa is hoping for.

“I think people need to tune into this fight because we’re going to steal the show,” Chiesa declares. “There’s no way this fight is going to be boring. I’ve never really been in a boring fight. Every time Joe and I go out there to fight we go out there to win, we go out there to finish. I would rather finish the guy or go out on my shield trying. I’ve read it interviews where Joe talks about the same thing. Fans want to see finishes. Joe’s got 16 fights in the UFC, 12 bonuses. I’ve only had five fights and I have two bonuses and I have them for a reason. I’m exciting. That’s what this fight is for; this fight is for the fans. I hope I get the vintage Joe Lauzon that comes forward and throws heavy punches and goes for crazy submissions. That’s the fight I’m training for.”

This Friday, two of the most entertaining finishers will clash inside the Octagon as Chiesa takes on Lauzon. “I have got to prove that the torch is being passed,” he said. “I want to be somebody that people will remember throughout the duration of the UFC’s life. I don’t want to be just some guy that won The Ultimate Fighter - I want to cement a legacy.”

Afterward, maybe Chiesa and Lauzon can strike up a Lyoto Machida vs. Mark Munoz deal: winner pays for dinner.