Sanford MMA Head Coach Henri Hooft Has Watched Michael Chandler's Rise Over The Years And He Gives Us The Reason That Chandler Will Win The Belt At UFC 262.
By Gavin Porter, on Twitter: @PorterUFCnews • May. 12, 2021

For years, fight fans clamored to see Michael Chandler compete with the world’s best fighters. There were people that doubted the hype, stating that Chandler couldn’t compete with the top lightweights that the UFC had to offer. So, the UFC matched “Iron” up with one of the toughest contenders in the division, Dan Hooker.

The three-time Bellator champion needed just 150 seconds to silence the doubters and announce his presence as a true title challenger.

Chandler’s knockout victory over Hooker in January came as no surprise to longtime head coach Henri Hooft, who has seen Chandler prove people wrong for years.

“As a coach I’m very proud of Michael. It was a long journey, being in Bellator winning the title three times and then moving to the UFC and getting a dominant win. The ride has been very fast and it’s great to see and couldn’t be happening to a better guy than Michael Chandler,” Hooft told UFC.com. “They say you’re only as good as your last fight, well, look at how Michael Chandler fought Dan Hooker.”

Hooft could feel a shift in Chandler’s energy after he defeated Hooker. The matchup with the New Zealander was a challenging one and getting past him reaffirmed that he’s always belonged fighting at the highest level. The incredible victory also propelled him to fight for the recently vacated UFC lightweight title at UFC 262.

“There was a big switch energy wise, you can just see it. It’s like he is reborn. He fought everybody already and beat everybody already,” Hooft said of Chandler. “It’s a new start for him at the highest level and that gives him that extra energy that you need. You see how energetic he is, and he will do what he has to do to win the belt on Saturday.”

Chandler’s opponent, Charles Oliveira, has had a completely different path to his first UFC title shot. “Do Bronx” joined the UFC in 2010 and has battled his way through some of the toughest featherweights and lightweights on his way to securing the most submission wins in UFC history. Currently, the Brazilian is on an eight-fight win streak, scoring seven finishes as he’s worked his way to the top of the division.

With that much experience and with his particular skill set, Hooft knows that Oliveira is a dangerous opponent, and he believes that he’s more than deserving of the opportunity to fight Chandler for UFC gold. 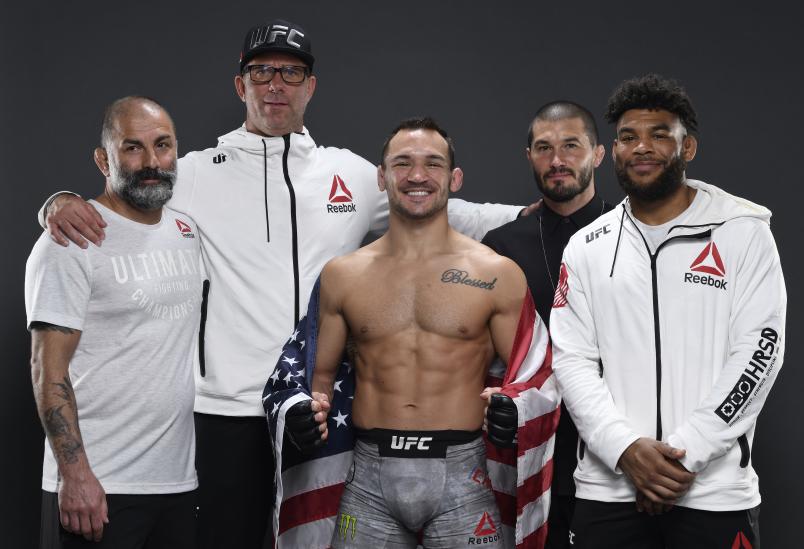 Michael Chandler poses for a portrait after his victory during the UFC 257 event inside Etihad Arena on UFC Fight Island on January 23, 2021 in Abu Dhabi, United Arab Emirates. (Photo by Mike Roach/Zuffa LLC)

“[Oliveira] is champ material and he’s proven that against very good guys and he’s good everywhere; he’s very experienced and he’s always very relaxed. I like him as a person; he’s not a trash talker, he is serous and that makes him dangerous. I respect him a lot and that’s why I know he’s one of the toughest matchups for anyone, including Michael Chandler,” Hooft said of Oliveira. “Both of these guys deserve this fight and it’s the type of fight that fans won’t want to miss.”

Hooft thinks that Oliveira’s explosiveness and his size will be key challenges that Chandler has to face when the two clash inside Toyota Center on Saturday. But he’s confident that Chandler’s wrestling skills and his natural power will be a deciding factor in the bout.

And while the Sanford MMA head coach admits that anything can happen in a fight, he’s confident that Chandler will leave Houston with the gold he’s always wanted.

“Honestly, it didn’t matter who Michael fought for the belt because at the end of the day you have to beat the guy in front of you to become champion and Michael’s skills and his mind can’t be beaten right now,” Hooft said. “I see him having more fun and he’s smiling more. He’s happier and you need to feel good to be good. Michael has momentum and he’s going to capitalize on it.”